A target of late 2021 or early 2022 has been set by natural gas venture Gazoduq Inc., which is planning a 1.8 Bcf/d pipeline to supply a liquefied natural gas export project on the east coast of Canada, Energie Saguenay. 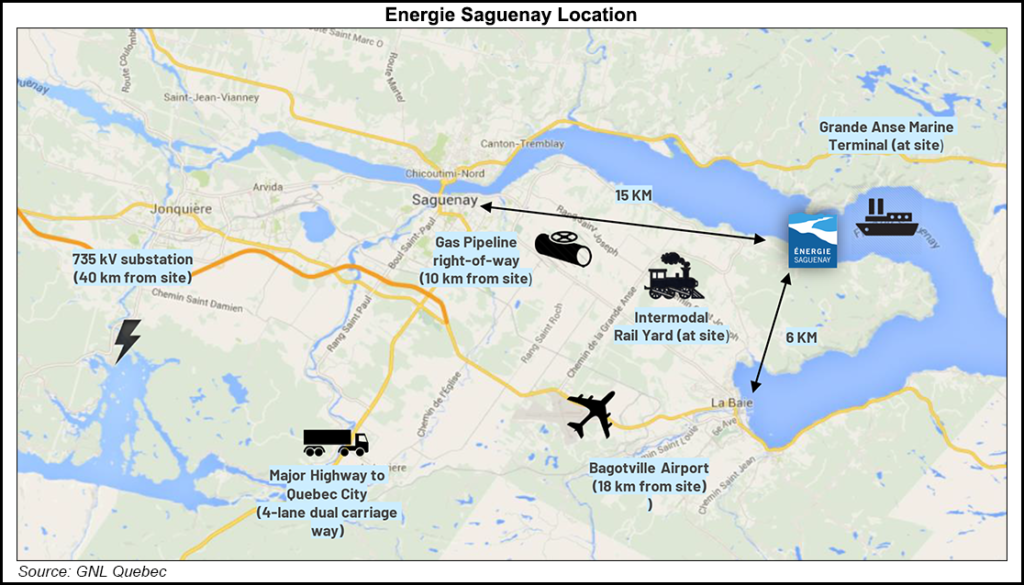 “The start of the construction phase cannot be delayed without significantly affecting the project schedule,” said Gazoduq in a detailed plan filed at the federal government’s five-month-old Impact Assessment Agency of Canada (IAAC).

“The success of the project is based on commissioning the natural gas transmission line and compressor stations in the fourth quarter of 2024. This will require a strictly controlled but achievable approval schedule and project execution.”

For an estimated US$3.8 billion, Gazoduq would bury 780 kilometers (470 miles) of jumbo pipe, 42 inches in diameter. The line would run from Ontario to the proposed US$7.5 billion Energie Saguenay LNG terminal 210 kilometers (210 miles) east of Quebec City.

The export service for western Canadian gas was invented in California. Gazoduq and the LNG terminal, named Energie Saguenay after its site on the north shore of the St. Lawrence River, belong to the GNL Quebec partnership of Breyer Capital in Menlo Park and Freestone International in San Francisco.

The terminal would be capable of exporting 11 million metric tons/year, or roughly 1.5 Bcf/d. The project includes liquefaction equipment, storage facilities and marine shipping infrastructure. It is slated to start operations in 2025. If built, the facility would also be the first of its scale to be powered by hydroelectricity from a preexisting local grid.

The mammoth pipeline is advancing after hotly contested legislation passed last year that created the IAAC. The agency conducts project reviews that include environmental impacts, but also explore the effects on women, natives, health and climate change. The pipeline is the first to seek IAAC approval.

The proposed new pipeline would only cross paths with less than 1% of Ontario’s population and less than 4% of Quebec residents. Just 60 kilometers (36 miles), 8% of the line would cut through farmland.

The route and the IAAC’s mandate also led to special emphasis by Gazoduq on earning cooperation from natives. The pipeline project is in constant communication with 25 Quebec tribes, along with an array of federal, Quebec and Ontario government agencies.

“Although distances between potentially impacted Indigenous groups and the PPA vary from 10-190 kilometers (six-114 miles), the PPA covers lands that are subject to a comprehensive land claim agreement or self-government agreement by almost every group concerned,” Gazoduq said.

“In light of Indigenous groups’ high expectations regarding project economic benefits, Gazoduq has been an early adopter of practices that favor Indigenous contractors and suppliers,” according to the company’s IAAC filing.” Gazoduq also intends to maintain active Indigenous involvement in future work planned for the construction and operation phases.”

The Liberal government in Ottawa, the 32-member Bloc Quebecois in the Canadian Parliament and Quebec’s Coalition Avenir administration, have remained neutral on the pipeline and terminal proposals, as they await results from the impact assessment.

Other LNG export terminals have been proposed for Canada’s east coast, including Pieridae Energy Ltd.’s 1.4 Bcf/d Goldboro LNG project and LNG Ltd.’s Bear Head terminal, both of which would be located in Nova Scotia.