Although the focus has been on the “aging work force” in the oil and natural gas industry, retirement makes up just 15% of total attrition in the natural gas transmission industry, according to a new study released by the INGAA Foundation Tuesday.

The biggest reason cited for pipeline industry attrition is better job opportunities (53%), followed by personal reasons, career change, work environment and other, said Brad Kamph of Santa Ana, CA-based Interliance Consulting Inc., which conducted the study. A large part of the turnovers come from employees who have been with companies for three to five years, yet most transmission companies don’t even measure nonretirement attrition, he noted.

The study revealed a “major disconnect” between top executives and managers on work force issues, he said. Many executives believe their gas transmission companies are adequately managing their work force and knowledge assets, but low-level managers report that pipe companies are not committing sufficient time or resources, according to the report, “Securing Our Future: Developing the Next Work Force.”

An estimated 29% of pipeline executives were “very confident” of their company’s ability to maintain their work force and knowledge assets, while less than 3% of managers, operations and human resources respondents were equally confident, it noted. Most managers believe the work force will have significant impact on their ability to do business within two years.

This disconnect is “part of the big bridge that we’re going to be working to overcome,” Kamph said.

The INGAA Foundation study was based on interviews with 30 executives, and approximately 100 surveys of managers, operations and human resource professionals within the natural gas transmission industry and other data sources.

The study further showed that most transmission companies are taking a “very piecemeal” approach to dealing with work force attrition issues, rather than an integrated, comprehensive strategy, Kamph said. He noted that companies need to focus on four aspects: supply of work force, recruitment efforts, developing skilled employees and maintaining their work force.

The study noted that pipeline companies attempt to compensate for their 13% average annual attrition by training new employees faster, rather than focusing on retaining existing workers.

Pipeline employees are changing jobs faster than in the past, according to the report. More than one-third of nonretirement attrition is the result of workers moving within the industry and most human resources professionals expect that figure to stay the same or rise. The study said only one in eight companies has a goal for nonretirement attrition and only one in three measures employee satisfaction, the key predictor of future attrition. It estimated that the present level of attrition costs an average company more than $10,000 annually per worker.

Pipeline companies blamed a lack of time and resources for the limited strategic planning and implementation of work force initiatives, the study said. “When asked what actions are under way, 49% of respondents reported increased efforts in developing new employees, 30% reported increased recruitment efforts, 13% reported retention efforts, and 9% reported initiatives to increase the supply of skilled technical candidates.”

The study urged pipeline companies to offer phased retirements and longevity benefits, and improve employee satisfaction to reduce attrition in the work force.

Managers surveyed for the study also expressed concern about the skill level of the work force. “More than half of managers report that present skill development for technical employees is inadequate. Seventy-eight percent of managers expect work force issues to have a significant impact on the company capability within five years. with loss of knowledge mentioned most frequently,” it said.

The INGAA Foundation study projects that natural gas transmission companies will need to add 3-5% annually to their work force over the next five years, putting an additional burden on the recruitment resources. “Experienced engineers are the most difficult technical employees to recruit. Human resources reports that they hire four experienced employees for each new graduate. This level may not be sustainable with the expected growth rate of 3-5% and the 10% attrition out of the industry each year,” it said.

According to the study, at least 5,200 new technical workers must be brought into the natural gas transmission industry each year to make up for attrition caused by retirements or workers leaving the industry. An additional 1,500 annually of new-hires will be required due to anticipated growth of transmission companies, it said. And intra-industry recruitment will create the need for 1,800 more hires.

The present level of 8,600 new-hires annually for the gas transmission industry is projected to rise by 1,600 employees in five years, the INGAA Foundation study said. 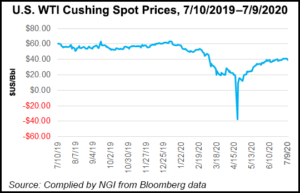 U.S. producers have played a critically important role in rebalancing the global oil market after Covid-19 and will continue to do so going forward, according to Organization of the Petroleum Exporting Countries (OPEC) Secretary General Mohammad Sanusi Barkindo. Although tensions have long simmered between the Saudi-led cartel and the Lower 48 onshore segment, “there is…