Pioneer Natural Resources Co. more than tripled the number of rigs it has deployed in the Permian Basin’s Spraberry and Wolfcamp formations during the first quarter of 2014, a move that helped the company beat its production guidance and grow its oil production. 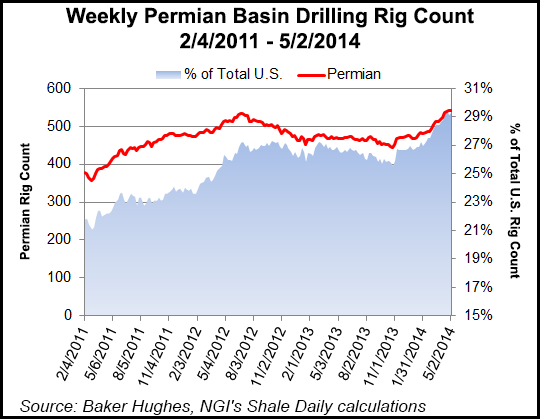 Pioneer attributed the growth in production to successful drilling programs in the Permian sub-basin, the Midland, specifically horizontal drilling targeting the Spraberry and Wolfcamp formations, as well as the Eagle Ford Shale in South Texas, and to a full recovery from weather-related production curtailments during 4Q2013.

“The company delivered another great quarter, with strong earnings, production exceeding expectations and continued impressive horizontal well performance in the Spraberry/Wolfcamp and the Eagle Ford Shale areas,” said CEO Scott Sheffield. “Importantly, oil production grew 9% in the first quarter of 2014 as compared to the fourth quarter of 2013.”

The company is currently operating 16 rigs in the Spraberry/Wolfcamp, up from five rigs at the end of 2013. According to Pioneer, the rigs deployed there are drilling mostly three-well pads. The company said it expects to have 125 wells in the Spraberry/Wolfcamp and the Eagle Ford placed into production during the first half of 2014, increasing to 175 wells during the second half of the year.

“Looking beyond 2014, we expect to continue to ramp up our horizontal rig count in the Spraberry/Wolfcamp by five to 10 rigs per year, and more than double production by 2018 as compared to 2013,” Sheffield said.

During 2013 and the first quarter of 2014, Pioneer said it placed 23 horizontal oil wells into production across its northern position in the Spraberry/Wolfcamp. Of those 23 wells, the company said production data from 17 wells targeting the Wolfcamp A, B and D intervals, and six wells targeting the Lower Spraberry Shale, continued to support strong estimated ultimate recoveries (EUR) and internal rates of return (IRR).

According to Pioneer, EURs ranged from 575,000 boe to 1 million boe across the various Spraberry and Wolfcamp intervals; before-tax IRRs ranged from 45% to more than 100%.

Pioneer said it is also currently operating 11 vertical rigs in the Spraberry field, with about 200 wells expected to be drilled in 2014. About 90% of the vertical drilling in the field is to target the Strawn and Atoka intervals.

“With only 11 rigs running, vertical production is expected to decline in 2014 by approximately 10%,” Pioneer stated. “The company expects to further reduce its vertical rig count going forward, allowing it to devote more of its capital to higher-rate-of-return horizontal drilling.”

The total number of rigs the industry operates in the Permian Basin has been on the rise over the past six months, reaching 542 on April 25, according to Baker Hughes data. That’s up from 448 rigs on October 18.

In the Eagle Ford, Pioneer said it placed 12 wells targeting the upper portion of the play into production through mid-April, as the company continued its downspacing and staggering program (see Shale Daily, Nov. 6, 2013).

Analysts were agog about Pioneer’s performance.

Wells Fargo Securities LLC analysts Gordon Douthat and David Tameron issued an outperform rating for Pioneer stock and said the news was positive. “[The] transition from resource growth to production growth [is] underway with first quarter production ahead of guidance, us and [Wall Street],” they said. “[The] 2014 ramp [is] backend weighted, but [this is] a good start to the year in our view.”

BMO Capital Markets Corp.’s Phillip Jungwirth and A.J. Donnell concurred on Wednesday, issuing a market perform rating for Pioneer. “Bottom line, a solid quarter, and while 2Q is weaker than expected, Pioneer looks poised for strong growth in 2H, and we’re raising estimates slightly following the release,” they said. “That said, our view that Pioneer offers minimal upside on a valuation basis is unchanged…”

Natural gas futures were trading slightly higher early Thursday as traders awaited the latest government inventory figures and as a wave of hotter than normal temperatures in the forecast continued to point to strong demand in the weeks ahead. The August Nymex contract was up 0.7 cents to $1.785/MMBtu at around 8:40 a.m. ET. Estimates…