Linn Energy LLC on Monday added 235,000 net acres to its industry-leading position in the gassy Hugoton Basin in a $340 million transaction with Pioneer Natural Resources Co. Pioneer also said it would sell Barnett Shale properties to an undisclosed buyer for $155 million. 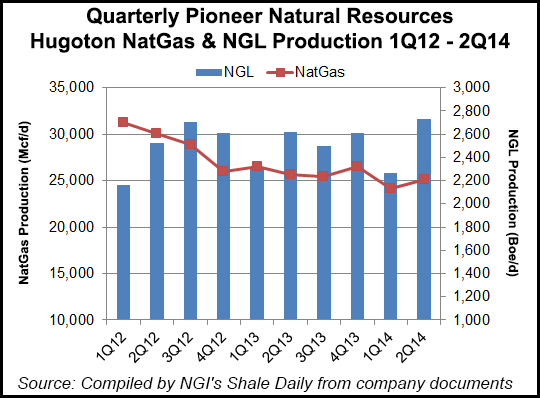 The Pioneer properties are producing 40 MMcfe/d, 60% weighted to natural gas, with a shallow base decline of around 6%. Total proved reserves are estimated to be 340 Bcfe, 95% proved developed producing.

In May Linn became the largest producer in the Kansas basin in a 500,000 net-acre deal with ExxonMobil Corp. (see Shale Daily,May 22). Linn paid BP plc $1.025 billion in mid-2012 to acquire gas operations in the Green River Basin of Wyoming.

“This acquisition further strengthens Linn’s significant position in the Hugoton Basin and reinforces our commitment to the previously announced strategic portfolio improvement plan,” said CEO Mark E. Ellis. “Following our acquisition from BP in 2012, this year’s announced trade with ExxonMobil, and [Monday’s] announcement with Pioneer, Linn will become the largest producer in the field,” with pro forma production of 275 MMcfe/d.

The assets being sold represent all of Pioneer’s interests in the Hugoton field, including all of its producing oil and gas wells, all of its interest in the Satanta gas processing plant and all other associated infrastructure.

The deal would give Linn two gas processing plants in the basin with total capacity of 690 MMcfe/d, including Pioneer’s 51% stake in the Satanta gas plant, which has 240 MMcfe/d of capacity.

All of the Pioneer acreage is held by production, with close to 1,200 producing wells. Linn has identified 180 future drilling locations and 150 recompletion opportunities. As well, the assets have an estimated reserve life of 23 years and proved reserves of around 340 Bcfe.

To help finance the Pioneer asset purchase, Linn agreed to sell its rights in the Woodford and Meramec horizons, about 26,000 undeveloped acres, for $90 million to an undisclosed party. The stacked formations are within the Anadarko Basin where the Woodford Shale and Mississippian Lime overlap.

Meanwhile, Pioneer, based in Dallas, also plans to exit the Barnett Shale in North Texas through a sale to an undisclosed private company for $155 million. The transaction is set to close by the end of September.

The financial and operating results related to the Barnett activities have been reflected as discontinued operations since late 2013, when Pioneer announced that it planned to sell these assets. Net production from the Barnett averaged 10,300 boe/d during the first six months of 2014.

“The sale of these assets will allow us to strategically redeploy capital to our core, oil-related Spraberry/Wolfcamp assets in the Permian Basin of West Texas where we are successfully transforming the substantial resource potential we delineated in 2013 into strong production growth,” said Pioneer CEO Scott Sheffield.