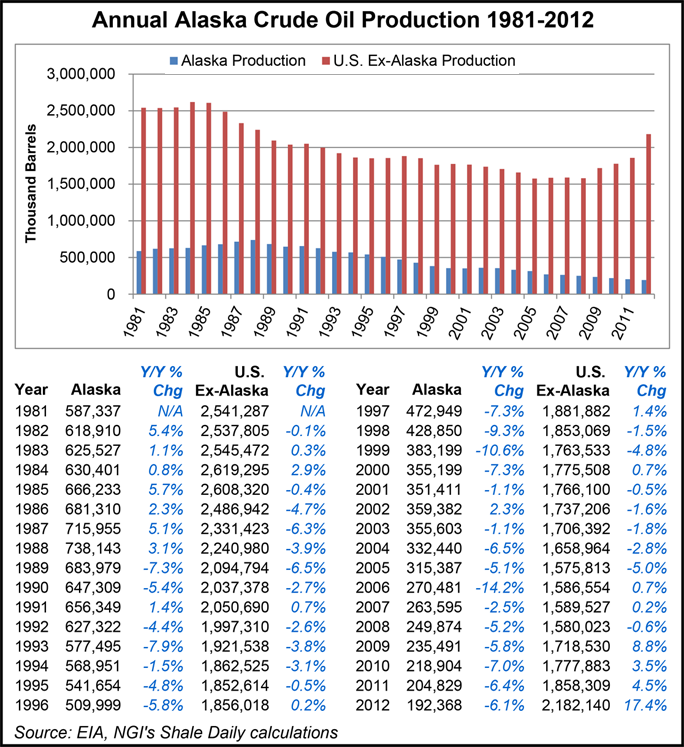 “The sale of our Alaska asset will allow us to strategically redeploy capital to our core, oil-related Spraberry/Wolfcamp asset,” Sheffield said. “We are currently delineating multiple prospective horizontal targets (Wolfcamp, Jo Mill and Spraberry shales) across more than 600,000 gross acres in the northern part of this asset. We believe this area holds recoverable resource potential of more than three billion boe.

Last year Pioneer drilled 691 wells in the Spraberry field and currently operates more than 7,000 wells there. The company has about 900,000 gross acres (640,000 net) in the field. Horizontal Wolfcamp Shale and Jo Mill wells drilled last year led the Pioneer to shift “a significant portion” of this year’s drilling from vertical to horizontal.

Earlier this year, Sheffield credited the Spraberry, along with the Wolfcamp Shale and Eagle Ford Shale for driving a 10% increase in oil production during the first quarter (see Shale Daily, May 6).

Net production from the Alaska subsidiary being sold averaged 4,000 boe/d over the first nine months of 2013, Pioneer said.

Wells Fargo Securities analyst Gordon Douthat said in a note Friday that the firm had expected the Alaska unit to fetch $1 billion. “Despite the lower value than we had modeled, the transaction makes a lot of sense in our view as proceeds will be to accelerate [Pioneer’s] core area in Northern Wolfcamp/Spraberry,” Douthat said. “Given the company’s approximate $30 billion market cap, Alaska was simply not a needle mover for the company as [Pioneer] is quickly becoming a Permian pure play…”

Pioneer entered Alaska in 2002, “recognizing the opportunity to bring an independent’s mindset of streamlining processes and reducing costs to a landscape previously dominated by major oil companies who left many medium-sized prospects untapped,” Pioneer said on its website. It discovered the Oooguruk oil field on the North Slope in 2003. Oooguruk was approved as the company’s first field development project in Alaska in 2006.

The field is five miles offshore in five feet of water. With first oil production from Oooguruk during the second quarter of 2008, Pioneer became the first independent to operate a producing field on the North Slope. Pioneer’s Alaska drilling program has historically focused on drilling the Kuparuk and Nuiqsut intervals from a man made island. More recently, Pioneer has had success drilling into the Torok interval. Pioneer its Alaska assets hold 125 to 150 million barrels of net resource potential.

“The current Pioneer Alaska team is very impressive and has the experience to develop the significant resource potential they have identified and help us grow the business in the future,” said Caelus CEO James Musselman. “We are attracted to Alaska because of the enormous geologic opportunity as well as the incentives, such as SB 21, that the state has put in place to encourage energy investment by independent oil and gas companies.”

SB 21 was passed earlier this year. The legislation cut taxes on oil production with the goal of helping to refill the state’s Trans Alaska Pipeline system (see Daily GPI, April 16).

Musselman was not immediately available to comment further on the company’s plans, a spokesperson said. Dallas-based Caelus Energy LLC is involved in a range of energy projects including conventional and unconventional exploration and production. Prior to establishing Caelus in 2011, Musselman was chairman and CEO of Kosmos Energy and president and CEO of Triton Energy, both independent oil and gas exploration companies.

The transaction has an effective date of Oct. 1 and is expected to close by the end of the year. Pioneer said the sale is expected to result in a noncash loss of about $350 million, which will be recorded in the fourth quarter.