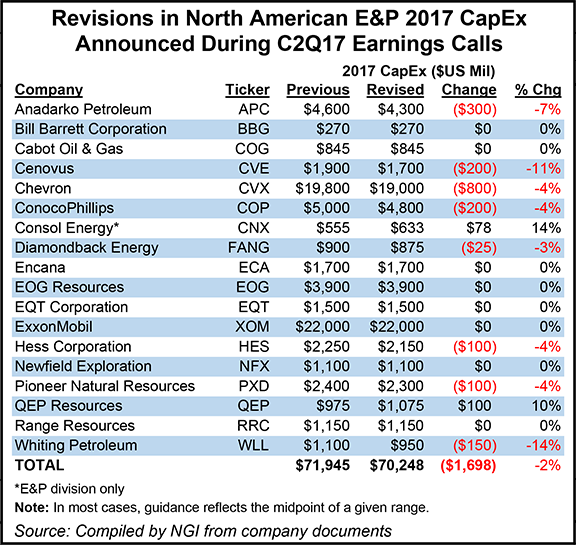 The Dallas explorer produced 259,000 boe/d between April and June, up 4% sequentially and at the top end of the guidance range of 254,000-259,000 boe/d. Growth was driven by the Spraberry/Wolfcamp program in the Permian’s Midland sub-basin, where output increased 6% from 1Q2017.

However, completions activity in West Texas has fallen behind because of “unforeseen drilling delays,” which will pressure Permian growth through the rest of the year, CEO Tim Dove said.

“To maintain efficient operations, we have chosen not to accelerate activity in order to catch up in the second half, especially in light of the current commodity price environment,” Dove said. “Our current rig count remains the same, but we are deferring 30 Spraberry/Wolfcamp completions that were planned for this year into 2018.

“This will result in a reduction in 2017 capital spending of approximately $100 million and production growth closer to the low end of our guidance range of 15% to 18% for 2017. This decision is consistent with our longer-term objective to grow production efficiently by maintaining a steady pace of activity, spending within cash flow, maintaining a strong balance sheet and improving corporate returns.”

Pioneer now expects to place around 230 wells on production this year, versus a plan of 260 wells. Associated capital expenditures have been reduced to $2.3 billion from $2.4 billion.

“The 2017 plan assumed that approximately 260 horizontal wells would be placed on production during the year, weighted heavily to the second half of the year (approximately 150 of these wells),” management noted. However, drilling delays through the first half of this year led to 11 wells not being placed on production as planned, and many wells were ramped up later than expected.

Around one-third of the 99 wells placed on production since January occurred in June.

“This resulted in significant lost production days,” management said. “The impact of these delays is a reduction to the full-year Spraberry/Wolfcamp horizontal oil growth forecast of approximately 8,000 b/d.”

Dove explained during a conference call Wednesday that the delays were the result of “unexpected changes in pressure regimes in the fields. So what we’ve seen is increasing pressures in some of the shallow formations,” which tend to be gassy.

“That means we have to mud up substantially to deal with that problem…These pressures have changed in a subtle manner such that we now find we had a higher percentage of what we kind of refer to as ”train wreck wells,’ where we have all kinds of problems with lost circulation and other issues because of this pressure change.

The four-string casing increases well costs by around $300,000-400,000 per well, and it increases drilling time by five days or so, Dove said.

“But we’re also nickel and diming away other cost of these wells to try to get that money back, including changing out surfactants and other things to try to reduce costs and reduce days. So we’re not going to stand pat with this increase. We’re going to chip away at it and produce it.”

The Permian wells have since the end of 2016 produced more natural gas and natural gas liquids (NGL) than expected, otherwise known as a higher gas-to-oil ratio, or GOR, from 770 horizontal proved, developed producing, or PDP.

“However, because horizontal wells contact more surface area and drawdown pressures faster, the GORs on these wells are increasing somewhat faster than the increase experienced on vertical wells.”

Using its most advanced drilling design, Version 3.0, Pioneer said the drilling program in the Spraberry/Wolfcamp is expected to deliver an internal rate of return of 40-75%, assuming an oil price of $50/bbl and a natural gas price of $3.00/Mcf.

Version 3.0 well designs use with proppant concentrations of up to 1,700 pounds/foot, fluid concentrations of up to 50 barrels/foot, tighter cluster spacing down to 15 feet and shorter stage spacing down to 100 feet. Forty-eight Version 3.0 wells were placed online in the Spraberry/Wolfcamp during 2Q2017, along with nine wells using even higher intensity completions, Version 3.0+. Plans are to test at least six more 3.0+ wells through the rest of the year.

During the third quarter, 55-60 wells are expected to be placed on production. “The company assumes that it will continue to reject ethane throughout 2017, based on continuing weak market conditions.”

Pioneer also said it exported around 1 million bbl of Permian oil to Europe during the quarter and expects to export another 1 million bbl to Europe and Asia during 3Q2017. Currently Pioneer is delivering 60,000 b/d from the Spraberry/Wolfcamp to Texas Gulf Coast terminals in Houston, Corpus Christi and Nederland.

The company said it is finalizing agreements with several midstream companies to expand current oil transport commitments to meet its expected Spraberry/Wolfcamp volume growth. It also has a longer-term target to move 70-80% of forecasted net oil production under firm pipeline contracts to the Gulf Coast to increase access to international markets and the U.S. refinery market.

Besides the Permian, Pioneer also is working the Eagle Ford Shale in South Texas, where it has begun a limited drilling/completion program in Karnes, DeWitt and Live Oak counties. The 2017 program includes completing nine wells initially drilled in late 2015/early 2016 and drilling and completing 11 wells.

Following the results, energy analysts expressed some concern about the second consecutive quarter for an oil production miss, but the company’s decision to reduce spending and production expectations for the year are positives.

The “GOR issues” overshadowed results and clouded the outlook, according to Wells Fargo Securities LLC.

“While the gas mix increases on all wells as they age, the GOR for the 770 horizontal PDP wells Pioneer has on production is increasing faster relative to the profile exhibited by historical vertical wells in the basin, and what was incorporated in PXD projections.”

The gas volumes “appear to be greater than prior expectations,” with drilling delays driving “both near- and longer-term uncertainty.”

Tudor, Pickering, Holt & Co. (TPH) said the market initially is likely to focus on the GOR in the Midland sub-basin of the Permian, putting Pioneer in the “penalty box” short-term. Volumes were helped by higher gas and NGL production, but investors are “keenly focused on oil growth near-term,” analysts said.

A higher GOR “is a fundamental change we see across almost every unconventional reservoir in the U.S.,” TPH analysts said. “As wells mature, gas ratios increase as a percentage of the hydrocarbon mix. Pioneer showed both horizontal and vertical data supporting a view that the GOR, which starts close to 1,000 Mcf/bbl on an initial rate stabilizes closer to 4,000 Mcf/bbl over the life of the well.”