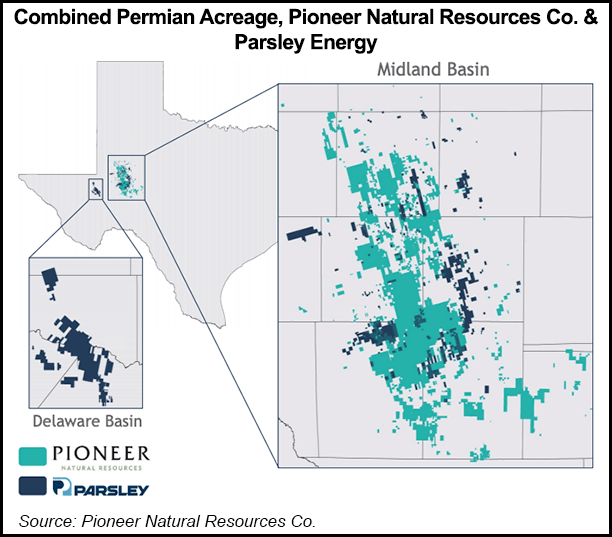 The combined company would hold substantial sway in the Permian, with an estimated 930,000 net acres and with no federal leases. At the end of June, the combined production base was 558,000 boe/d, including 328,000 b/d of oil. Based on proved reserves at the end of 2019, the transaction would increase Pioneer’s proved reserves by an estimated 65%.

Pioneer CFO Richard Dealy during a conference call late Tuesday said the Sheffields were intentionally not included in takeover talks. The merger proposal instead was led by the lead independent directors of each company.

“Given the related party nature of it, this was a transaction that was managed independently, so Scott and Bryan were not involved,” Dealy said. “We very much made sure we had a robust process of them not being involved in the negotiations.”

Bryan Sheffield, who retired from Parsley as CEO last year, reportedly is to have no formal responsibilities when the companies are combined. However, he would be one of its largest shareholders, Scott Sheffield said Wednesday during an interview with Bloomberg TV.

In discussing the deal, the Pioneer chief noted that Parsley held a substantial portfolio in the Permian’s twin Midland and Delaware sub-basins. When combined with Pioneer, the portfolio should “transform the investing landscape by creating a company of unique scale and quality that results in tangible and durable value for investors.”

“Further, Pioneer’s emphasis on environmental stewardship aligns with Parsley’s culture of sustainable operations. The addition of Parsley’s high quality assets enhances Pioneer’s investment framework by improving our free cash flow profile and strengthening our ability to return capital to shareholders. We look forward to integrating Parsley into Pioneer and continuing our history of strong execution.”

Under the terms of the agreement, Parsley shareholders would trade each of their shares for 0.1252 shares of Pioneer common stock, in a trade valued at $4.5 billion. Pioneer also is assuming Parsley’s debt, putting the total value of the transaction at around $7.6 billion.

The combination, said Parsley CEO Matt Gallagher, would create “an organization set to thrive as we forge a strong new link at the low end of the global cost curve. With neighboring acreage positions located entirely in the low-cost, high-margin Permian Basin, the industrial logic of this transaction is sound.

“Furthermore, the Pioneer team shares our belief that a clear returns-focused mindset is the best tool to compete for capital within the broader market. Sustainable free cash flow and growing return of capital are now investment prerequisites for the energy sector and this combination strengthens those paths for our shareholders.”

“The inevitable consolidation in the Permian marches on, and I couldn’t think of a better combination of assets than Pioneer and Parsley,” said Quantum Energy Partners CEO S. Wil VanLoh Jr., whose private equity (PE) firm is Parsley’s largest shareholder. “This combination will provide Parsley shareholders new structural advantages” that include a lower cost of capital, a stronger balance sheet, economies of scale and enhanced environmental, societal and governance (ESG) capabilities.

Parsley last year acquired Permian pure-play, Jagged Peak Energy Inc., and it has worked since to reduce natural gas flaring from its operations. Both Gallagher and Scott Sheffield have been outspoken advocates to improve ESG capabilities, including reducing gas flaring in the Permian, to improve shareholder value.

The enhanced cash flow generation of the combined company is expected to strengthen Pioneer’s investment framework, lowering the reinvestment rate to 65-75% at strip pricing. Operational savings would be driven by using shared facilities, overlapping operations, scale efficiencies and benefits provided by Pioneer’s water infrastructure in the Permian.

Further synergies would be realized “from adjacent acreage footprints and the ability to drill extended laterals where lease configurations of the separate companies prevented long-lateral horizontal wells,” Pioneer management said.

“The combined company will continue to aggressively pursue improvements and promote a culture that prioritizes sustainable operations.”

The transaction, set to be completed early next year, has been unanimously approved by each board. Quantum, which owns 17% of Parsley’s outstanding shares, has executed a voting and support agreement in connection with the transaction.

Once completed, Pioneer’s board would be expanded to 13 to include Gallagher and Parsley’s lead director A.R. Alameddine. The executive management team would lead the combined company with the headquarters remaining in Dallas.

Earlier this month, Pioneer announced it was shuffling its executive team effective Jan. 1 and laying off about 300 people combined as part of a makeover in light of the tighter oil and gas market. The independent in August increased its 2020 oil production guidance by 2.5% to average 203,000-213,000 b/d, even with shut-ins earlier this year. At the time, the company said it would keep about 6,000 b/d shut-in for the foreseeable future because of low oil prices.

Energy analysts with Tudor, Pickering, Holt & Co. (TPH) said the offer was a premium to Monday’s close, but “a slight disappointment to Parsley long-only shareholders who, after speaking with them, were looking for something more analogous to the ConocoPhillips-Concho transaction given the quality of asset base, manageable leverage and higher near-term free cash flow (FCF) to equity/enterprise value metrics.

“At first blush, we think Pioneer is getting a solid deal as added leverage more than offset by Parsley’s higher free cash flow given the low premium paid, but we are still working through a pro forma model for 2021/2022 FCF expectations versus guidance,” analysts said. The  combined organization “will be in a stronger position to garner capital relative to peers given the strength of the balance sheet and quality of long-term inventory, although we continue to believe a focus on less growth capital expenditures and pulling forward the variable dividend may be better received by investors who are still in the market.”
Analysts with Raymond James & Associates Inc. led by John Freeman noted that Pioneer management is considering whether to maintain Parsley’s maintenance capital plan or increase it to 5% growth, in line with Pioneer.

Once the deal is completed, refinancing the PE debt is to be a “high priority and long-term debt reduction/variable dividend will be the primary targets for FCF,” Freeman said.

While the upstream space “continues its significant consolidation of quality names over the last three months…equities have been trending sideways,” the TPH analyst team said. “Client conversations have picked up over the past few weeks and, while consolidation is leading to a more constructive dialogue over the medium term, investors seem to be patiently waiting for an improvement in the macro environment before putting capital to work.”

A merger and acquisition wave is “likely to continue over the next 12 months and may accelerate as crude prices recover.”