Physical natural gas for Friday delivery took a strong cue from early weather-driven strength of the futures contract and posted healthy, double-digit gains at most points. 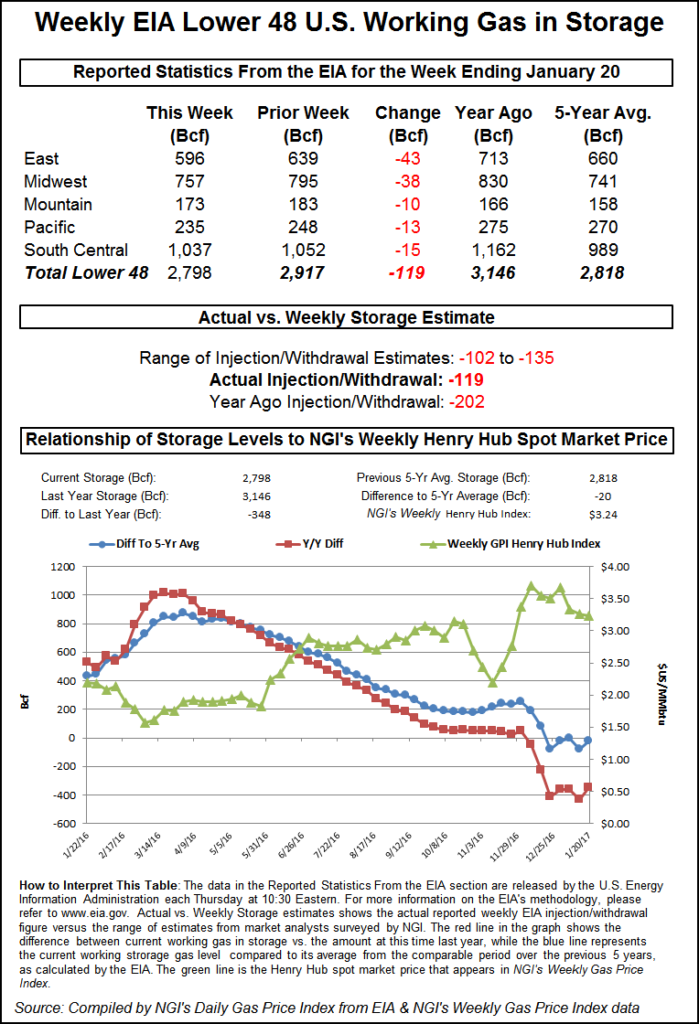 Producing zones and Midwest market points were up about 15 to 20 cents, and only two locations followed by NGI sustained losses. The NGI National Spot Gas Average rose 14 cents to $3.34.

The Energy Information Administration (EIA) reported a storage withdrawal of 119 Bcf for the week ending Jan. 20, a couple of Bcf greater than expectations, and natural gas futures soared.

“We’ve had pretty mild temperatures here last week so someone took the report as bullish,” said a New York floor trader. “We were looking at $3.44 to $3.45 just before the number came out.”

“The 119 Bcf net withdrawal for last week was nearly in line with the consensus expectation and so neutral on that score,” said Tim Evans of Citi Futures Perspective. “At the same time, however, this was a big step down from the 243 Bcf drop in the prior week and below the 176 Bcf five-year average, and so bearish on a seasonally adjusted basis. Storage remains at a relatively comfortable level, 20 Bcf (0.7%) below the five-year average as we approach the midpoint of the winter on Groundhog Day, Feb. 2.”

“We believe the storage report will be viewed as neutral,” said Randy Ollenberger, an analyst with BMO Capital Markets. “Storage has dropped to five-year average levels, and we believe that U.S. working gas in storage could trend toward five-year lows by the end of the 2017 winter withdrawal season, assuming normal weather.”

Inventories now stand at 2,798 Bcf and are 348 Bcf less than last year and 20 Bcf less than the five-year average. In the East Region, 43 Bcf was withdrawn and the Midwest Region saw inventories decrease by 38 Bcf. Stocks in the Mountain Region fell 10 Bcf, and the Pacific Region was down 13 Bcf. The South Central Region dropped 15 Bcf.

Although near-term temperatures are expected to be at or in some cases above seasonal norms, “A return of cold air into the northeastern United States will trigger a significant lake-effect snow event over the next several days,” said meteorologists at AccuWeather.com. Gas at the Algonquin Citygate rose 41 cents to $3.97, and deliveries to Iroquois, Waddington gained 15 cents to $3.66. Parcels on Tennessee Zone 6 200 L jumped 51 cents to $4.10.

According to AccuWeather.com meteorologists “A storm moving through the Northeast prior to the end of the week will help drag cold air southward from Canada in its wake. Rain showers will transition to snow showers over parts of the Appalachians and the Ohio Valley into Thursday night, [and] the colder air will spill in on a brisk northwesterly wind.”

“As long as winds persist from the west or northwest, so will the lake-effect snow machine; in this case it looks to be through the end of the weekend. A narrow but high-intensity lake-effect snow band can develop and dump feet of snow in locations where it persists for hours, or even days, on end,” said meteorologist Kyle Elliott.

The affected areas include parts of southeastern Ontario, Michigan, northwestern Pennsylvania and western New York. “From Thursday through Monday, some residents downwind of Lake Ontario may be measuring snowfall in yards instead of feet,” Elliott said.

Futures traders keyed in on overnight longer-term weather model runs, which resulted in a complex series of changes favoring cooler temperatures in the East. “A mix of detailed changes were made to the forecast in this [six- to 10-day] period, with Texas being warmer late while the East Coast is colder in the mid-period,” said forecaster MDA Weather Services in its Thursday morning report to clients. “Pattern wise, this period features a buildup in ridging over Alaska, but that feature’s colder influence is tamed by an eastern Pacific low tracking inland around mid-period.

“This feature will allow for a coverage of above normal temperatures in the Central U.S., but a round of high pressure from mid to late period in the East has temperatures averaging the period near and marginally below seasonal norms there. Confidence remains moderate overall.”