Physical traders Thursday must have had a sense of clairvoyance as gas price declines for Friday delivery matched the falling futures strip. 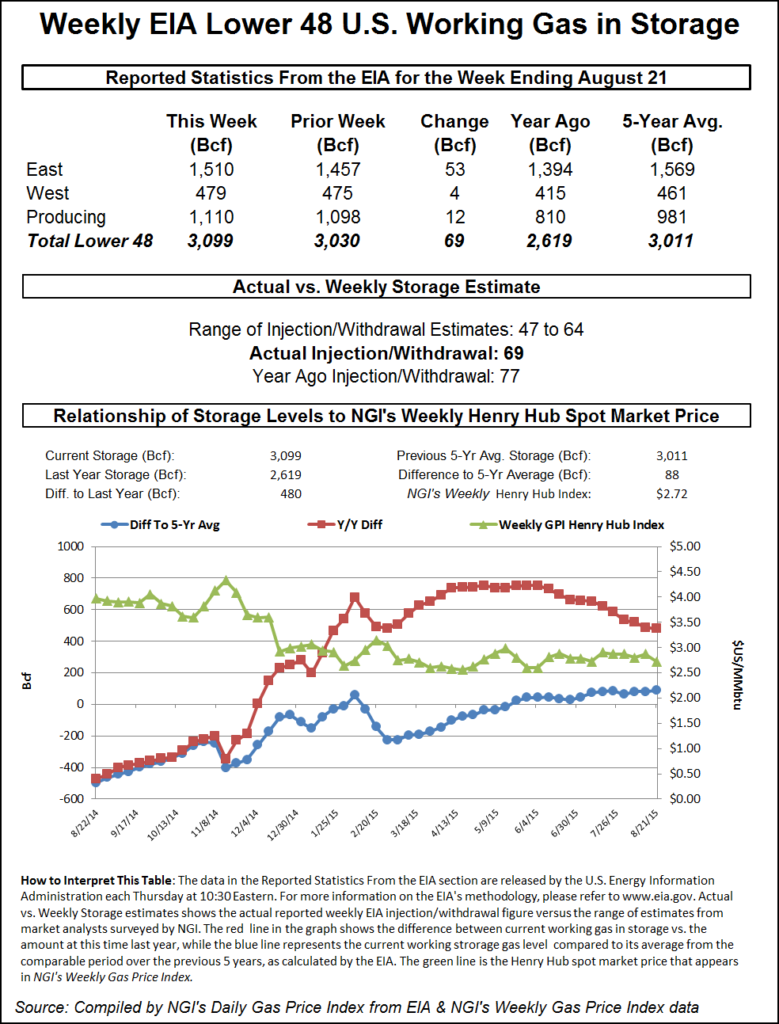 In its 2 p.m. EDT Thursday report, the National Hurricane Center (NHC) said a weakening Erika was 160 miles west of Guadeloupe and winds had fallen to 45 mph. It was heading west at 16 mph and was projected to move northwest toward Florida and the Georgia-South Carolina coast.

Should Erika make landfall in Florida, it could have a major impact on power demand and spot gas prices in the area. A landfall would entail heavy load-killing rain as well as wind. Industry consultant Genscape believes Erika holds “special intrigue since Florida has not had a full-blown hurricane since Hurricane Wilma in 2005. Moreover, Florida is the largest demand market in SEMA [Southeast Mid-Atlantic] with 14-day average demand figures for the state sitting at 4,149 MMcf/d. If Erika makes landfall, demand could see potential disruption with ramifications for FGT Citygate prices as well.”

A central Florida utility buyer said they weren’t expecting much of a market impact from Erika. “We are pretty centrally based and haven’t done much at all. Indications are that it may be just a Category 1 storm.”

The more northeasterly projected path of Erika had the buyer thinking a decrease in power requirements. “I think it will bring less load because if it skirts Florida, it will bring rain. Prices will fall if we get a lot of rain. FGT has dropped an overage alert, so I am thinking they are expecting a lot of rain,” he said.

Thursday’s 10:30 a.m. release of storage data by the Energy Information Administration gave traders an opportunity to hone their estimates of winter supply. Earlier estimates of bin-busting storage over 4 Tcf have now been moderated closer to 3.9 Tcf, but injections going forward look to be robust. Estimates for the week ended Aug. 21, however, looked to be no greater than the five-year average.

Last year, 77 Bcf was injected, and the five-year average stands at 61 Bcf. Analysts at IAF Advisors calculated a 61 Bcf injection, as did the folks at ICAP Energy. A Reuters poll of 20 market observers revealed an average 59 Bcf with a range of 47 to 64 Bcf.

They all missed. For the week ended Aug. 21 EIA reported an injection of 69 Bcf and the expiring September futures contract fell to a low of $2.630 after the number was released. By 10:45 a.m. September was trading at $2.678, down 1.5 cents from Wednesday’s settlement.

Early price action after the number came out had traders scratching their heads. “I don’t get it why it would rally back after a bearish number,” said a New York floor trader. “The high side of expectations was 64 Bcf, With 69 Bcf, what is going on here? Perhaps people were looking to get in this market at lower levels and saw the low $2.60s as an opportunity.”

Analysts see an inconsistency in reports that makes an accurate assessment difficult. Tim Evans of Citi Futures Perspective called the report “a clear bearish surprise. In terms of the larger pattern here, we note there has been considerable volatility in recent reports, with some alternation between bullish and bearish surprises that makes it difficult to forecast and difficult to assess the background supply/demand balance.”

Inventories now stand at 3,099 Bcf and are 480 Bcf greater than last year and 88 Bcf more than the five-year average. In the East Region 53 Bcf was injected and the West Region saw inventories increase by 4 Bcf. Stocks in the Producing Region rose by 12 Bcf.

Market technicians see futures within a range, with neither the bulls nor bears at present enjoying the upper hand. “2013 or 2014? Which path will natural gas follow into the end of 2015?” said Brian LaRose, market analyst at United ICAP in closing comments Wednesday. “While history favors the bulls, it is quite clear that history (i.e., 2014) does not always repeat. To signal a seasonal advance has the potential to unfold this year, bulls first need to clear $2.939. To derail the possibility of a seasonal advance into the end of 2015, bears need to crack $2.385. Between $2.385 and $2.939 is neutral territory.”

Overnight prices held steady as weather forecasts moderated. WSI Corp. in its six- to 10-day outlook said temperatures were “not as warm as previous forecasts across the southern half of the nation and along the West Coast. The northern Rockies and north-central U.S. is warmer. PWCDDs are down 1.7 to 53.3 for the CONUS.

“The forecast has room to waiver a bit in either direction due in part to Erika. The Southeast has the a small downside risk, as does the Northwest. Otherwise, the Plains and Midwest have a risk to the hotter side.