Losses ruled for both physical and financial natural gas markets, with the NGI Weekly National Spot Gas Average falling 22 cents to $4.01 for the week ended July 11. All actively traded points posted losses, with the norm being a decline from 10 cents to a touch above 20 cents. 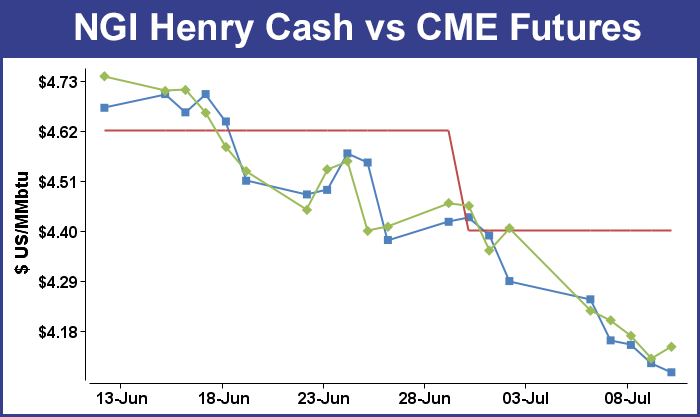 August natural gas tumbled 26.0 cents on the week to $4.146. The lows of Thursday and Friday, just below $4.11, represent the lowest spot futures have traded since mid January.

The Energy Information Administration (EIA) Thursday morning reported an increase in working gas inventories of 93 Bcf, about 3 Bcf more than what the market had been expecting.

Going into Thursday’s trading, industry pundits were calling for an inventory build in the neighborhood of 90 Bcf, as summer’s power generation gas demand had finally caught up with gas injections. Even that was still well ahead of historical averages. Last year, 80 Bcf was injected and the five-year average increase stood at 72 Bcf. An injection of 90 Bcf would indicate an incremental surplus of about 1 Bcf/d, according to studies.

Analysts at Tudor, Pickering, Holt & Co. saw the expected injection of 90 Bcf “closer to norms than we have seen recently on an absolute basis, but on hotter than normal weather, so implied oversupply continues. Cooling degree days for the week of 77; +7 CDDs vs week’s historic norms and +14 vs previous week.

With the Fourth of July falling the day after reporting period, “this week’s calcs are more challenging than normal but sequential math suggests about 80 Bcf on a week/week uptick in air conditioning-driven electric demand…a higher 90 Bcf print would suggest another 1 Bcf/d of incremental oversupply.”

IAF Advisors was looking for an increase of 90 Bcf, as was Stephen Smith Energy Associates. A Reuters poll of 22 industry traders and analysts revealed a sample mean of 92 Bcf with a range of 88-101 Bcf.

Bentek Energy’s flow model forecast a build of 88 Bcf, the first sub-100 Bcf build since early May. Bentek said it “has taken a small holiday effect into account with this forecast, although the holiday weekend will most likely impact next week’s number to a greater degree. Total demand in the U.S. showed little effect from any holiday weekend impact, with an uptick of 2.3 Bcf/d in power burn demand from the previous week as total population weighted cooling degree days rose from 67 to 81 week-over-week.”

The soft market response following EIA’s release prompted a New York floor trader to say that it seemed as though “the market has broken down considerably and the market has fallen well below the $4.25 support area. We could see $3.75, and this market has no rallying power.”

Others saw continued downward pressure on prices as well. “The 93 Bcf net injection was slightly more than expected and more than the 72 Bcf five-year average. It was the 12th consecutive weekly injection larger than the five-year average. The build may not do too much more than reinforce the established bearish trend, but it does maintain downward pressure on prices,” said Tim Evans of Citi Futures Perspective.

Inventories now stand at 2,022 Bcf and are 653 Bcf less than last year and 769 Bcf below the 5-year average. In the East Region 56 Bcf were injected and the West Region saw inventories up by 14 Bcf. Inventories in the Producing Region rose by 23 Bcf.

Looking out to the end of the injection season consensus estimates calling for ending storage in the vicinity of 3.5 Tcf are off base, according to Phillip Golden, director of risk and product management at Houston-based Energy Markets Exchange. “This is the latest we have crossed the 2 Tcf barrier, The EIA came out with a report in March projecting a 3.5 Tcf ending inventory, but we need to average 83 Bcf for the rest of storage season, and if you look at injections historically that’s way above the norm,” he told NGI.

Futures trading has given no hint of stabilization let alone a market turnaround. “I’m a bear. It’s hard not to be,” said Elaine Levin Friday, president at Powertrade LLC, a Washington, DC-based trading and risk management firm.

“Summer is over, and that is what the natural gas markets seem to be believing. Forecasters are warning of a Polar Vortex in July. While technically not a Polar Vortex but unseasonably chilly air is headed for the Northeast and North Central parts of the country. There is not a lot on these weather patterns [for bulls] to get excited about.

“I believe we will test $4 and get down to $3.80,” she said. Also sell offs in the liquids markets and any repercussions from European banking troubles have “had a habit of raising the dollar, and lowering commodity prices. Nothing in Thursday’s or Friday’s action makes me believe the market has found a bottom,” she said.

As weak as the market looks, other analysts also caution against trying to pick a market bottom. “[Thursday’s] downside price response of around 5 cents to a slightly bearish storage figure appeared appropriate, and we see [Thursday’s] fresh lows as setting the stage for additional price slippage to the $4.05 level by Monday at the latest,” said Jim Ritterbusch of Ritterbusch and Associates in comments to clients.

“[The] 93 Bcf injection narrowed the deficit against five-year averages by an additional 21 Bcf, a shortfall now approximating 27%. But the more important pricing element is the likelihood that the supply deficit will see further erasure in big chunks as a result of a substantial upcoming reduction in CDDs. Updates to the short-term temperature views are still favoring unusually cool trends, especially across most of next week when deviations from normal could be ranging from 10 to 15 degrees through much of the upper Midcontinent.

“Although a strong pace of production and possible utility switching back away from coal may be offering some counters to a bearish view, we don’t expect a sustainable price advance until the weather forecasts normalize or indicate a shift toward some warmer trends. Furthermore, we still anticipate an unusually soft physical trading environment next week, with Henry Hub possibly establishing a brief $3 handle. As a result, we still see contango developing in the front spread. All factors considered, we feel that this market may be approaching a longer-term price bottom and as a result, risk-reward ratios are unfavorable for new short positions. But at the same time, we will caution against attempts to pick a bottom for now.”

In Friday’s trading purchases for weekend and Monday volumes seemed to have little appeal as temperatures were forecast to move little from seasonal norms,

Quotes throughout the country moved lower, mostly within a range of a nickel to a dime, but Marcellus locations saw prices fall more steeply. Futures traders characterized the day’s nominal gain as a “dead cat bounce” and saw nothing on the trading landscape to indicate a market bottom is even close. At the close, August had added 2.6 cents to $4.146 and September had risen 2.3 cents to $4.136.

Weekend and Monday quotes across the Marcellus and Ohio Valley dropped by double digits as weather forecasts called for weekend temperatures to remain stuck in neutral. The National Weather Service in Indianapolis said, “A warm front will move into the area late tonight [Friday] into Saturday allowing warm and humid air to overspread the area as well as creating chances for rain. Cold fronts will move into the area Sunday and Monday, bringing additional chances for rain. Behind the cold fronts will come well below average temperatures along with low chances for precipitation across parts of the area next week.”

Two-dollar gas at Marcellus points may not be around much longer as production is now making it west on Rockies Express Pipeline (REX). Industry consultant Genscape said, “Markwest started delivering gas onto REX on June 26, and two weeks later, the interconnect is already flowing at capacity. The capacity for the Seneca lateral will increase incrementally in the next year [and] receipts on REX from the Seneca Processing Plant was 248 MMcf/d for yesterday and today [Friday]. The increase in gas receipts turned the segment flow from the Indiana/Ohio border from west-to-east to east-to-west since July 4th,” the firm said in a report.

Genscape remarked that the effect on Chicago basis was indeterminate for now, but “the effect on supply on REX from the Rockies is clear. Receipts from White River Hub have decreased 0.26 Bcf/d month over month, which is instead delivering the displaced gas primarily to TransColorado. More Rockies gas will likely be displaced from the Chicago market by Marcellus production.”

Quotes at New England points were mixed. Weekend and Monday deliveries to the Algonquin Citygates shed 16 cents to $2.59, and deliveries to Iroquois Waddington fell 8 cents to $3.99. On Tennessee Zone 6 200 L, packages were seen at $2.82, up 4 cents.

Rockies points were also weaker. Weekend and Monday packages on CIG fell 6 cents to $3.94, and gas at the Cheyenne Hub lost 7 cents to $4.01. At the Opal Plant tailgate gas was quoted at $4.05, down 5 cents, and on Northwest Pipeline WY prices came in 3 cents lower at $4.04. Deliveries on Transwestern San Juan fell 9 cents to $4.07.

In its Friday morning six-to 10-day outlook, WSI Corp. shows a large ridge of below-normal temperatures extending from New England to New Mexico and North Dakota to North Carolina. “[Friday’s] six-10 day period forecast has trended warmer over the Rockies and cooler over the Northwest when compared to yesterday’s forecast, [and] forecast confidence is considered just average standards due to fair large-scale agreement but models diverge late in the period, highlighting increased uncertainty.

“The latest European operational model forecast highlights another impressive anomalously cool air shot across the Rockies and Plains late in the six-10 day period forecast. This poses some downside risks to today’s forecast over the central U.S. late.”