Physical gas for Friday delivery fell hard and fell often as prices averaged a decline of 19 cents nationally in Thursday’s trading. No actively traded point registered gains and most points tumbled anywhere from a dime to 20 cents. 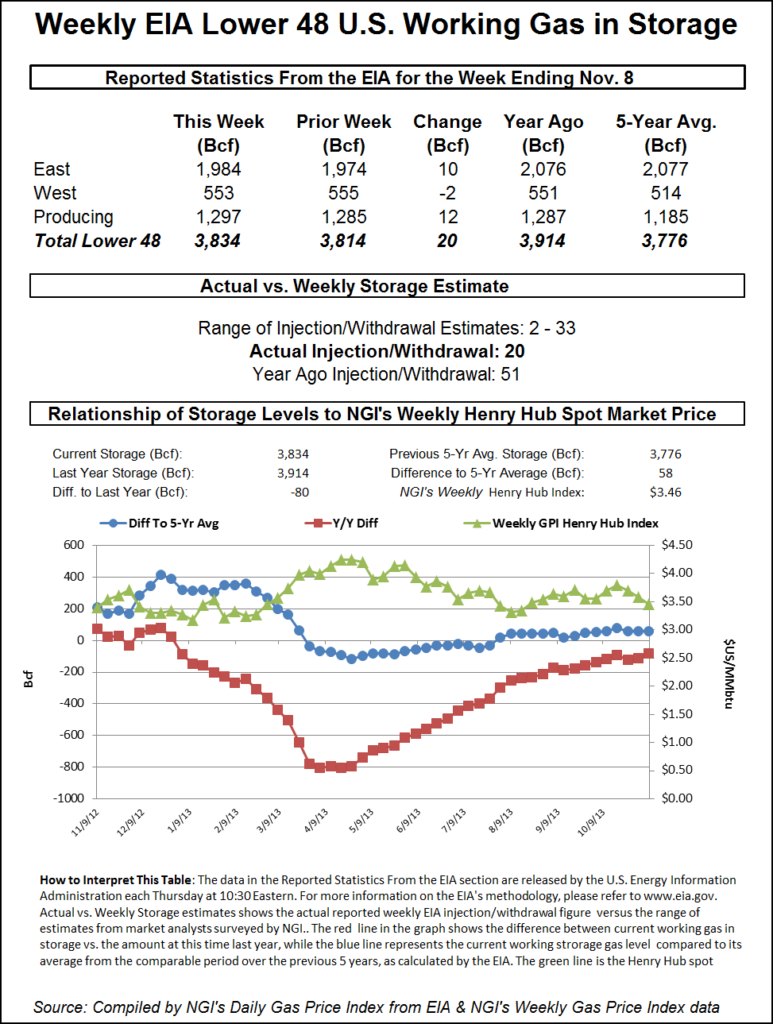 Northeast points were hit the hardest, dropping as much as 75 cents but market points on both the East and West Coasts skidded as a combination of moderating temperatures and falling power prices removed the primary market drivers supporting prompt gas prices.

The Energy Information Administration (EIA) reported an inventory build of 20 Bcf — what the market expected — and prices managed to close higher on the day. At the close December had risen 3.9 cents to $3.605 and January was up by 3.7 cents to $3.655. December crude oil fell 12 cents to $93.76/bbl.

“High temperatures were seasonable for this time of year around San Francisco, with temperatures in the mid- to upper 60s. Most days will bring at least partial sunshine through the weekend with warm, dry air. It will turn slightly cooler for the weekend as several dips in the jet stream will bring cool air to the region.”

Next-day power prices responded accordingly. IntercontinentalExchange reported healthy declines for next-day power in California as well as neighboring market points. Friday and Saturday deliveries of peak power to NP-15 fell $3.69 to $40.00/MWh and peak power at SP-15 fell $4.81 to $41.22/MWh. At Mid-C Friday-Saturday peak power dropped $5.55 to $28.68/MWh and at COB power was seen at $32.84/MWh, down $4.70.

Northeast points also took their fair share of punishment as milder weather and a soft power environment worked to pummel next-day gas prices. The National Weather Service in southeast Massachusetts said “high pressure will build across the Middle Atlantic States [Thursday] then push south of New England into the weekend. This will allow milder temperatures to move into the region. Some much needed rain is expected late Sunday night and Monday. A return to much colder weather is expected by the middle of next week.”

Market centers between the East and West Coasts were also hit with concerted selling. Gas at the Chicago Citygates was quoted 16 cents lower at $3.56 and at the Henry Hub Friday parcels were seen at $3.52, down 16 cents. Gas on Panhandle Eastern fell 16 cents to $3.22 and at Opal next-day deliveries skidded 19 cents to $3.36.

Earlier forecasts of cooler weather moderated overnight. In its six- to 10-day outlook Commodity Weather Group Thursday showed an incursion of warmer than normal temperatures into California and the Mountain West and cooler than normal temperatures migrating to a line south and east extending from Illinois to South Texas. “Overnight the GFS [Global Forecast System] model began moving toward the trends first seen in the European model solutions yesterday: A weaker, more progressive cool push for next week,” said Matt Rogers, president of the firm.

“We were conservative with the changes, but did speed up the cold front (which removed some pre-frontal warmth) as well as the subsequent moderation. With the shifting models, confidence on the period is lower today. Looking farther out in the forecast, changes were much more limited in the 11-15 day. We are still expecting the period to be variable, but cold leaning across much of the East and South, while warmth remains in the West more often than not. Looking up to the high-latitudes, there are still signs of blocking features forming, but the ensembles are showing increased spread, which keeps caution in the forecast.”

Natural gas futures rallied and then retreated after the EIA reported Thursday morning a build in natural gas inventories about the level the market was expecting, an increase of 20 Bcf.

December futures were down on the day on weather developments before the report’s release. Once the report was unveiled, December futures rallied to the high of the day, making it to unchanged at $3.566 before settling back. By 10:45 EST, December was at $3.535, down 3.1 cents from Wednesday’s settlement.

Traders’ expectations were almost identical to the reported build ahead of the report. Analysts at IAF Advisors forecast an increase of 19 Bcf, and a Reuters poll of 23 traders and analysts showed an average 21 Bcf build. Industry consultant Bentek Energy was spot on with a prediction of 20 Bcf.

More injections may be on tap. “We are going to get mild again in the East. We’ll be in the mid-60s by Monday,” said a New York floor trader. “The bottom line is there is a big number in the ground no matter what year you are looking at. There is plenty of gas.”

Inventories now stand at 3,834 Bcf and are 80 Bcf less than last year’s record-setting build and 58 Bcf above the five-year average.

In the East Region, 10 Bcf was injected and in the West Region 2 Bcf was withdrawn. Inventories in the Producing Region increased by 12 Bcf.

The Producing region salt cavern storage figure rose by 7 Bcf from the previous week to 332 Bcf, while the non-salt cavern figure rose by 5 Bcf to 965 Bcf. The EIA first split Producing Region facility types in storage report footnotes in March 2012 in an effort to give analysts and industry more comprehensive information on the relationship between natural gas inventory changes and types of storage facilities (see Daily GPI, March 26, 2012).

Kinder Morgan Inc. (KMI) continued to improve its balance sheet in the final three months of 2020, but the company is toeing the line when it comes to spending this year, focusing on projects supporting the rampant growth in exports. Speaking during a conference call Wednesday, CEO Steven Kean said 2020 “has shown us how…