Packages of physical natural gas for the extended holiday period fell hard and fell often in Thursday’s trading. Not one market point traded in positive territory as weekend temperature forecasts turned mild and buyers saw no need to extend themselves by making purchases of gas they may have to turn back on Monday. 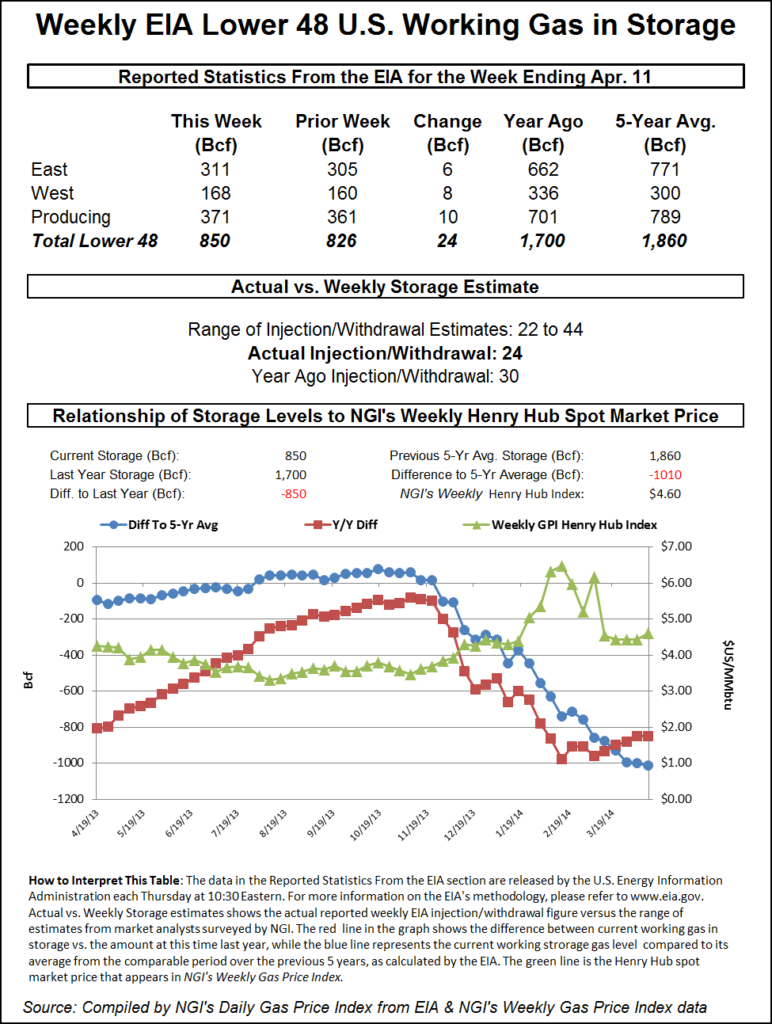 The average overall decline was about a quarter with the greatest declines seen at Northeast and eastern points, and California and the Rockies were hit with stout double-digit declines as well. The Energy Information Administration (EIA) reported a storage build of 24 Bcf, well short of market expectations, and as soon as the number hit trading screens it was off to the races for the bulls. At the close May had advanced 21.1 cents to $4.741 and June was higher by 20.5 cents to $4.754. May crude oil gained 54 cents to $104.30/bbl.

Weather developments in California were similar to those elsewhere with mild, seasonal conditions expected to dominate the weather landscape. AccuWeather.com forecast that San Francisco’s Thursday high of 65 would ease to 63 on Friday and 62 on Sunday. The seasonal high in San Francisco is 65. Los Angeles’ Thursday max of 71 was expected to dip to 70 on Friday and hold for Saturday. The normal high in the City of Angels this time of year is 73. San Diego’s Thursday high of 66 was anticipated to ease to 65 Friday but rise to 67 on Saturday. The seasonal high in San Diego is 68.

Mild conditions were seen for northern California. AccuWeather.com meteorologists said, “For the remainder of the week and into the weekend, morning clouds will give way to mostly sunny skies. There may be low morning clouds to cause flight delays at San Francisco International Airport, but the clouds won’t stay long. “Areas of low clouds to start off Thursday will break for some sun in the afternoon with highs in the lower 60s,” said AccuWeather.com meteorologist Carl Erickson.

Warm temperatures were expected for Los Angeles, but power loads were seen declining. “With temperatures hovering at around average highs late this week, a warmup is in store for Los Angeles that will remain into the weekend and early next week [and] Onshore flow will weaken heading into Thursday,” said Erickson. “As a result, while there will still be areas of low clouds to start the day, they should quickly give way to sunshine, [and] afternoon temperatures will climb into the lower 70s, the average for this time of year.

“Onshore flow returns Friday with morning low clouds giving way to some sun,” he said, [and] with the increased onshore flow and more in the way of low clouds temperatures will be cooler with highs in the upper 60s.

“A warmup will begin heading into the weekend. Both Saturday and Sunday will have low clouds to start the day followed by afternoon sunshine. Highs will stay in the lower 70s Saturday and climb to the upper 70s Sunday. The warming trend will continue into Monday with highs nearing the 80 degree mark.”

The California Independent System Operator forecast that peak power loads Thursday of 29,096 MW would give way to 27,093 MW Friday.

In the Mid-Atlantic gas for the extended weekend fell almost a dollar. Gas bound for New York City on Transco Zone 6 dropped 92 cents to $3.61, and gas into Tetco M-3 Delivery was seen 82 cents lower at $3.70.

The day’s futures price driver was the 10:30 a.m. EDT Energy Information Administration (EIA) storage report. Traders were expecting a build generally in the 40 Bcf area, but analysts admit that forecasting the weekly storage numbers has been a tough row to hoe. Thursday was no exception.

“I had heard a number of around 34 Bcf, and I can tell you that just before the number was released the market jumped from $4.52 to $4.64; as soon as we are looking up and we see the market rallying, boom, the number comes out,” said a New York floor trader soon after the report was released. “The volume in the spot May contract jumped by 40,000 contracts in the last 15 minutes.”

Ritterbusch at 27 Bcf came closer than most. “I look at about 7 to 8 variables, and I just don’t see the production growth I thought we were going to see. I factor in CDDs and other items as well,” he told NGI. He admitted that his forecasting “would be hot for a few weeks and then cold.”

He said that the pace of new production was “slow, and we need to reverse the trend of gas-directed rigs. We are flaring too much gas and we are not getting the associated gas I thought we would see. We will just see elevated pricing for a while.”

Those in the physical side of the business remain concerned over the low pace of injections. A Michigan marketer said storage was “the biggest wild card in our business right now. The longer it gets delayed, the months of August, September and October are going to get bid up, and you will see the pipelines full. You better hope it doesn’t get cold. This storage report has got me on edge. The builds people are talking about are way short of the 100-plus Bcf weekly that is going to be needed. It’s very frustrating.”

Cold, at least near term, doesn’t seem to be an issue. WeatherBELL Analytics in it morning 20-day forecast predicts below-normal heating requirements. In the six- to 10-day period it forecasts national heating degree days (HDD) will reach 42, well below last year’s 56 HDD, and also short of the 30-year average of 44.8. In the 11- to 15-day time frame; however, it is looking for 38.6 HDD, more than last year’s 27.3 HDD and more than the 30-year average of 29.3 HDD.

With futures more or less floundering in a narrow trading range, technical analysts are in something of a quandary. “Until resistance can be exceeded or support can be broken, we will be stuck in a technical no mans land,” said Brian LaRose, analyst at United ICAP. “To have us entertaining a long position, $4.749-4.757-4.794 will need to be exceeded. To have us entertaining a short position $4.324-4.292 will need to be broken. [We] suggest sitting on our hands or using this opportunity to sell front-month strangles or iron condors,” he said in closing comments to clients.