Natural gas prices for Friday delivery fell a nickel on average Thursday as most traders elected to get their deals done ahead of a government storage report that was expected to have bearish overtones. 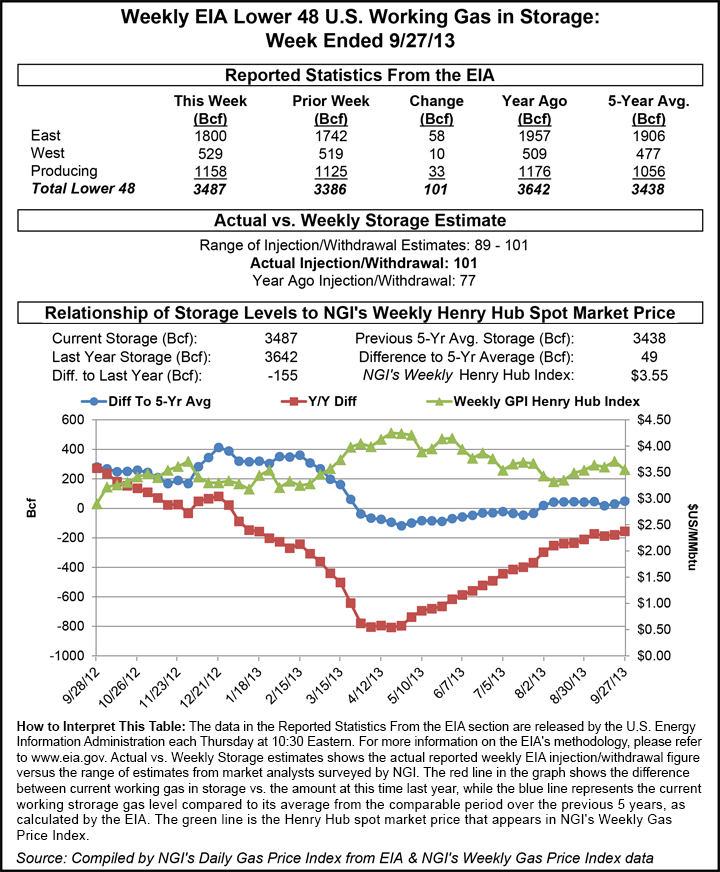 Northeast and East points took double-digit hits, and Gulf Coast locations eased about a nickel. The Energy Information Administration (EIA) reported a build of 101 Bcf, ahead of expectations in the mid-90 Bcf range. Futures fell immediately and at the close November was off 4.3 cents to $3.499 and December had given up 3.8 cents to $3.664. November crude oil shed 79 cents to $103.31/bbl.

Pundits have been saying for months now that hurricanes in the Gulf of Mexico (GOM) currently have a lot less impact on a market bolstered by shale production. That appeared to be the case Thursday as platforms and pipelines shut down, curtailing production, ahead of Tropical Storm Karen, expected soon to be hurricane force, headed into the heart of oil and gas production in the central Gulf (see related story). In other years the production cuts would have pushed prices higher.

Traders, however, appeared to be looking ahead at the potential load-killing cloudiness and moisture that Karen is expected to eventually bring to the Northeast, cutting temperature highs down to size. AccuWeather.com forecast that the Thursday high in Boston of 76 was expected to ease to 75 Friday before sliding further to 72 on Saturday. The normal early October high in Boston is 66.

“Unseasonably warm conditions will continue around New York City through the weekend, ahead of possible drenching rain from Karen,” said AccuWeather.com meteorologist Alex Sosnowski. “High temperatures within a few degrees of 80 and generally rain-free weather will continue around the region through the day Sunday; however, two weather systems have a chance at bringing a dose of heavy rain from late Monday into early Tuesday. A front from the Plains is forecast to sweep off the East Coast Tuesday. Ahead of the front, showers and thunderstorms are in store with a southerly flow of moisture.”

Superimposed on that “may be Karen as a tropical rainstorm. If Karen’s rain does make the trip this far north, it would raise the possibility of minor flash and urban flooding, as well as travel delays, most likely Monday night with perhaps some lingering effects Tuesday morning,” he said.

Northeast and East points felt the brunt of the day’s decline. Quotes for Friday delivery at the Algonquin Citygates tumbled 17 cents to $3.55, and deliveries to Iroquois Waddington shed 17 cents as well to $3.82. Gas on Tennessee Zone 6 200 L dropped 16 cents to $3.53.

By most accounts, storage by the traditional Nov.1 start of the heating season looks to be less than last year’s record 3,930 Bcf but above the average of 3,776 Bcf. With Thursday’s build coming in at a plump 101 Bcf, conditions might be in place for another run at the record. With five weeks left in the injection season, 89 Bcf would have to be injected weekly to reach 3,930 and 58 Bcf to attain an average starting inventory.

Chalk up another miss for the industry experts as storage estimates were bunched within a mid- to upper-90s Bcf range for the week ended Sept. 27. A Reuters poll of 25 traders and analysts revealed an average 94 Bcf estimate with a range of 89-101 Bcf, and Ritterbusch and Associates came close with an estimated 99 Bcf increase. Bentek Energy’s flow model saw a 94 Bcf injection.

At Energy Metro Desk, they weren’t looking for any surprises and the consensus was for a 95 Bcf gain. “We’re thinking this week’s number will be a snoozer — a very big snoozer, mind you, but a snoozer nonetheless. We’ve seen absolutely zero indications that we’ll see anything but a mid- to upper-90s build this week,” said John Sodergreen, editor. “In other words, no surprises. Our consensus came in at 95, and the broader survey range was a very tight 92-100 Bcf. Demand was down, outages were up only slightly and production was, well, we think it was up slightly, but nobody seems all that sure this week.”

MeanwhileTropical Storm Karen was showing winds of upwards of 65 mph and was moving to the north-northwest at 12 mph, according to the National Hurricane Center, which expects to be monitoring Hurricane Karen when it hits the coast Saturday. Hurricane watches and warnings have been posted along the Gulf Coast from Grand Isle, LA to the panhandle of Florida.