Physical gas prices for Friday delivery continued their upward trajectory in Thursday’s trading with a wide range of market responses to a strong screen as well as weather forecasts calling for brutal cold to encompass the entire eastern two-thirds of the country by next week. 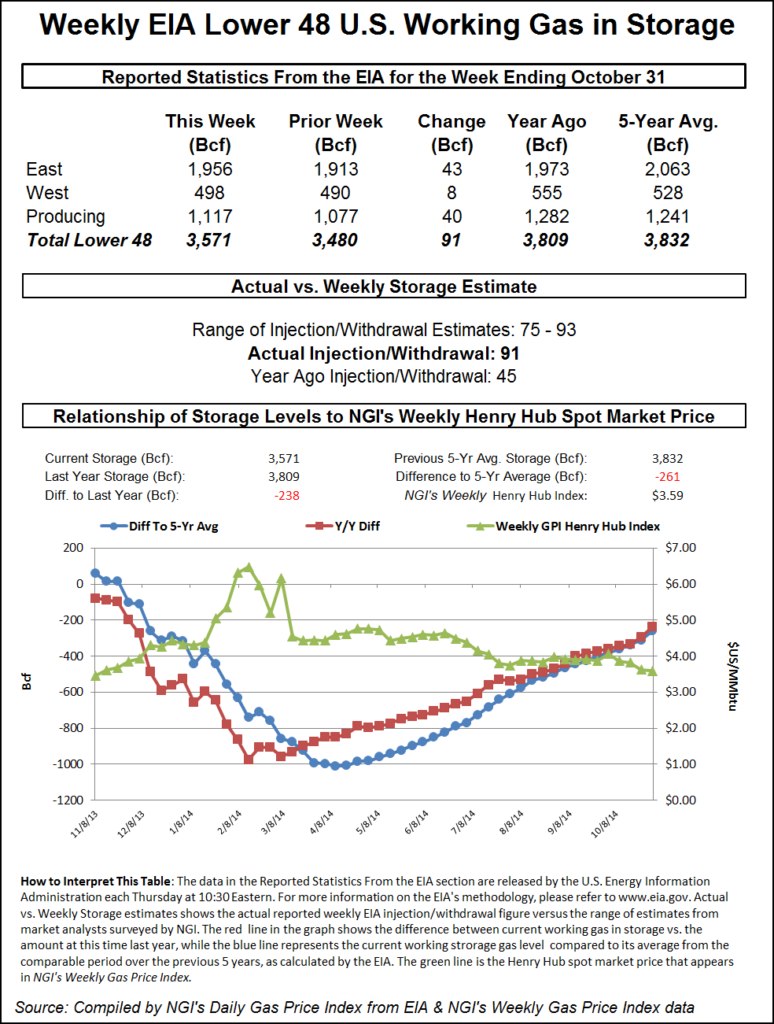 Locations gained anywhere from a nickel to hefty double-digit rises to multi-dollar advances. The overall market gain was 24 cents, almost identical to futures. The Energy Information Administration (EIA) reported an inventory build of 91 Bcf for the week ended Oct. 31, and although it was initially interpreted to be a bearish figure, early futures losses were erased as the market marched higher and focused on near-term weather outlooks. At the close, December had risen 21.0 cents to $4.404 and January was higher by 19.9 cents to $4.486. December crude oil dropped 77 cents to $77.91/bbl.

Gas markets were clearly focused on upcoming brutal cold next week even though near-term temperature outlooks were not too far off seasonal norms. “Despite the chance of a snow shower over the weekend in Chicago, Saturday through the beginning of next week will offer the warmest opportunities to get outside for a while,” said Jillian MacMath of AccuWeather.com.

“A few days of near-normal temperatures are forecast before the colder air arrives. Highs Sunday through Tuesday will waffle between the 40s and 50s, plummeting to below freezing overnight. By Wednesday, highs could be as many as 20 degrees lower than they were only one week prior, as a piece of the polar vortex dips down toward the Central states. The worst of the cold will reach Chicago overnight Tuesday and continue through the middle and latter part of next week, [and] as the cold air is accompanied by gusty winds, [wind chill] temperatures could drop into the teens at times.”

Farther east, temperatures for Friday and into the weekend were not far removed from normal. AccuWeather.com predicted that the high in Boston Thursday of 51 degrees would ease to 50 by Friday and slide to 47 Saturday. The seasonal high in Boston is 54. Cleveland’s Thursday high of 50 was predicted to fall to 44 Friday and climb back to 50 on Saturday. The normal early November high is 55. Chicago, however, was expected to see temperatures as much as 10 degrees below normal. Thursday’s high of 45 was seen easing to 44 Friday and 43 Saturday, 11 degrees below normal for this time of year.

Power loads across the broad PJM footprint were expected to ease. Thursday’s peak load of 33,914 MW was predicted to fall to 33,146 MW Friday and slide to 30,596 MW Saturday.

The National Weather Service in its most recent six- to 10-day outlook shows the entire eastern two-thirds of the country engulfed by below to much below normal temperatures with portions of the Rocky Mountains, Great Basin, California, the Pacific Northwest and Alaska above normal. The current interpretation shows still larger portions of New Mexico, Colorado, Wyoming and Montana included in the below to much below normal temperature regime than Wednesday’s forecast.

Gains in Appalachia and the Marcellus weren’t far behind. Deliveries Friday on Millennium climbed 34 cents to $3.35, and gas on Transco Leidy was quoted 32 cents higher at $3.41. Gas on Tennessee Zone 4 Marcellus changed hands at $3.13, up 37 cents, and deliveries to Dominion South rose by 29 cents to $3.48.

Gains at more western market points were robust, but not at the pace of locations in the East. Gas at Demarcation rose by 12 cents to $4.07, and deliveries to the NGPL Midcontinent Pool tacked on 12 cents to $3.72. On Panhandle Eastern Friday parcels were seen at $3.50, up a nickel, and on OGT next-day gas added 8 cents to $3.75. Deliveries to Northern Natural Ventura rose by 18 cents to $4.09.

Weather forecasts changed little overnight with meteorologists calling for below-normal temperatures to dominate the eastern three-quarters of the country out to 15 days. “Our six-10 day map has an area of strong below-normal temperature (-15 F or colder) anomalies for the first time this season as we track a very strong cold air outbreak next week,” said Matt Rogers, president of Commodity Weather Group, in the forecaster’s Thursday morning report.

“Some of the overnight models have strengthened the surface high to levels usually seen in the core of the winter. The European operational and upgraded GFS (parallel) model both show a 1050-1051 mb high-pressure powerhouse dropping down next week. As a result, while our confidence remains high on this cold pattern with good model agreement, we did increase the colder risks to our forecasts particularly for the middle of the country at the point of entry.

“We drop Calgary’s low to below 0 F by next Tuesday morning with this event. The 11-15 day is still cold-dominated, but the models vary on details and none are as strong as the six-10 day. The key though is that the European ensemble keeps the West Coast to Alaska ridge going even at day 15.”

WeatherBELL Analytics forecasts well above normal heating requirements for the next two weeks. Nationally, a whopping 304.3 heating degree days (HDD) are expected through day 15. Last year, 236.8 HDD were seen, and the 30 year average is for 235.1 HDD.

In its Thursday morning release of storage data for the week ended Oct. 31, the EIA reported an increase of 91 Bcf in its 10:30 a.m. EST report. December futures had fallen to a low of $4.111 after the time the number was released and by 10:45 a.m. December was trading at $4.167, down just 2.7 cents from Wednesday’s settlement.

“We were hearing anywhere from 85 Bcf to 90 Bcf, but the market bounced back within minutes. Support is now $4 and resistance is at $4.25,” said a New York floor trader.

Tim Evans of Citi Futures Perspective said that “while it suggests that the seasonal market balance has been slower to tighten than expected, it doesn’t necessarily put the outlook onto a different path. The data is a test, but the market may still be able to pivot back to the cold temperatures in the forecast for the next two weeks and move higher.”

Inventories now stand at 3,571 Bcf and are 238 Bcf less than last year and 261 Bcf below the 5-year average. In the East Region 43 Bcf were injected and the West Region saw inventories increase by 8 Bcf. Stocks in the Producing Region rose by 40 Bcf.

A futures trader Wednesday said, “it looks like up, up, and away and it’s all about the weather. It’s amazing how many 15-day forecasts come out, but I don’t think we are done to the upside,” said the New York floor trader. “I think we have a chance to test $4.35 to $4.38 and then pull back from there. Traders are waiting to see if sustained cold is going to come in the next 15 to 25 days, and I would not be short here. I would look to sell at $4.35 to $4.40.”

CME Group said Thursday it has added dock allocation as another delivery point for its West Texas Intermediate (WTI) Houston futures contracts on the New York Mercantile Exchange. Pending regulatory review, the new delivery point would be effective with the January 2021 contract. The move would allow WTI Houston crude futures to be delivered directly…