High pressures in a stretch of piping likely caused an explosion that knocked the Freeport liquefied natural gas (LNG) export terminal offline, according to federal regulators, who have proposed requirements that could ultimately delay a return to service. 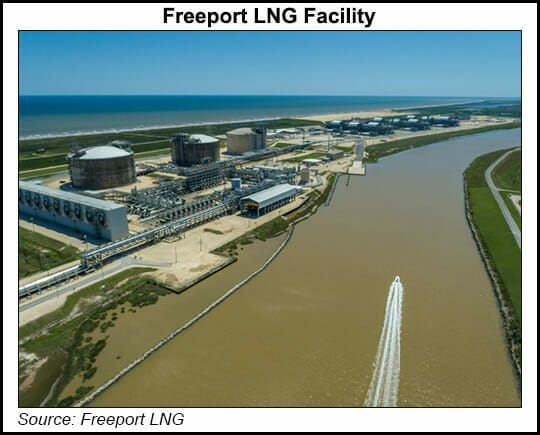 The Pipeline and Hazardous Materials Safety Administration (PHMSA) said the cause of the June 8 incident is still under investigation. However, preliminary evidence suggests an isolated pressure safety valve created an “overpressure situation” in 300 feet of vacuum insulated piping.

“The 300 feet of pipe was subjected to an overpressure situation which burst the pipe and allowed LNG and methane to be released into the facility,” PHMSA said Thursday. The agency issued a notice of proposed safety order Thursday that lays out what must be done before the terminal may return to service.

PHMSA said the failure occurred in an 18-inch diameter insulated pipe that is part of the LNG transfer system and was used to transfer LNG throughout the storage tank area. Other pipelines in those areas were also damaged and will require repairs or replacement before LNG transfer operations may resume.

“As a result of the preliminary investigation, it appears conditions exist at Freeport’s LNG export facility that pose an integrity risk to public safety, property, or the environment,” PHMSA said. Freeport is in an ecologically sensitive area near beaches and waterways used by the public, the regulators noted.

The proposed safety order is routine procedure, but it may complicate Freeport’s plans for restart at a time when global natural gas supplies are stretched thin. The company said in mid-June that it was aiming to return to partial service in three months and expected full service to resume by the end of the year.

“At a high level, the PHMSA is now heavily involved in the investigation and there may be a risk that the Freeport outage extends past the latest 90-day guidance,” said analysts at Criterion Research. The analysts expect a slower ramp-up at the facility that is likely to further impact U.S. storage inventories.

Freeport LNG Development LP said Thursday after the notice was issued that it expects to resume partial liquefaction operations by early October. At that time, the company said it expects to be able to deliver all baseload production volumes. It continues to target year’s end for a return to full production.

“A comprehensive review by Freeport LNG is already underway to ensure that all necessary corrective actions are identified and fully implemented prior to resuming operations,” the company said.

Freeport was given 30 days to respond to or contest the proposed safety order. Under PHMSA’s proposal, the agency would need to approve the restart of the 2 Bcf/d terminal.

A root cause failure analysis also must be completed within 60 days of the order being issued. Freeport has hired a consultant to conduct the analysis.

PHMSA  is also requiring that over the next two months, Freeport submit detailed plans for further inspection and remedial work, as well as operating and control system procedures. Details must also be submitted about personnel qualification and training, in addition to monthly status reports.