Phillips 66 and Enbridge Inc. have agreed to merge and exchange interests in a natural gas liquid-heavy (NGL) midstream firm and crude oil pipeline through a  joint venture in a move management from both companies say will enhance value. 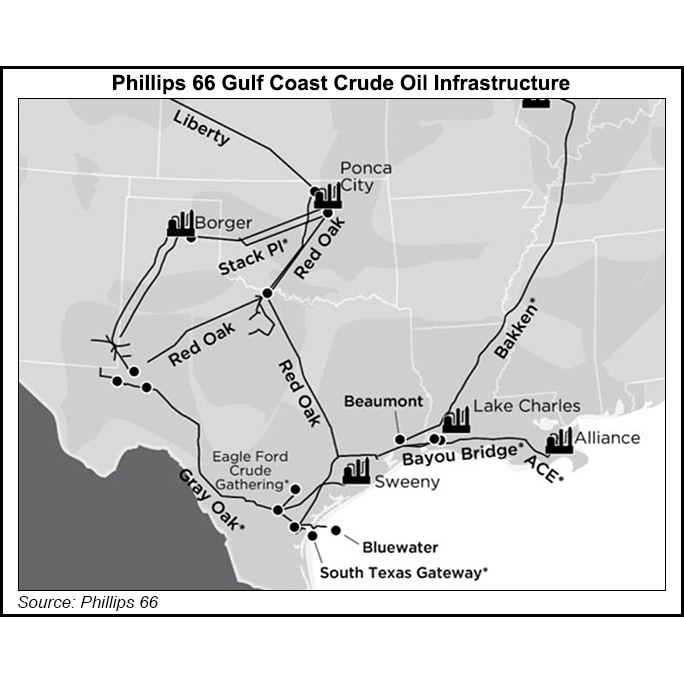 In the deal disclosed Wednesday evening, Phillips would increase its ownership in DCP Midstream LP, a pipeline and gathering service operator focused in the Permian and the Denver-Julesburg (DJ) basins.

Enbridge would also increase its ownership in Gray Oak Pipeline LLC, which holds a key pipeline the Calgary-based firm plans to leverage for growing crude oil volumes from the Permian Basin to its Gulf Coast export site. Phillips would also pay Enbridge $400 million in the transaction.

“DCP is a valued business in our portfolio and enhances our existing value chain from wellhead to market, creating a platform for future NGL growth,” Lashier said.

Along with its leading systems in the Permian and DJ basin, DCP also has assets in the Eagle Ford and Haynesville shales, and the Midcontinent. DCP reported high utilization of the Permian NGL pipelines in the second quarter, as production increased.

Enbridge CEO Al Monaco said the transaction would also help the firm meet its goals of “further building out” its Gulf Coast export position while increasing “value for our shareholders.”

Enbridge estimates around 30% of North America’s oil exports are loaded at its Ingleside Energy Center export site in South Texas. Growth in crude oil and refined product exports lead to a second quarter record for tonnage at the Port of Corpus Christi. Enbridge plans to leverage Gray Oak in combination with Ingleside to handle expected increases in Permian volumes through the decade.

“Through 2030, the company anticipates that Permian oil supply will grow” by 2 million b/d, “enhancing Gray Oak’s utilization and driving increased oil exports off the Gulf Coast,” a spokesperson wrote.

The Energy Information Administration recently forecasted the Permian would lead in oil production gains from August to September. It is also expected to see a boost in natural gas production during the period.

Along with future work to integrate Gray Oak and unlock value, Enbridge plans to use the larger pipeline position to spur renewable projects. The firm could partner with other owners in Gray Oak to develop solar facilities along the pipeline’s right-of-way that would lower its carbon footprint and continue Enbridge’s “solar self-power strategy,” according to the company.

Houston-based Phillips would see its share in DCP Midstream increase to around 43% from 23%, while the Gray Oak stake would decline to 6.5% from 42%. In a separate announcement, Phillips offered to buy outstanding public shares in the company at $34.75/share.

Calgary-based Enbridge’s interest in Gray Oak would increase to nearly 56% from 23%. In exchange, Enbridge would shrink the DCP stake to 13% from around 28% and it would manage the joint venture stakes in Gray Oak.
In a note to clients Thursday, Tudor, Pickering, Holt & Co. analysts wrote that the Phillips move to bolster NGL exposure also complements its investments in its chemical business and the Sweeny hub near the Houston Ship Channel.