Only one of seven proposed liquefied natural gas (LNG) projects is due to start up this year in the Philippines despite decades of planning for imports of the super-chilled fuel in the country, demonstrating the challenges smaller Asian nations face in getting infrastructure built. 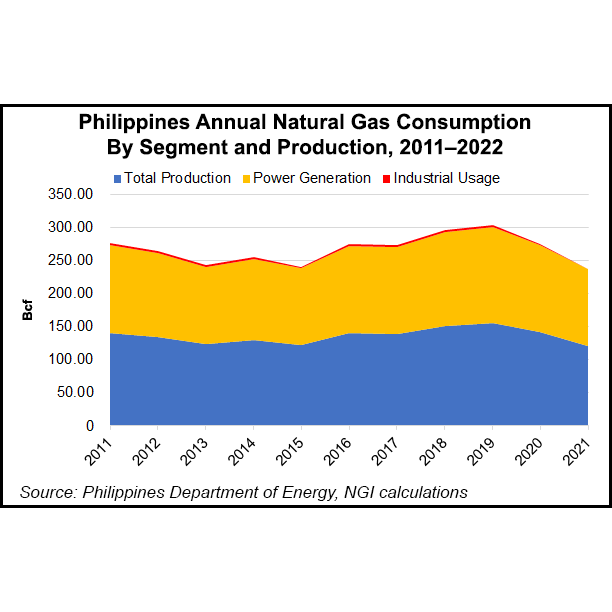 “We see more progress on a wide range of projects, but recent history has demonstrated that getting an LNG import project up and running in the Philippines is challenging,” Poten & Partners’ Jason Feer, global head of business intelligence, told NGI.

Another issue is securing supply for planned projects. Asian LNG projects under development in the Philippines, and in Thailand and Vietnam, face challenges in securing LNG supply at competitive levels. LNG prices continue to trade near record highs on the back of strong international demand linked to the Russian war on Ukraine.

The Atlantic, Gulf & Pacific International Holdings (AG&P) project is a 5 million metric tons/year (mmty) facility. It would be the Philippines’ first LNG terminal and is set to begin operations in August. The floating storage unit is in Batangas Bay.

“The opening of the Batangas Bay import terminal… is expected to see a rise in LNG imports as the terminal ramps up,” said Kpler analyst Matthew Boyle. “Kpler expects the new terminal will operate at around a 45% utilization rate for the first half of 2023, so around 2.2 mmty, before increasing utilization rates and imports” in the second half of 2023, he told NGI.

AG&P was reported to have secured LNG supply for near-term deliveries, but the company did not confirm any details.

Meanwhile, First Gen Corp. and Tokyo Gas Co. Ltd. postponed the September start of their 5 mmty floating storage and regasification unit (FSRU) for the country to the second half of next year. The facility had been on track to import the nation’s first LNG and push demand in Asia further.

Shell plc also is reviving another 3.8 mmty FSRU, but start-up won’t begin until early 2024. Four other projects are in various stages of development.

“First Gen has evaluated offers submitted for its mid‐term supply tender and… saw submissions from companies that include a European trading firm, European utility and two Southeast Asian state‐affiliated firms,” Poten & Partners said in a May report.

Power generation accounts for the majority of Philippine gas consumption, with the Malampaya gas field in the South China Seas providing more than 20% of the country’s power demand. But Malampaya is expected to be depleted by 2027.

The Philippines has no operational LNG import terminals and almost no gas transmission infrastructure.

An additional 43 GW of energy capacity is expected to be needed by 2040 on top of the country’s current 23 GW capacity. Based on government data, coal is the top provider making up 47% of the energy mix, renewables make up 24%, natural gas accounts for 22% and oil provides 6.2% of the nation’s energy supply.

Under recent government mandates, new energy infrastructure is expected to be built as the Philippines plans to use fossil fuels and renewable energy to meet increasing demand. The  country’s population is estimated to rise from 112.5 million to over 140 million by 2040, based on government census data.

“Despite challenges in bringing new LNG projects into operation in the Philippines, the pipeline of proposed projects continues to grow at an unprecedented rate,” said analyst Sam Reynolds, of the Institute for Energy Economics and Analysis.

“But the window of opportunity for LNG projects is closing quickly due to the country’s accelerating shift toward domestic renewable energy alternatives,” as shown by the Philippines’ first successful ongoing Green Energy Auction Program (GEAP), he told NGI.

Under GEAP, 24 qualified power bidders from solar wind, hydropower and biomass sources are competing to bid for 20-year supply contracts for 2,000 MW of renewable energy capacity.

The Philippines’ plans for more fossil fuels and renewable energy come at a time when the United States is driving LNG supply growth additions worldwide, and Asia is likely to continue driving demand growth despite a nearer-term push in Europe to displace Russian energy supplies.

U.S. LNG growth outpaced all other supply additions across the world last year by a wide margin, according to the International Group of LNG Importers (GIIGNL).

Asia purchased 49% of U.S. LNG exports in 2021 and accounted for 73.2% of global LNG offtake, according to GIIGNL. Smaller buyers such as those in Bangladesh, Indonesia, Pakistan, the Philippines, Thailand and Vietnam are expected to increase Asian gas demand in the coming years.