Pacific Gas and Electric Co. (PG&E) last week was sued by a group of government agencies and Sonoma County officials for allegedly causing the 77,000-acre Kincade Fire that ravaged Northern California in October 2019. 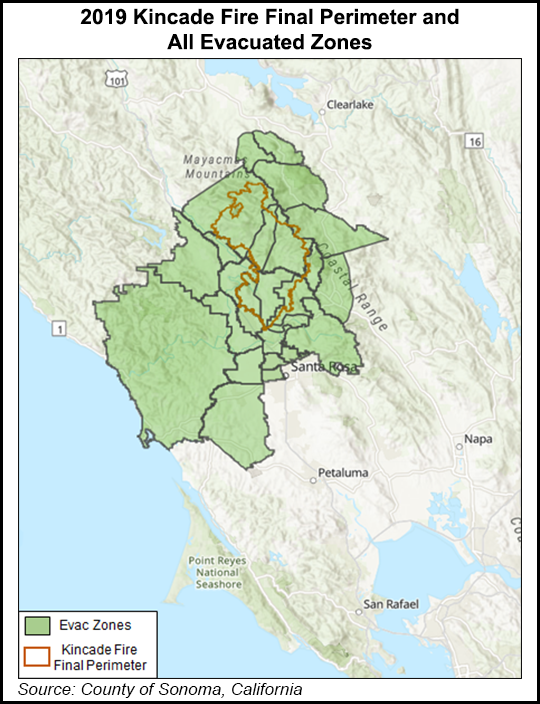 PG&E is still in the early months of Chapter 11 reorganization, but earlier this year, the California Department of Forestry and Fire Protection (CalFIRE) determined the cause of fire as the combination utility’s transmission power line.

During the fire, PG&E reported to the California Public Utilities Commission (CPUC) that a broken cable on a high-voltage transmission tower was discovered in the area where the Kincade blaze was thought to have begun.

Utility spokesperson Ari Vanrenen said PG&E has not had access to the CalFIRE report or any physical evidence, and the transmission tower in question was inspected multiple times last year before the Kincade Fire. PG&E is conducting an investigation.

“All issues that were identified on the tower in question were resolved prior to the Kincade Fire with the exception of one, which related to the painting of the tower,” Vanrenen said. “We remain focused on reducing wildfire risk across our service area while also limiting the scope and duration of Public Safety Power Shutoffs that may occur this wildfire season.”

Sonoma County’s three cities and various local agencies asked the county’s Superior Court for damages from the fire that destroyed or damaged 436 structures during a 13-day rampage.

The county district attorney’s office was furnished with the CalFIRE report blaming PG&E equipment for the fire, and it is to be used to decide if the county wants to file criminal charges.

PG&E’s equipment has been found to be the cause of nearly a dozen major wildfires that have plagued California for the past four years.

In the midst of continuing liability questions, PG&E earlier this month named Patricia K. “Patti” Poppe as CEO. She currently is CEO at Michigan-based CMS Energy Corp. Poppe was also placed on the new board, post-bankruptcy. She assumes her new role Jan. 4, replacing Bill Smith, who has been acting CEO.

Poppe spent 15 years in the automobile industry with General Motors before going to CMS. A Purdue University graduate with degrees in engineering, Poppe also has an master’s degree from Stanford University.