As previewed last month, PG&E Corp., parent of wildfire-devastated Pacific Gas and Electric Co. (PG&E), on Thursday reported net losses for the second quarter as part of a $2.5 billion pre-tax charge for estimated third-party claims related to 14 of the Northern California wildfires that ravaged the state last fall.

During a conference call to discuss 2Q2018 results, PG&E CEO Geisha Williams reiterated that the company continues to advocate for comprehensive policy reforms, including action by the state legislature to remove the “flawed concept” of inverse condemnation (IC), which places the major public utilities in the role of being “backstop insurance providers.”

With the wildfire season already underway this year, investor-owned utilities have been driven to change the state’s approach to IC as California is currently an “outlier” compared to other states, she said.

Williams also used the conference call to outline other “precautionary” steps by the San Francisco-based combination utility that are aimed at not only curbing wildfires but also reducing the big target related to their liability. PG&E’s new Community Wildfire Safety Program is offering technologies aimed at improving fire prevention and responses.

In a regulatory filing in June with the U.S. Securities and Exchange Commission (SEC), PG&E said the charges reflected estimated losses at “the lower end” of the possible range.

Given the continuing pall on the utility that the historic wildfires have created in recent years, PG&E’s quarterly report was dominated by the utility’s responses, which include conducting daily aerial walking inspections and using seven planes to fly routes in risky areas. PG&E also has two new heavy-lift helicopters to support critical utility work and assist with the wildfire responses.

PG&E plans to have more than 200 new weather stations in place around fire-prone areas by the end of this year and expand vegetation clearance work. In addition, the utility has notified about 570,000 homes and businesses served by electric lines in extreme-fire threat areas that the utility may have to preemptively shut off power for safety reasons.

Williams emphasized that PG&E intends to hold out for extensive reforms from the legislature, which can resolve the IC and strict liability issue without a state constitutional amendment. She and other executives expressed support for the newly created state legislative conference committee between the Senate and lower house Assembly that held its first meeting on Wednesday.

“We want to make the conference committee’s work as comprehensive as possible,” Williams said. PG&E is proactively seeking solutions through the courts while the legislative process examines the IC strict liability, the 2017 wildfire costs for utilities and clarifying what should be “reasonable standards.” 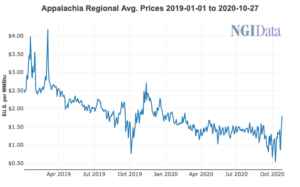 EQT Corp. continues adding to its massive position in the Marcellus and Utica shales, saying late Tuesday that it has acquired all of Chevron Corp.’s Appalachian assets for $735 million in a deal expected to boost operating efficiencies and free cash flow.   Expected to be completed by year’s end, the sale includes 450 MMcfe/d of…