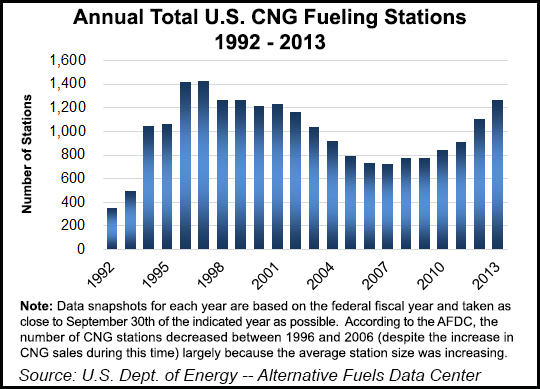 Nick Stavropoulos, PG&E executive vice president for gas operations, said natural gas as a transportation fuel makes sense for light-, medium- and heavy-duty NGVs. He calls it “a proven fuel that can improve local air quality and reduce greenhouse emissions.” Stavropoulos sees PG&E’s CNG fueling program as giving its customers the ability “to take some of the largest polluters off the road, replacing them with NGV alternatives.”

Additional information on PG&E’s NGV involvement is available on its NGV website.

Elsewhere around the nation both CNG fueling and vehicle additions have made some advances in a number of states, although in at least one (Oklahoma) falling oil prices have impacted CNG sales. A neighbor of PG&E’s in San Francisco, PSI Technologies, has introduced an emergency CNG fueling kit that can provide a boost to an empty tank to allow vehicle operators caught short to get to a place to refuel.

The eCNG package is geared for roadside assistance for NGVs, including a lightweight carbon fiber-on-aluminum cylinder made by Worthington, together with Parker Hannifin valves and hoses, and NGV-2 connectors from OPW for the fuel transfers. The cylinder can provide 0.75 diesel gallon equivalents of CNG, what PSI called “a modest supply” to boost an empty tank until it can be fully refueled.

The “cascade method” is used with high pressure from the eCNG package providing flow to the low-pressure of the empty NGV tank. No additional compression or pressure boost is needed, PSI said.

Across the country in South Carolina, utility Piedmont Natural Gas Co. has made plans for an 11th CNG fueling station in its three-state service territory covering Tennessee and North Carolina in addition to South Carolina. It has plans with The Spinx Co. to open a station at the Spinx convenience store in Anderson, SC.

Piedmont plans to lease space at the Spinx location and install CNG compressors and fueling equipment. The utility will own and maintain the store’s CNG public fueling facilities. “The use of CNG as a transportation fuel is growing as is the refueling infrastructure that supports that growth,” said Spinx CEO Steve Spinks.

In Pennsylvania, the state Department of Environmental Protection (DEP) has awarded $7.3 million to 18 companies to help support the purchase of CNG and liquefied natural gas (LNG) heavy-duty trucks.

Meanwhile in Oklahoma, Heartland CNG announced a contract to convert 43 trucks to CNG-gasoline bi-fuel operations for the state Department of Wildlife Conservation. The NGVs are extended-cab Chevrolet Silverado pickups with 5.3-liter direct-injection engines.

Decreased oil prices are impacting CNG’s competitiveness in Oklahoma, according to Justin Steckman, Heartland’s general manager who recently stepped in to buy the company when a prospective buyer backed out due to oil price drops. Gasoline at the pump is now cheaper than CNG in Oklahoma, said Steckman, adding that Heartland is now emphasizing services, such a cylinder inspections and filter changes since the CNG business has slowed.

Nevertheless in the Upper Midwest, Exelon Corp.’s Constellation unit is entering the CNG fueling business with the acquisition of CNG Fuel Inc.’s six stations in Ohio and Indiana and a seventh now under development. Constellation officials said the company will own and operate the stations as public/private-access fueling sites.

Saying the economics of fleet conversions are “compelling,” Constellation officials said they are working with some existing customers to develop, build, own and operate CNG fueling stations to serve customer-owned and third-party contracted fleets.

On a global basis, CNG and LNG both will be the focus of an eighth annual international transportation conference in Prague, hosted by the Czech Gas Association in the Czech Republic. The theme of the conference is “The Prospects for Development and Use of CNG/LNG in Transport.”

And on the competitive side in California, the state’s first hydrogen fueling facility has been certified to sell hydrogen as a transportation fuel to the general public. The California State University, Los Angeles, Hydrogen Research and Fueling Facility gained that distinction last Tuesday.