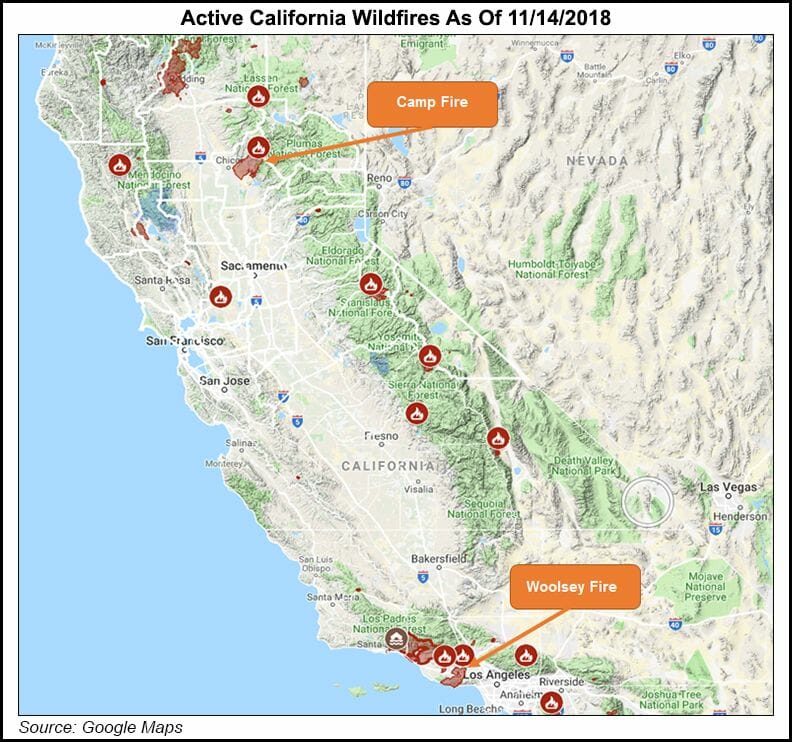 In a Form 8-K filing with the Securities and Exchange Commission (SEC) on Tuesday, PG&E said if its utility equipment is determined to be the cause of the Camp Fire, it could be “subject to significant liability in excess of insurance coverage,” and the fire may pose a “material impact” on the holding company’s and the utility’s financial condition.

PG&E stock has lost at least 43% of its value this week alone, and at one point on Wednesday it was down 30% on investor concerns that the San Francisco-based utility’s insurance may not cover possible losses from the Camp Fire. PG&E stock has lost 53% of its value in the last five sessions, hitting its lowest level since September 2003 when it was emerging from Chapter 11 bankruptcy caused by the 2000-2001 energy market meltdown.

The SEC filing also noted that the PG&E utility has $3 billion in aggregate borrowings and the holding company has $300 million, with no additional funds available. The utility also has up to $1.4 billion in liability insurance coverage for wildfires.

In an update on Wednesday, PG&E said its Emergency Operations Center is open, with crews responding to the Camp Fire in coordination with local agencies and first responders and is helping to clear roadways. There are about 900 PG&E workers already on-site, and the base camp would be able to support as many as 3,000 personnel, depending on restoration and rebuilding timelines.

On Monday, PG&E CEO Geisha Williams was in the area to assess the damage first hand and receive an update from company leaders and crews. “Right now, our primary focus is on the communities and supporting first responders as they work to contain the fire,” Williams said. “We’re getting our crews positioned and ready to respond when we get access, so that we can safely restore gas and electricity to our customers.”

Since Monday, PG&E crews were able to restore electric power to about 2,200 customers that could receive service. As of Wednesday, about 23,000 electric customers and 12,000 gas customers were without service.

“In many cases, immediate restoration may not be possible,” PG&E said. “In those instances, PG&E is looking at a longer term rebuild of the system wherever and whenever customers rebuild their homes, and supporting our communities as they recover and rebuild.” Updates are to be provided as conditions change.

Moody’s Investors Service has issued a negative outlook for PG&E, with credit ratings analysts noting that “additional financial stress” is likely. Analysts are looking for additional legislative and/or state regulatory relief and expect regulators to “ensure PG&E and other utilities remain financially healthy to help the state meet its ambitious renewable energy targets.”

Moody’s also noted that recently passed California legislation (Senate Bill 901) did not provide utilities with any protection regarding fires this year; it was strictly focused on 2017 fires, for which PG&E equipment is thought to be involved in 17 separate fires.

In a preliminary incident report filed with authorities last Thursday, PG&E reported an outage on a 115 kV transmission line in Butte County near the tiny town of Pulga in the area of the Camp Fire. Aerial patrols identified a damaged transmission tower on the Caribou-Palermo line.

“We are not able to share more information beyond what is included in the reports we have filed,” a PG&E spokesperson told NGI. “The cause of the Camp Fire has not yet been determined.”

Before the Camp Fire erupted last week, PG&E had warned select customers in eight counties, including Butte, that it was considering a public safety power shutoff in the face of forecasted high wind and extreme low humidity weather conditions. It subsequently decided not to do so, and the massive fire erupted soon after.

An e-mail communication sent about the time of the Camp Fire’s start apparently indicated that PG&E sought access to a Pulga customer’s property to check on a reported power line sparking, the area that is now the focus of the investigation.

PG&E has been under scrutiny following historic wildfires in the past two years in Northern California. Last year, the California Public Utilities Commission (CPUC) opened a probe into whether utility infrastructure maintenance in Sonoma and Napa counties played a role and state fire officials continue to investigate.

Meanwhile, SCE reported to the CPUC and fire officials about an electrical substation incident near the suspected start of the Woolsey Fire. The utility said it had “no indication from fire agency personnel that SCE utility facilities may have been involved in the start of the fire.”

SCE said field workers “have not accessed the area to assess our facilities in the vicinity of where the fire reportedly began.” At the time of the CPUC report, the fire had consumed 2,000 acres.

As of late Tuesday, the Camp Fire, which has become the deadliest wildfire in state history, was said to be 30% contained after destroying the town of Paradise and killing dozens. The Woolsey Fire had burned more than 96,000 acres and was 35% contained.