U.S. petroleum demand decreased last week, with gasoline and jet fuel demand both down from the prior week and well below 2019 levels. 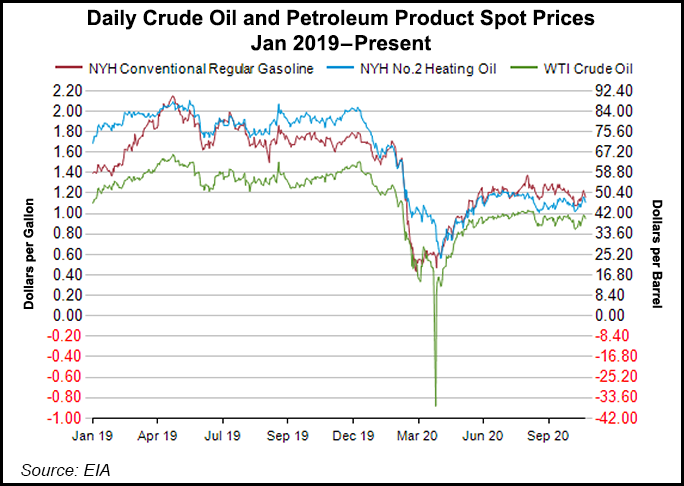 In its latest Weekly Petroleum Status Report, EIA said Wednesday that overall petroleum demand fell 3% week/week and was 8% below levels for the comparable week a year earlier. On a year/year basis, jet fuel use was down 40% and gasoline was off 10%.

Petroleum demand has bounced up and down over the course of this fall on a week by week basis but has consistently remained below year-earlier levels because of the festering coronavirus pandemic’s effects on travel and economic activity.

Analysts expect overall oil demand to remain weak relative to 2019 levels until a vaccine is made widely available.

“It will still take some time for authorization, production and vaccination of people, so oil demand will not benefit in the very short term, but it definitely will benefit in the mid and longer term,” Rystad Energy analyst Louise Dickson said of pending vaccines.

Pfizer Inc. and German partner BioNTech SE said Wednesday their vaccine proved 95% effective in a late-stage trial. The company said it would seek approval from the Food and Drug Administration this month. Additionally, Moderna Inc. said Monday early test results showed its vaccine to be highly effective in protecting people from the virus.

Federal officials anticipate the United States and other countries could begin inoculating people late this year or early 2021, but they have cautioned it will take several months to vaccinate enough people to end the pandemic and that the winter could present a difficult struggle.

The United States reported more than 160,000 new cases on Tuesday, according to a Johns Hopkins University tally. The daily total has exceeded 100,000 since Nov. 3, and the surge in cases this month is greater than any before it.

The Paris-based agency dropped its 2020 forecast by 400,000 b/d and said it expects an annual contraction of 8.8 million b/d. IEA estimated global oil demand to average 91.3 million b/d for the year.

For 2021, the agency predicted demand would increase by 5.8 million b/d, an upward revision of 300,000 b/d from its forecast released in October.

The Organization of the Petroleum Exporting Countries (OPEC) also this month scaled back its 2020 forecasts. It now expects full-year 2020 global oil demand to fall by 9.8 million b/d from a year earlier. That marked a downward revision of 300,000 b/d from its report released in October.

For 2021, the group estimated that demand would recover, expanding 6.2 million b/d, though that outlook also reflected a 300,000 b/d drop from OPEC’s previous forecast.

Both groups said virus outbreaks in recent weeks across Europe and the United States that are necessitating new restrictions on activity are likely to curb oil demand this winter.