Department of Energy (DOE) Secretary Rick Perry said the Trump administration does not currently have an estimate over how much a controversial proposal to extend a lifeline to struggling coal and nuclear power producers would ultimately cost. 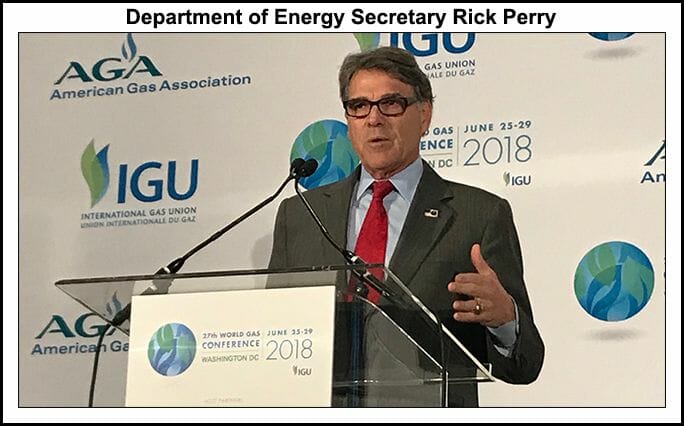 But while a precise estimate is in the works, Perry said that’s not the point.

“You cannot put a dollar figure on the cost to keep America free,” Perry said on Thursday during a press conference at the World Gas Conference in Washington, DC.

Earlier this month, a leaked draft memo revealed that DOE was considering using its authority under two federal laws to compel the nation’s grid operators to purchase electricity or power generation capacity from uneconomic coal and nuclear plants, which have struggled to compete against natural gas.

Although trade associations representing the oil and gas industry are adamantly opposed to such bailouts, President Trump has been a vocal supporter of the coal industry since his campaign for the White House. Perry had argued that a notice of proposed rulemaking (NOPR) presented to FERC last September was a necessary bulwark to maintaining grid resiliency, but the Federal Energy Regulatory Commission unanimously rejected the DOE NOPR in January.

“We’ve taken somewhere close to 100,000 MW of [coal and nuclear] power off the grid in the last few years and then projected over the next two years,” Perry said. “That’s an extraordinary amount. The reason the president looks at this as a national security reason is pretty obvious, once you see the potential for an event,” such as a cyberattack, he added.

“So the cost to Americans — from the standpoint of ‘what’s your freedom worth?’ — we look at the electrical grid as being every bit as important to that effort as making sure that we have the right number of ships, aircraft and military personnel to keep this country safe.”

Perry added that 99% of United States military bases rely upon the civilian grid for power. “I think Americans understand that this is a national security issue,” he said.

According to the 41-page memo, DOE would reportedly use its authority under Section 202(c) of the Federal Power Act, as well as the Defense Production Act, to order grid operators to make the purchases. The memo also calls for the creation of a Strategic Electric Generation Reserve “to promote the national defense and maximize domestic energy supplies.”