ExxonMobil Corp. plans to direct a bigger slice of its capital to U.S. unconventionals, short-cycle plays where activity can be turned up or down as commodity prices fluctuate, CEO Darren Woods said Wednesday. 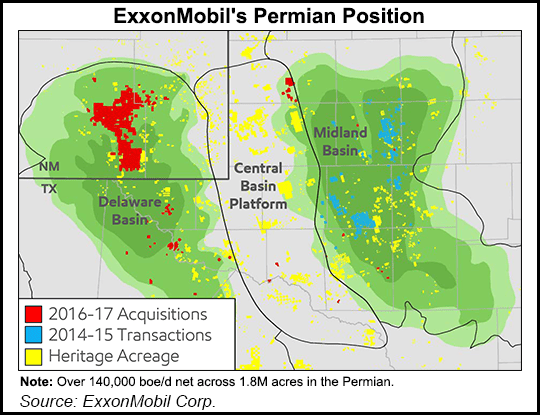 During the annual investor day at the New York Stock Exchange, the newly installed CEO and his management team held court to outline strategy for the next few years. Woods, who joined ExxonMobil in 1992, took over from Rex Tillerson in January. He made clear during the morning meeting that short-cycle unconventionals will take precedence over expensive, exploration endeavors in which the company honed its reputation.

“The shift from long to short is really a reflection of the opportunity that has grown in the short-cycle business,” Woods said. The unconventionals business “isn’t in discovery mode; it’s in extraction mode.”

Management’s “job is to compete and succeed in any market, regardless of conditions or price,” he said. “To do this, we must produce and deliver the highest value products at the lowest possible cost through the most attractive channels in all operating environments.”

The world’s largest producer by market value has set capital spending this year at $22 billion — 16% higher than in 2016 — and it plans to spend about one-quarter of it, or $5.5 billion, to drill unconventional U.S. targets, with the Permian leading the way. Already the largest natural gas producer in North America, ExxonMobil plans to divert a big chunk of the U.S. drilling budget to unconventional fields, which can deliver cash flow within three years, Woods said.By 2018, domestic onshore drilling should absorb about one-half of the global budget, with output forecast to increase every year on average by 20% through 2020.

“Our unconventional portfolio includes acreage in every major basin in the U.S.” Woods said. Through the XTO Energy Inc., which oversees the unconventional business, net production already is “roughly 700,000 boe/d, mostly from unconventional resources. Currently we have over 7,000 drill-well locations that provide attractive returns at $40/bbl or $2/Mcf. That inventory increases to over 24,000 well locations at $60/bbl or $3/Mcf.”

ExxonMobil operates about 80% of its U.S. unconventional assets, which today are focused on liquids production. Expertise also is being applied to international unconventional activity, including a production pilot in the Vaca Muerta play in Argentina, Woods said.

There’s no doubt, however, that the Permian is gentle on his mind, where the company currently has more than 1.8 million net acres and more than 140,000 boe/d net. Since 2014, the company has signed seven Permian-related deals, including one reached in January to capture more than 227,000 net acres in the Delaware sub-basin.

“We anticipate recovery of 3.4 billion boe from multiple stacked pays zones,” Woods said. “The holdings are highly contiguous, and leveraging ExxonMobil’s technology and operating experience, we will drill some of the longest wells in the Permian, reducing development costs and increasing reserve capture.”

Most of the Delaware wells are to have lateral sections running 10,000-12,500 feet. “The ultimate prize in the Permian is significant,” Woods said. “We are confident that our technology will further unlock this resource and grow additional value.”

Since 2014, the company has drilled 179 horizontal wells targeting the Wolfcamp and Spraberry formations of the West Texas/southern New Mexico play. Total unit development cost have been reduced 72% in the last two years to less than $8.00/boe/bbl, while cash field expenses have fallen almost by half to about $5.00/bbl.

“To build upon the success, we’ve dedicated a team to research and develop techniques to maximize lateral lengths, support next-generation well completions and optimize the development of conventional fields,” the CEO said. “These combined efforts will improve recovery and reduce the total number of wells needed. While this data is specific to the Permian, we’ve achieved similar results and other unconventional areas by quickly transferring what we’ve learned and fully leveraging our experience.”

Combined in the Permian and Bakken, there are more than 5,500 wells in inventory that have a rate of return estimated above 10% at $40/bbl, “with nearly a third drawing significantly higher returns,” the CEO said. “This inventory offers significant flexibility, allowing us to drill at a pace appropriate for market conditions…Pace will be driven by leasehold facility developmental, learning curve benefits and technology application.”

During a round table discussion, XTO chief Jack Williams said ExxonMobil’s confidence in the Permian stems from its “ability to really out-compete our competitors there. It starts with acreage position…We went from a good acreage position to a great acreage position,” he said, referring to the January acquisition. “Drilling costs are extremely important to the overall success…

“And I think for a lot of our competitors, it kind of stops there. And it doesn’t for us. What we’re going to be bringing is, No. 1, our research organization has been working alongside our XTO operating unit pretty closely.” Now ExxonMobil is redoubling that effort with a big research focus in the Permian only.

As an integrated operator, ExxonMobil will use its world-scale Gulf Coast refining/petrochemical infrastructure to leverage the natural gas “so we have that full value chain that goes from the acreage position all the way through the market,” Williams said.

One “unique opportunity” is the joint venture reached three years ago with Energy Transfer Partners LP to build out Permian infrastructure, which “secures additional terminal and pipeline capacity to more efficiently transport barrels produced in the Permian and Ardmore basins to liquid markets in the U.S. Gulf Coast,” Woods said. New Gulf Coast projects under development also would add another 340,000 b/d of light crude processing capability.

Don’t look for ExxonMobil to accelerate activity within its North American gas portfolio, however.

“It’s a complicated question,” said Principal Financial Officer Andy Swiger in response to a query about the gas portfolio. “Certainly, the investment in supply has gone down over the past few years. If you follow the rig count, it’s responded to price signals recently and gone up. There has…been a lot of demand built up although it hasn’t raised the overall demand that much.

“We are, when you look at the season we’re in right now and you think about weather and you think where we ought to be and so forth, it would tell you that there’s a little bit of structural shortness as production has actually gone down a little bit.” In turn, the gas rig count has risen, “from about 85 months ago to 150-some right now.

“There’s a lot of potential out there to meet that demand,” Swiger said. “The big question really is infrastructure. A lot of pipelines are being built to connect some of these new sources of supply to the markets, markets that have traditionally been served by depleting supplies.”

The new unconventional gas resources “can connect and can be drilled quickly,” he said. “By and large, I think you’ve got a lot of resource there that’s going to be capable of meeting demand. We hope that demand continues to grow robustly.

“But there’s still a heck of a lot of opportunity serving this huge gas market, which now has an export dimension that is becoming meaningful as well.” ExxonMobil views the U.S. gas market “favorably, but it’s a tough business and you’ve got to be low-cost,” he said.