Venting and flaring natural gas in the Permian Basin continues to dog operators in New Mexico and Texas, but as more pipelines come into service the excess is expected to slowly be recovered. 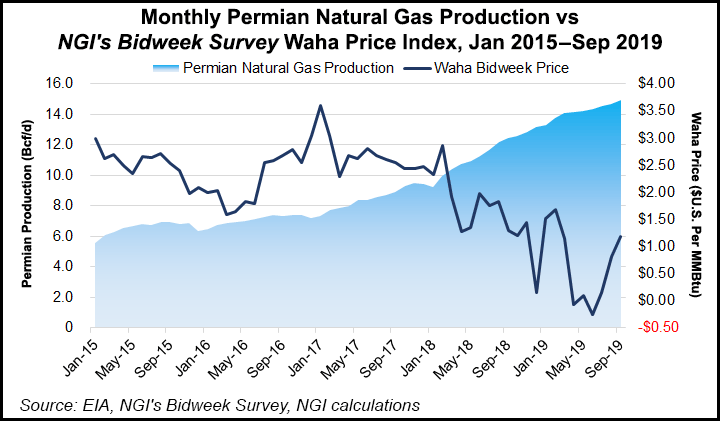 Goldman Sachs analysts did a deep dive on venting/flaring activity in the Permian and said more infrastructure should alleviate the problem — but it will take time.

“Our analysis of Permian flaring activity identifies 0.6 Bcf/d of potential production that could be recovered as new pipeline capacity comes into service,” said Goldman analysts led by Damien Courvalin.

“Granular daily flaring data suggests that 0.15 Bcf/d of this potential production has so far come online, with the rest set to support marketed production growth in coming months.”

Permian gas production is difficult to track given the intrastate nature of offtake pipelines, Courvalin noted, but it should be increasing in the coming weeks as local pipeline maintenance also comes to an end.

“This also suggests that the recent pattern of higher than expected weekly storage injections could be due to underestimated Permian output,” he said.

Beyond the potential underestimated volumes, Goldman analysts said 1.15 Bcf/d of supply growth needs to come from new wells to meet their forecast that Permian production will increase by 2.0 Bcf/d into next year, enabled by GCX.

Through the medium term, Goldman expects “excess” associated gas flaring to subside in the face of looser state and federal regulations. More pipeline capacity is coming online in the Permian over the next year, and operators are aware of the “economic loss associated with such flaring.” In addition, “increased investor and producer focus on reducing emissions” is in producers’ line of sight.

Meanwhile, Rystad Energy said Permian flaring remains near record highs. Analysts estimated that flaring/venting in the basin has stabilized at 600-650 MMcf/d based on preliminary data for 3Q2019. Venting is releasing gas without consumption, whereas flaring is burning excess capacity.

“In New Mexico, vented and flared gas is reported separately and our research indicates that, on average, 5-15% of total flared and vented production stream is vented,” Rystad analysts said.

“In particular, reported data from recent quarters shows a significant decrease in the frequency of venting relative to flaring, with only 8% of waste gas being vented. In the case of Texas, flaring and venting are reported as a lump sum.”

“However, it should be noted that the significant number of new well connections in the second half of 2019 might result in a sustained high flaring level, because from an operational perspective, associated gas flaring is normal in the first two weeks following an oil well completion,” said Rystad’s Artem Abramov, head of shale research.

Rystad’s model is designed to take the latest reported data and activity trends/well productivity metrics to produce a “best possible final estimate” for flaring in the Permian for each county and operator.

Beyond the Permian, exploration-driven gas flaring and venting in the Lower 48 is generally low, except for the Bakken Shale in North Dakota, Rystad noted. Data from North Dakota indicated that 22-23% of produced gas was flared during the summer, which is twice the amount the state has asked operators to achieve.

“Such a high level of flaring has never been seen before,” Abramov said. “The volumes are high not only in absolute terms, but also corresponding to the record high flaring-to-production ratio in recent history.”