The Permian Basin bottleneck, which has led to sharp pricing discounts, is sharply impacting the number of fracture crews and well completions, according to a real-time analysis of more than 15,000 wells across the region, said Westwood Global Energy Group. 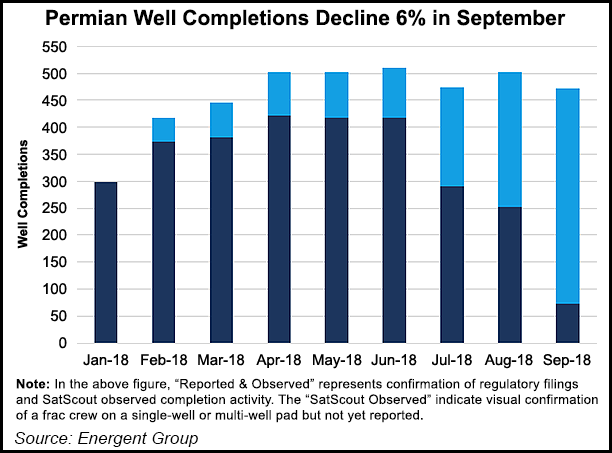 Using daily satellite imagery, machine learning, and the Westwood team of analysts, the firm’s proprietary SatScout service identifies in real time when an exploration and production (E&P) has constructed a pad, rigged up for drilling or started fracturing (fracking) the well with a crew.

In September, the number of observed well completions in the Permian’s Midland and Delaware sub-basins had decreased by 6% to 472 wells from the August total of 502, and completions were down from 510 wells during the peak month of June, Westwood noted.

The decrease in activity equated to the estimated loss of 185,000 tons of frack sand demand for September and a decline in 375 million gallons of water demand for pressure pumping jobs, according to Westwood.

“The Delaware and Midland Basins are paramount to the U.S. shale story,” said Westwood’s Boyd Skelton, vice president of operations. “The public and private E&Ps we monitor are feeling the constraints in the Permian market.

“You can see the softening demand for horsepower, frack sand and water based on the decline in last month’s observed completions. The market is fluid with operators acting swiftly to changing conditions.”

Westwood analysts have been hearing “a lot of conversations about a cooling off in the Permian,” and Westwood wanted to quantify what that meant, said Todd Bush, who founded the company’s Energent Group unit. Energent is Westwood’s North American unconventional market intelligence service.

“Ultimately, we’re getting down to the individual operator level,” zeroing in to determine which E&Ps are being pressured by Permian pipeline constraints and lack of infrastructure,” Bush said in an interview with NGI’s Shale Daily.

“We believe that activity for the remainder of year and into early 2019 will see a dip in completion activity and have less active frack crews” and contracting sand demand. “We are definitely seeing overall numbers kind of flattening out” from the basin’s rapid growth up to the last few months. “It’s largely constraints because of the pipeline constraints.

“It’s a story we all are watching,” because drilled but uncompleted wells are climbing, as public and private E&Ps postpone completion activity.

Schlumberger Ltd., which issued its third quarter results last Friday, seemed to bear the trend out, as did Halliburton Co. on Monday. Schlumberger noted that its OneStim pressure pumping unit did not deploy additional fracking fleet capacity during the quarter and doesn’t expect to deploy more crews through the end of the year.

“Some of the crews that we have operating today we will need to temporarily lay down,” Schlumberger CEO Paal Kibsgaard said. The question is whether to lay off or furlough crews, a challenge the company is pondering “on a daily basis to minimize the impact.” At the same time, the company wants to be ready to maximize its ability to ramp up when the time is right.

According to Westwood data, the top 15 most active Permian operators by number of wells completed in 2018 to date include 13 public and 2 private operators. In September, the top 15 operators accounted for 46% of all activity, which declined by 8% from the previous month. One operator’s well completion activity more than halved.

Public E&Ps with longer-term contracts and larger positions are “not as impacted” by takeaway bottlenecks as smaller and privately held operators, Bush said. As some diversified E&Ps already have indicated, Permian pressures are moving some to other onshore areas to avoid the “heavy discount” to West Texas Intermediate oil prices.
Onshore basins benefiting from the Permian’s constraints include the Bakken and Eagle Ford shales, along with the Denver-Julesburg Basin, “where the differentials aren’t as much and they look much more economic…”

The Permian constraints may last into the first half of 2020, but the ebb and flow in E&P is nothing new, Bush noted. “It’s amazing how short everybody’s memory is.” A lack of pipeline capacity earlier hit the Bakken crimping oil prices, an issue that has since resolved. The dearth of pipeline capacity in Appalachia slammed natural gas prices, but now some are concerned there is too much takeaway coming online.