With Permian Basin crude oil basis widening recently to as much as $8.00/bbl off of West Texas Intermediate (WTI), and as Waha natural gas capacity appears to be tapping out, producers working the widest and deepest stretch of land in the U.S. onshore are likely to face a lot of questions during earnings season, according to analysts. 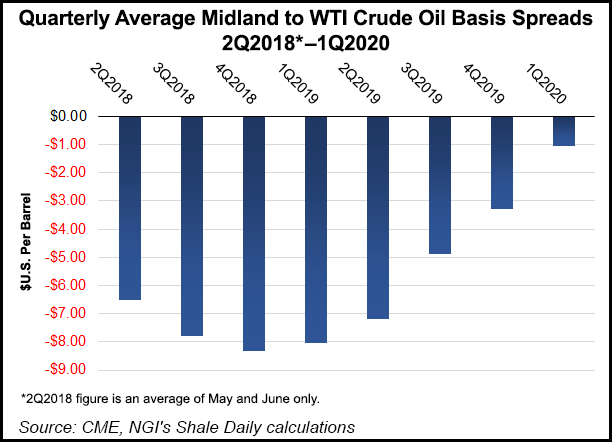 Crude oil pipeline constraints have been at the top of the news lately, and for good reason.

“We currently see only 250,000 b/d of spare refining/takeaway capacity available, and without additional pipes coming until the second half of 2019, we expect basis to remain an issue for the next 12-15 months,” said Jefferies LLC analyst Mark Lear.

“The oil market continues to tighten, with WTI recently trading at the highest level since late 2014,” he said. “We continue to see a deceleration in U.S. shale growth in 2018 vs 2017, which, paired with strong demand growth and inventory levels that have moved near the five-year average, leave us confident in our bullish oil view.”

Many Permian exploration and production (E&P) companies are insulated, but others are not.

For example, leading operator Pioneer Natural Resources Co. is estimated to have 160,000 b/d of firm takeaway, which would cover about 70% of first quarter volumes, while Concho Resources Inc. has about 70% of its 2018 production locked in. Encana Corp. has around 34,000 b/d of basis hedged at 78 cents under WTI, and another 25,000 b/d of firm transport on the Enterprise Product Partners LP system to Houston, which should over all of its Permian output in 2018.

However, pipeline capacity is short and not expected to get much better until the second half of 2019.

East Daley Capital analysts cited the rapid increase in Permian completions that started in January, which they believe may quickly lead to crude oil constraints.

If there were available takeaway capacity when the spread reached $8.00/bbl, it would have been expected that shippers would use walk-up capacity to receive a better rate. “A possible exception would be that if shippers were physically constrained in getting their volumes to the takeaway pipelines.”

Many oil and gas pipeline projects are in the works, but few have finished expanding their pipelines. Enterprise recently expanded capacity on the Midland-to-Sealy pipeline to 540,000 b/d from 450,000 b/d, but “there are few pipeline expansion opportunities to offset the growing Permian production in 2018,” East Daley analysts noted.

DrillingInfo took a look at the well completions picture in the Permian. The Texas sample, which accounts for 80% of all completions, was down at 509 in March from 582 in February, implying there were about 636 total for the entire basin (including New Mexico) in March.

The completion rate remains higher than at any point in 2017, but it still falls short of the estimated 705 wells that were drilled in March, according to DrillingInfo data.

“When considering the increased monthly completions occurring in the Permian, it seems highly likely that the Permian crude production growth will continue to outgrow pipeline takeaway capacity for 2018,” the firm said. “With limited pipeline capacity out of the basin, the spread is expected to widen until other takeaway options become viable such as trucking, railing and in-basin storage.”

“The upstream team has been inundated with phone calls for the last two weeks as clients have worked to understand the ins and outs of our coverage’s marketing positions for oil and natural gas as it relates to Permian-exposed E&Ps. Generally, we sense clients are directionally in agreement with our macro view of $10.00/bbl-plus Midland-to-Houston differentials in the first half of 2019 becoming buyside consensus.”

The basis differential has occurred about four months earlier than analysts had forecast, “but we view it as a warning sign rather than evidence of local saturation, with higher local refinery runs” possibly tightening spot differentials. Nonetheless, we expect that marginal solutions, such as trucking, will be needed to clear the basin in 4Q2018 through the first half of 2019.

“Admittedly, the extent of such trucking volumes and their activation costs remain uncertain, leaving risks skewed to even wider differentials initially, as currently taking place in Canada,” Courvalin said.

Goldman’s forecast already assumed a moderate slowdown in Permian production growth in the second half of this year to account for logistical bottlenecks and pressure pumping shortages. “Acute trucking bottlenecks could lead to well completion deferral and upside risks to Brent prices, benefiting in turn unconstrained basins like the Eagle Ford,” Courvalin said. “Relief will not materialize until the second half of 2019 when new large oil pipes are scheduled to come online.”

“Becoming an export nation is imperative,” Robertson said, and the center of the universe is the Permian.

“U.S. crude exports have ramped to record highs in excess of 2 million b/d with the help of numerous pipeline projects providing access to the Gulf Coast,” he said. “While some may simply view this as economic upside for E&Ps to obtain premium pricing to WTI, we see it as an imperative transition that will need to continue as refineries’ capacity wanes to accommodate lighter crude from the Permian.”

What the market is missing, in the Cowan team’s view, is the extent to which Permian infrastructure constraints will limit total U.S. output growth as actions such as gas flaring “will likely be insufficient to alleviate growing pains.”

The “new” oil cycle is different from ones in the past, Robertson said. “World crude demand will be the long-term factor as always, but this time the U.S. will be a major force in the export market.”

For Permian natural gas takeaway, the investment community appears to be keeping a close eye on second-half 2019 Waha prices as pipeline capacity taps out, excluding Mexico, and “flaring may accelerate in a meaningful way,” said the TPH team.

“Regulations remain in place to allow for producers to flare production, but the magnitude of industry-wide flaring may draw greater regulatory scrutiny.” TPH estimates more than 1.5 Bcfe/d could be flared in the first half of next year.

“It’s too soon to call, but we would be watchful of producer behavior as a temporary widening in oil basis combined with limited gas takeaway options until the startup of Gulf Coast Express in 4Q2019 may push operators to more closely align completions with infrastructure expansion to maximize cash flow generation.”

Regarding natural gas capacity constraints, there is a “shift in the balance of power in the Permian from the upstream to the midstream sector,” Goldman’s Courvalin said. “While this improvement in midstream’s pricing power may at times slow the Permian’s growth, we do not believe it will sustainably impair it,” given the basin’s appeal to master limited partnerships for volume growth and the competition from private equity capital.

“Nonetheless, we believe that the high fragmentation of Permian operators will start to create differentiation, with size and vertical integration increasingly important in securing new midstream offtake capacity, and ultimately delivering production growth,” he said.

Any rebound in Waha gas prices also may be short-lived, and the long-term outlook remains challenged, according to BMO Capital Markets analysts Danilo Juvane and Phillip Jungwirth.

“We estimate Permian gas capacity at approximately 10 Bcf/d, with an incremental 5 Bcf/d on the come via recently sanctioned and announced growth projects. While existing capacity screens as adequate relative to our estimated 4Q2017 residue gas production of about 7.9 Bcf/d, our production forecasts point to a notable dearth in Permian gas takeaway that we think could markedly drag Waha basis for at least the next four years.”

Implied gas pipeline utilization suggests there is ample takeaway capacity from the Permian, but Waha basis to Henry Hub mostly has traded at a discount since February 2017, averaging about 30 cents/Mcf over the last year, according to the BMO analysts.

Waha basis rebounded to trade at a premium in February, but “the long-term outlook remains rather bleak as our base production forecasts point to significant takeaway shortages over the coming years, even after assuming that all proposed projects such as Permian-to-Katy and Pecos Trail are ultimately commercialized,” said the BMO team.

“To this end, we think that Waha basis discounts could be the new normal over the next few years, especially as producers’ primary focus on crude oil economics lessens the incentive to contract capacity for natural gas, the least valuable commodity in the Permian.”