The Permian Basin, which led all of North America for activity and acquisitions during 2016, is seeing its streak continue into the new year, as two producers buy West Texas leaseholds and a privately held midstream operator launches plans to expand natural gas takeaway in New Mexico. 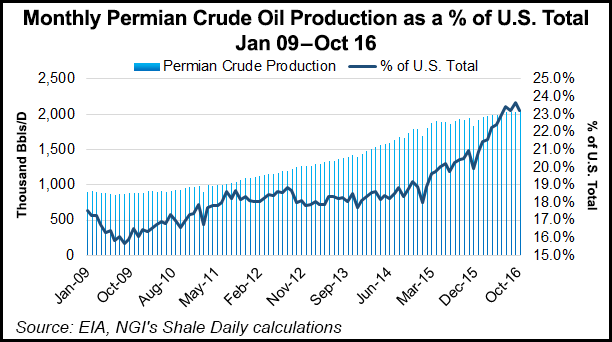 In one exploration and production (E&P) deal, Denver-based PDC Energy Inc. agreed to pay Fortuna Resources Holdings LLC $118 million for 4,500 net acres in Reeves and Culberson counties, giving it operatorship and 100% working interest in the Delaware sub-basin leasehold. Current net production is about 300 boe/d; there also is a drilled but uncompleted horizontal well and a saltwater disposal well.

As important, the new leasehold, which increases PDC’s estimated reserve potential by around 10% in the basin, is concentrated in an acreage block contiguous with a recently closed acquisition of 57,000 net acres in the two West Texas counties.

“This bolt-on acquisition is a great example of our strategy to both expand and block up our core Delaware Basin position,” said CEO Bart Brookman. “Our net acreage, drilling inventory and estimated reserve potential in the basin are expected to increase by approximately 10% with this transaction. Additionally, by creating a large, contiguous acreage block, we have the opportunity to focus on longer lateral development while optimizing our operational efficiencies.”

Using assumptions from the other Delaware acquisition, PDC estimated the newly acquired acreage contains 75 gross one-mile horizontal drilling locations, based on four wells per section in each of the Wolfcamp A, B and C zones.

In a second transaction also announced Wednesday, Houston American Energy Corp. agreed to pay $1.1 million to Founders Oil & Gas III LLC to acquire a 25% working interest in about 800 acres in Reeves County. Founders would continue to operate the acreage. Drilling an initial well is expected by July 1, also targeting the Delaware sub-basin.

“After evaluating numerous opportunities over the past year, we are excited to have identified and agreed to participate in this Delaware Basin prospect and to develop a long term relationship with Founders,” said Houston American CEO John P. Boylan. “We expect to initially target the Wolfcamp Shale and Bone Spring formations, commonly referred to as the Wolf Bone play.”

The buy-in with Founders expands the Houston-based E&P’s focus, which up to now has been concentrated along the Gulf Coast in Louisiana and Texas. It also explores and develops prospects in Colombia.

Sendero’s facilities are to consist of low- and high-pressure gas gathering pipelines, a 130 MMcf/d cryogenic processing plant and a natural gas liquids takeaway pipeline. The midstream assets, in an area of the Permian considered infrastructure-short, are expected to begin operations in 3Q2017.

“The northern Delaware Basin is one of the most prolific and active drilling areas in North America, and we are excited to begin construction of this system,” Sendero CEO Clay Bretches said.

U.S. upstream transactions nearly doubled in 2016 following a seven-year low in 2015, triggered by a surge of Permian activity, oil and gas researcher 1Derrick said last month. Permian merger and acquisition activity as of mid-December accounted for almost $26 billion in value, with more than $20 billion alone since the end of June. The Permian also represented 10 of the 20 largest deals last year.