The active number of U.S. fracture spreads jumped nearly 15% month/month in February, driven by strength in the Permian Basin, even as “Snowvid” shut in wells and sent crews packing, according to Tudor, Pickering, Holt & Co. (TPH). 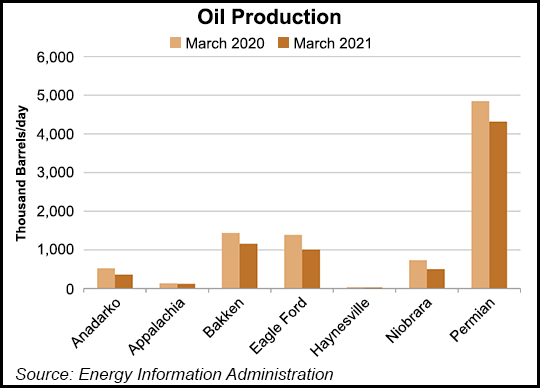 Data compiled by TPH indicated that oilfield services (OFS) operators increased the number of crews working in the fields over January. According to the most recent monthly Drilling Productivity Report by the U.S. Energy Information Administration (EIA), overall oil and natural gas production from the Lower 48’s seven major basins was projected to decline in March from February.

The fracture fleets, or “frac spreads” as they are known, averaged 185-190 fleets last month from 160-165 in January, according to TPH. A spread is the hydraulic fracturing equipment used at one site to complete a well.

Last month’s “gnarly weather and associated power/oilfield activity impacts no doubt took some wind out of the OFS sails, driving unexpected white space on the calendar and creating some logistical nightmares, but we don’t think these issues will prove long-lived,” analysts said.

Fleets working in the fields were shut down for five days to two weeks because of the nasty winter weather, with “most folks experiencing a seven-day hit.”

The Permian, the most active play in the Lower 48, “sat firmly in the driver’s seat last month, pulling the U.S. frac spread count up by its bootstraps,” analysts said. Activity in the Permian climbed by 18-22 spreads from January, a 30% increase.

By comparison, the other active U.S. basins collectively saw frac fleets on average up by fewer than five over January.

The Eagle Ford Shale in Texas reported a “decent jump on an absolute and a percentage basis,” with the addition of five to seven spreads. The Denver-Julesburg Basin of Colorado also saw its spread count jump by slightly under five spreads.

However, weakness in the Bakken and Haynesville shales “dented the strength there.”

Because of the sharp increase in activity during February, the fleets are at “levels we didn’t expect to broach until April/May,” according to the TPH team. “We’re firmly in the range that should be sufficient to hold U.S. onshore crude oil production flat year/year on an exit-to-exit basis.”

The active spread count is said to still be moving higher, analysts said, and that means prices also could climb.

“With this monster month/month move, there may be some truth to the idea that frac prices could begin to drift higher by/before mid-year.”