The U.S. rig count fell by 10 to 1,016 for the week ended Friday (March 22), driven by a slowdown in the Permian Basin, according to data from Baker Hughes, a GE Company (BHGE). 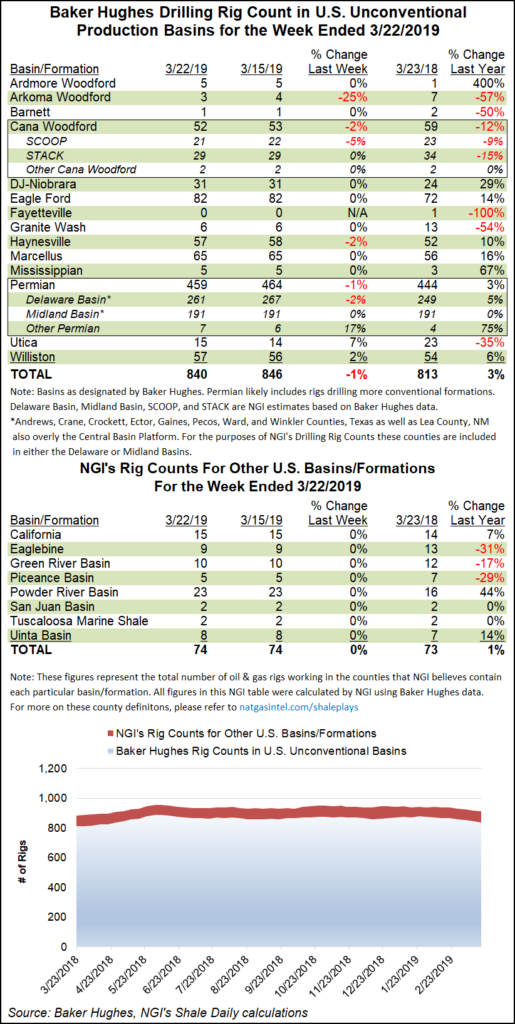 Changes to the domestic tally for the week mostly stemmed from a net loss of nine oil-directed units, with one natural gas-directed unit also leaving the patch. The U.S. count still finished the week outpacing the year-ago tally of 995 units.

In the United States, seven horizontal units departed, along with two directional units and one vertical. The Gulf of Mexico saw two rigs pack up shop, dropping its tally to 20, but still 13 higher than a year ago.

Losses were even steeper to the north in Canada for the week, as 56 units packed up shop, including 49 oil-directed and seven gas-directed. That left the combined North American rig count at 1,121, down from 1,156 in the year-ago period, according to BHGE.

Among plays, the largest change occurred in the Permian. Five units departed on the week for the West Texas and southeast New Mexico play, putting its latest count at 459, up from 444 a year ago. Other major plays BHGE tracks saw small week/week adjustments.

The Utica Shale and Williston Basin each added one rig for the week, while the Arkoma Woodford, Cana Woodford and Haynesville Shale each saw one rig exit.

Among states, declines in Texas (down four) and New Mexico (down two) roughly corresponded with the down week in the Permian. Louisiana dropped three units from its tally to fall to 62 (57 a year ago), while Oklahoma dropped two units to end the week with 109 (120 a year ago).

Also among states, Alaska and West Virginia each dropped a rig from their respective tallies, while North Dakota, Ohio and Pennsylvania added one each.

Looking across the exploration and production landscape recently, Ohio pure-play Ascent Resources LLC, the Utica’s largest producer, said in a rare operational update that it expects to reach at least 2 Bcfe/d of production this year. The privately owned producer said it achieved record production of 2.4 Bcfe/d gross and 1.9 Bcfe/d net in December, and this year is forecasting net production to average 2-2.2 Bcfe/d, consisting of 90% natural gas, 7% natural gas liquids and 3% crude oil.

“We believe 2019 will be an inflection point for Ascent as we achieve a size and scale that should allow us, at current strip prices, to reach cash flow neutrality before the end of 2019 and generate significant free cash flow in 2020 and beyond,” said CEO Jeff Fisher.