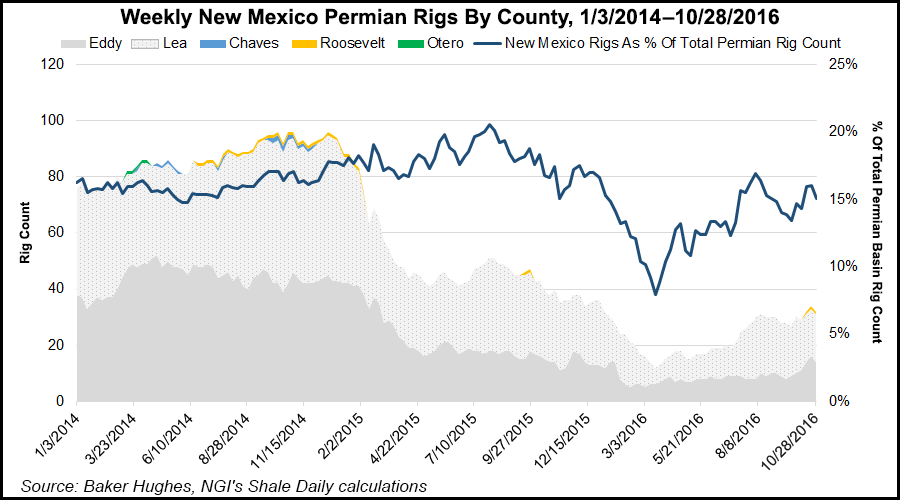 The Permian is where Oxy has advanced it sub-surface analytical expertise to “leverage geology, petro-physics and chemistry expertise” to achieve breakthroughs while capital and operating costs have fallen, said Oxy’s Jody Elliott, president of U.S. oil and gas operations. Elliott told analysts during a conference call to discuss quarterly results that Oxy would be a leader across its leasehold in “realizing maximum value per acre by optimizing recovery and capitalization.”

The key is to gain competitive returns from Oxy’s unconventional businesses, even in a low-cost environment, said Elliott. For instance, he said the Houston-based producer tested a second Bone Spring formation slick water hydraulic fracturing design in the Cedar Canyon 27-fed 5-H well, which used 2,000 pounds of proppant/foot and 50-foot cluster spacing. Cumulative results from the first spacing exceeded designs from the first half of this year, “and we expect to see continued improvement in future results.”

Based on the latest test in New Mexico, Oxy is targeting an average well cost of $7.1 million for the second Bone Spring results, and $8.3 million for the third one, including 7,500-foot laterals and increased completion times.

“Overall, we are very encouraged by the development and appraisal results in southeast New Mexico, and we expect to increase activity there in the fourth quarter this year and throughout 2017,” he said.

Oxy CEO Vicki Hollub during the conference call said southeastern New Mexico was “in a prime position for aggressive development.”

In response to questions from analysts, Elliott emphasized that New Mexico would be “one of the key places for us to operate in 2017.” The company has spent a lot of time and effort “in the appraisal mode” this year, testing the third Bone Spring, the XY and other formations.

“We will continue as part of our development plans to appraise those other benches, particularly since New Mexico has many bench opportunities beyond what we have talked about previously,” Elliott said.

While noting that generally “more sand and tighter cluster spacing is generating better results, along with longer laterals,” Elliott said Oxy would be developing some advanced ways to tap multiple benches.

“New Mexico will average almost 5,000-foot laterals this year, and go to 7,000 feet next year,” he said. In the Texas portion of the Permian, the Delaware sub-basin is expected to average 5,000-foot laterals this year “and go to more than 9,000 feet next year. The combination of longer laterals is giving us better EURs [estimated ultimate recovery] and better decline profiles, combined with the continued integration of our science and stimulation design.”

Throughout the Permian, Oxy expects to introduce “innovative ways to access multiple benches.”