ExxonMobil Corp. may have the largest natural gas portfolio in North America with Chevron Corp. not too far behind, but the biggest U.S.-based operators today are focusing their attention on oil and liquids — a strategy that paid off during the second quarter. 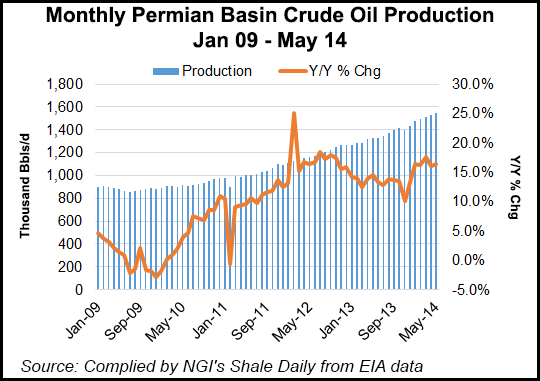 ExxonMobil has put its gas prospects on the shelf, but it hasn’t neglected the liquids, with domestic output climbing in the second quarter by 38,000 b/d from a year ago.

The super major issued its quarterly results on Thursday, with investor relations chief David Rosenthal on hand to answer questions. He pointed to three big plays that are carrying ExxonMobil’s biggest production in the United States: the Permian and the Ardmore basins, and the Bakken Shale.

Production from the three big liquids targets was more than 200,000 b/d in 2Q2014, up more than 25% year/year. With all of its formations, and based on the success of other producers, ExxonMobil is putting most of its resources into the Permian.

Across its 1.5 million acres in the Permian, production is on the rise throughout the Midland and Delaware subbasins, Rosenthal said. Most of the acreage is fee acreage, which reduces the royalties paid. During the second quarter, ExxonMobil added another 26,000 net acres to its Permian portfolio, nearly all in the Midland subbasin.

ExxonMobil is working several areas in the play, giving it the opportunity to develop conventional and unconventional fields, as well as test waterfloods and carbon dioxide projects for enhanced oil recoveries.

Today, the oil major has 65 workover rigs running in the Permian, in addition to 11 rigs dedicated to exploration. Five of those rigs are drilling horizontals in the Wolfcamp and Bone Spring positions, with 93 total wells brought online this year. “That’s up almost 70% from last year about this time,” said Rosenthal.

Based on the early results from several formations, “we are just now beginning to scratch the unconventional plays and getting some of those wells down and see what we’ve got going on.”

Another “big-time focus area” for the Irving, TX-based major is the Ardmore Basin of Oklahoma. In the Bakken, 12 rigs are operating.

“The opportunity is there,” said Rosenthal. “We’re developing it, and we’re seeing that production increase right in line with our expectations.”

Chevron issued its quarterly results on Friday, and although its global production was down from a year ago, like ExxonMobil’s, North America performed above expectations.

Upstream chief George Kirkland, who spoke during a conference call, also pointed to solid success in North America’s onshore, and again, in the Permian. Chevron has 27 active rigs in operation there, and it has drilled 265 wells to date.

Kirkland claimed that Chevron today is the largest producer in the Permian, with an enviable acreage position.

“We have 170,000 well prospects identified, with the potential to add 8,000 to 10,000 more,” he told analysts. “Our approach has been to allow others to derisk the acreage” before moving in, giving the operator the ability to focus on development rather than exploration and appraisal wells.

Up to now, he said, many of the wells drilled in the Midland and Wolfcamp were vertical wells. Earlier this summer, Chevron drilled its first horizontal, and it’s going after more.

“We have 17 rigs in the Midland and 10 in the Delaware Basin, where we added two rigs this quarter,” said Kirkland. “We’re on schedule to drill more than 500 wells this year in the Permian Basin.”