Permian Basin independents Laredo Petroleum Co. and Pioneer Natural Resources Co. are joining their peers in adjusting to the new “normal” by reducing spending and activity to deal with the crushing reversal in energy demand wrought by Covid-19. 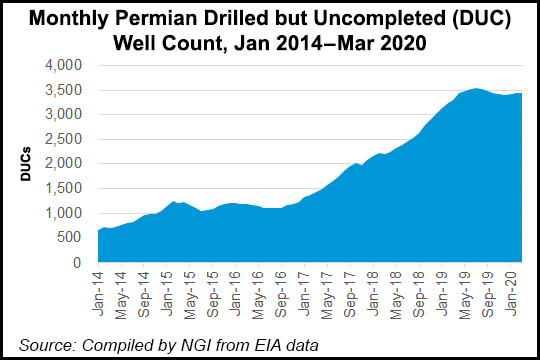 In their first quarter results, the Permian pure-plays each said they expect to come out on the other side of the pandemic in solid financial shape.

“The challenges presented to the oil and gas industry by the demand destruction and price volatility” from Covid-19 and the Saudi-Russia price war “are unprecedented,” Laredo CEO Jason Pigott said.

Since the pandemic erupted, capital expenditures (capex) have been cut by more than 40%. Capex initially was cut to $290 million from $450 million, and it now has been reduced again to $265 million.

Still, for the fifth consecutive quarter, the Tulsa-based independent still surpassed total production guidance while reducing costs. Output climbed by 3% sequentially to 66,532 boe/d, with oil output up 7% to 29,178 b/d.

Pioneer CEO Scott Sheffield said times may be tough but the Dallas-based independent is tougher. The company failed to win over the Railroad Commission of Texas to mandate all of the state’s producers to reduce output by 20%, but expects to be all right regardless.

“Pioneer entered this difficult environment with one of the strongest balance sheets in the sector, and it is our plan to emerge from this downturn in a similar position,” he said.

The operator has reduced capex for the second time in two months, now by 55%, or another 10% ($300 million) from March. Sheffield has elected to take a 70%-plus reduction to cash compensation, while the officers and board also have volunteered to reduce compensation.

The firm has around $784 million of unrestricted cash on hand and net debt of $1.9 billion. The company ended March with an estimated $2.4 billion of liquidity.

Changes have been made to 2020 plans to deal with the downturn. Lower margin and higher cost vertical wells have been curtailed in the Permian, with the shut-in totaling around 7,000 boe/d.

“Any additional voluntary curtailments will generally be an economically driven decision evaluated on a well-by-well basis,” management said. “Based on past experience, the company does not expect any well performance issues when the curtailed wells are returned to production.”

From the end of March to the end of the year, Pioneer plans to operate an average of five to eight horizontal rigs in the Midland sub-basin and operate two-three fracture fleets. Future activity levels are to be assessed monthly.

Oil production this year is expected to average 198,000-208,000 b/d, with total output around 341,000-359,000 boe/d including 7,000 b/d of curtailments. The production outlook does not include “the potential for any additional curtailments,” management said. Because of the “unprecedented volatility and uncertainty in commodity markets,” quarterly production guidance also is suspended.