Permian Basin pure-plays Laredo Petroleum Inc. and Centennial Resource Development Inc. each reported production impacts from the freezing weather wrought by Winter Storm Uri during February, but the storm also resulted in a sharp uptick in revenue from selling more oil and gas. 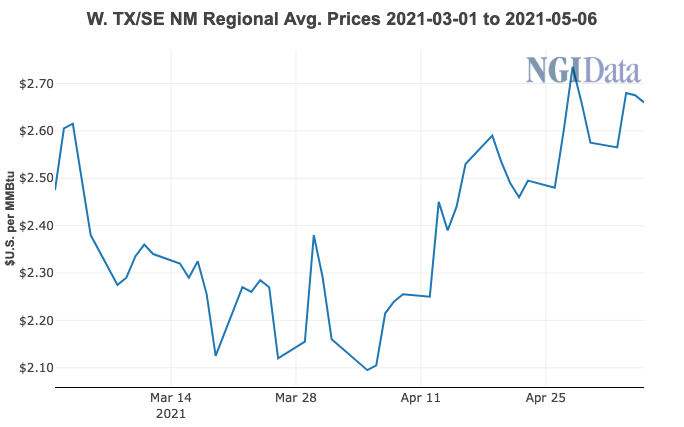 Tulsa,OK-based Laredo reported Permian volumes were down year/year at 78,989 boe/d from 86,532 boe/d, in part because of the freeze that slammed Texas during February.

The executive team held firm, though, on keeping costs down and efficiencies up, Laredo CEO Jason Pigott said during the quarterly conference call.

“We maintained a disciplined approach to personnel expenses, continued to drive well costs lower, substantially outperformed our assumptions for lease operating expenses and quickly and safely overcame disruptions that arose from adverse weather in the Permian Basin,” Pigott said.

Transitioning development to Howard County in West Texas “is driving an inflection point in the company’s capital efficiency, and we are continuing to optimize our land position and development plan to facilitate further improvements.”

Winter storms in the Permian temporarily disrupted production activity, as well as drilling and completions operations. The total impact to production was 5,700 boe/d, with 1,700 b/d of oil impacted.

Laredo in May was operating two drilling rigs and one completions crew in Howard County and was expecting to complete the 13-well Davis package by the end of June.

Regarding its environmental, social and governance (ESG) initiatives, Laredo in February committed to significant reductions in the Permian to its greenhouse gas intensity and methane emissions, setting a goal to eliminate routine flaring by 2025.

The board also has integrated targets to reduce flaring and reportable spills into the executive compensation program, linking 15% of the short-term incentive program payout to these metrics.

Meanwhile, Denver-based Centennial, whose operations are based in the Permian Delaware sub-basin, said total production averaged 54,202 boe/d, versus 71,820 boe/d in 1Q2020. Uri also was blamed on the shortfall, with average output from 4Q2020 down 9% and oil volumes declining 6%.

Volumes were “impacted by a lack of completion activity during the prior quarter as well as production downtime” from Uri, CFO George Glyphis told investors during the quarterly conference call.

Uri and related power outages during February shut down most of Centennial’s production over seven days.

“We expect that first quarter levels will be a low point for the year as production rebounds in the second quarter,” Glyphis said.

CEO Sean R. Smith said Centennial “has now transitioned to a sustainable free cash flow generating company. At current strip pricing, we expect to continue to repay borrowings on our credit facility and organically delever the balance sheet through year-end.”

Centennial operated a two-rig drilling program with one completion crew during 1Q2021. “During the quarter, we reduced our spud-to-rig release times by 11% compared to the prior-year period, while increasing our average lateral length by 17%,” said Smith. “As a result, our operations team achieved an average gross well cost of $795/lateral foot for the quarter.”