Ring Energy Inc., whose drilling expertise is focused in the Permian Basin’s Northwest Shelf and Central Basin Platform, has joined its peers and suspended all operations pending an improved outlook for the energy industry. 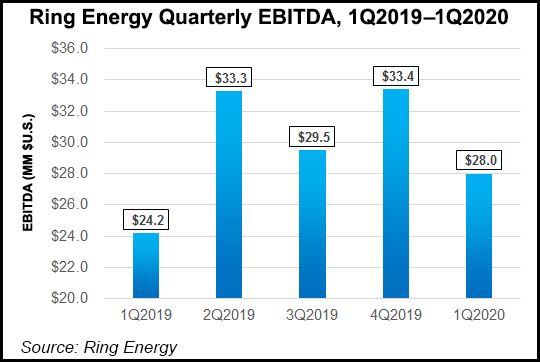 CEO Kelly Hoffman during the first quarter conference call to discuss results shared what is on everyone’s mind who works in the energy industry.

“Every operator right now is experiencing an unstable, unpredictable pricing and storage dilemma,” he said. “And because of the lack of storage capacity, there is a large differential” between West Texas Intermediate oil spot pricing and the “actual price a buyer is willing to pay for the wellhead price.

“Until the markets improve and we begin to see the world economics at work again, we have to be prepared for this continued uncertainty.”

The first quarter was “a challenging time for all oil companies,” he said. It had started strong for the Midland, TX-based independent before the oil price bottom fell out. Reaction was swift, as Ring became one of the first Lower 48 operators to slash spending and curtail development.

“Prior to suspending all drilling operations in early March, the company had drilled four new San Andres horizontal wells and completed two additional wells on its Northwest Shelf property.” The four wells exceeded expectations, he said, with average initial production rates of more than 600 boe/d.

However, as oil prices declined and the differentials between spot prices and well head prices increased, management moved to cut costs and conserve cash.

“In the absence of any additional drilling, we have made additional cuts to our capital expenditure budget for 2020 and estimate it to be between $25-27 million,” Hoffman said. “With the hedges we have in place and the cost-cutting measures we have made to date, we are confident that Ring will come through these turbulent times and emerge postured to become a better and stronger company than before.”

There have been some positives for Ring since the start of the second quarter. The company drew $21.5 million on its credit facility, increasing the outstanding total to $388 million for a good reason, CFO Randy Broaddrick said.

“In mid-April, we drew down an additional $21.5 million to take advantage of discounts being offered by a number of our suppliers and vendors regarding payment of their invoices,” he said. “To date, we have saved the company over $2 million.”

Also in mid-April, Ring clinched a sales agreement for the Permian Delaware sub-basin acreage for $31.5 million, which included a $500,000 nonrefundable deposit. The transaction is expected to be completed by the end of June.

Core assets in the “Northwest Shelf and Central Basin Platform offer us years of development and growth,” Hoffman said. “We stand ready to resume drilling activity once we see stability in the marketplace return…”