Ring Energy Inc. on Monday reduced its capital expenditures (capex) for this year after it trimmed the number of new horizontal wells to be drilled and reallocated funds to upgrading existing wells and infrastructure. 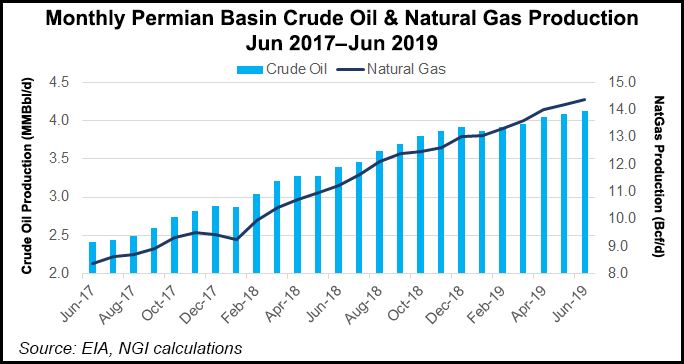 The Permian Basin pure-play, which works in West Texas and southeastern New Mexico, plans to spend $154 million for capex, down $2 million from a budget issued in April. The number of new horizontal wells to be drilled is set at 32, down from 50.

The company drilled 20 horizontal wells and four saltwater disposal wells in the first six months. It was running one rig in the first three months, then added another when it completed an asset acquisition from Wishbone Energy Partners LLC.

The transaction nearly doubled production to 12,200 boe/d and gave Ring a bigger position in the Central Basin Platform (CBP) and the Northwest Shelf (NWS). Ring has since dropped one of the two rigs.

“When we completed the Wishbone acquisition in early April and moved a second drilling rig onto property, it was with the intention of maintaining a two-rig drilling program (one rig on the NWS/one rig on CBP) for the remainder of 2019,” COO Danny Wilson said. “The preliminary results we are seeing on our initial new horizontal wells on the NWS property…confirms our assessment of what this acquisition means to the company now and in the future.”

Once the company began a well-by-well examination of the property, “it became immediately clear there was an opportunity to increase current production and efficiencies by means of reworks and/or upgrading equipment,” Wilson said, similar to what the company experienced when it acquired Permian Delaware assets in 2015.

“We had already identified a number of existing wells on our CBP that, through their normal cycle, had become rework or upgrade candidates and, by combining the number of wells on both properties, presented us with an opportunity to redeploy funds…”

The plan is to improve the overall efficiencies and production on 40 existing wells, upgrade existing infrastructure for future development and reduce capex to ensure cash flow neutrality.

“We drilled 13 new horizontal wells in the second quarter, 11 of them are in varying stages of completion and testing,” the COO said. “This effectively has begun to replenish an inventory of new wells coming on production quarter over quarter. We will maintain one drilling rig and continue to drill new horizontal wells on our NWS property, focusing on areas that in the past have shown excellent results.”

“When we announced our preliminary capex in April, we expected to increase it based on maintaining a two-rig drilling program and performing the necessary upgrades to infrastructure and existing wells on our existing properties,” CEO Kelly Hoffman said.

“Upon completion of the Wishbone property, and after examination of the asset, it became very apparent that by redirecting funds earmarked for drilling to accomplish those upgrades on our two primary assets (CBP/NWS) would have a very positive effect and bring us closer, with greater certainty, to our goal of cash flow neutrality by year-end.”

Hoffman also discussed the macro environment for oil and gas.

“We are in a very unstable commodity environment,” he noted. “The energy sector, as a whole, is definitely out of favor, and the only factor that appears to have the investment community’s attention is the ability to operate within cash flow. That has been and continues to be our primary focus.”

Ring’s stock is “tremendously undervalued,” he said. “We were recently notified that one of our largest institutional shareholders had decided to close its doors on June 30 due to the retirement of one of the founders and had redistributed its position in Ring (REI) stock to its investors.”

Ring also is investigating the “dramatic increase in the ‘short’ position in the company’s stock.

“As CEO of this company, I can assure all our shareholders that their company continues to operate efficiently and effectively. We have built a tremendous group of assets which will provide years of opportunity and growth. Although we took on additional debt with the Wishbone acquisition, we have no need now or the foreseeable future to access the capital markets and stand ready to accelerate our operations and drilling activity when we see a more stable market.”