Less than a month after its CEO stepped down, the new head of Halcon Resources Corp. said the board plans to review financial and strategic options, including a potential sale or merger. 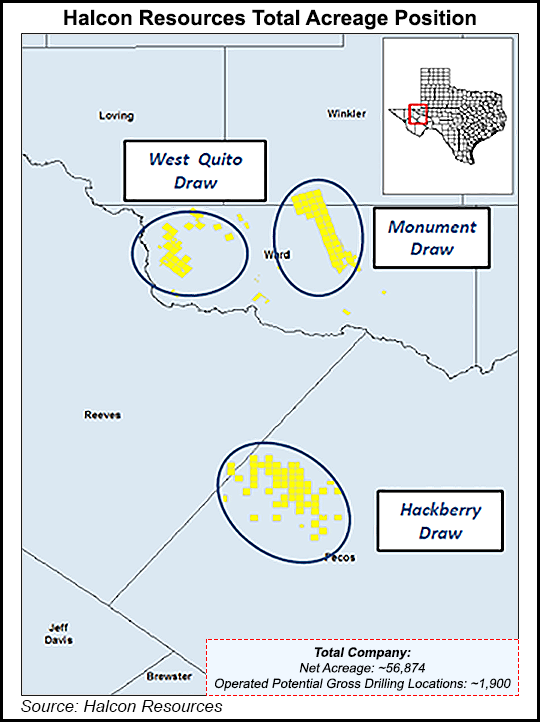 As the Houston-based independent considers its next moves, it plans to run two operated rigs for multi-well pad development in two of its three operating areas in the Permian Basin’s Delaware sub-basin for the rest of the year.

However, Christmas said Tuesday as part of the company’s fourth quarter results that the operations group “is fully intact” under the leadership of COO Jon Wright and was “more focused than ever” on delivering results.

“Going forward, Halcon is laser-focused on cost control and capital efficiency,” Christmas said. “The company will continue to look for ways to improve profitability across all areas of the organization with an emphasis on ensuring we maximize returns while growing production.”

The board members believe “there is significant value in Halcon’s assets, which is not being recognized by the market.” Board meetings with advisers “will include an assessment of value under various go-forward scenarios including a potential sale of select assets, merger and acquisition options and a scenario in which Halcon continues to develop and delineate its assets in the most capital efficient manner possible.”

Halcon will also review alternative financing options to ensure it has sufficient liquidity and financial flexibility going forward. “The engagement of advisers is an effort to ensure we fully investigate every possible option available to maximize value for our shareholders’ benefit,” Christmas said.

The company plans to continue running two operated rigs for the remainder of 2019 in its Monument Draw and West Quito Draw operating areas, both primarily in Ward County, TX. No additional drilling is planned this year in a third operating area, the Hackberry Draw in neighboring Pecos County. Monument Draw covers about 22,216 net acres while West Quito is about 10,829 net acres. The Pecos County play measures about 23,829 net acres.

The first two operated horizontal wells in the southern part of West Quito targeting the Wolfcamp formation, the Apres Vous 1H and Hornsilver 1H, put online in early November, had peak 30-day initial production (IP) rates of 1,656 boe/d and 1,393 boe/d, respectively and completed with lateral lengths of about 9,650 feet. Five additional Wolfcamp wells since have gone online in West Quito.

Halcon recently resumed drilling in Monument Draw, where it had eight wells in various stages of completion at the end of 2018. The company plans to put four wells online by the end of April targeting the Lower Wolfcamp, with laterals of 5,000-7,000 feet. Halcon also plans to bring a previously shut-in well, the Sealy Ranch 7506H, back online in the next few weeks.

Production during 2018 averaged 13,904 boe/d. Halcon transformed itself into a Permian pure-player in 2017 after selling off its operated and nonoperated assets in the Williston Basin and its El Halcon acreage in the Upper Eagle Ford Shale in East Texas.