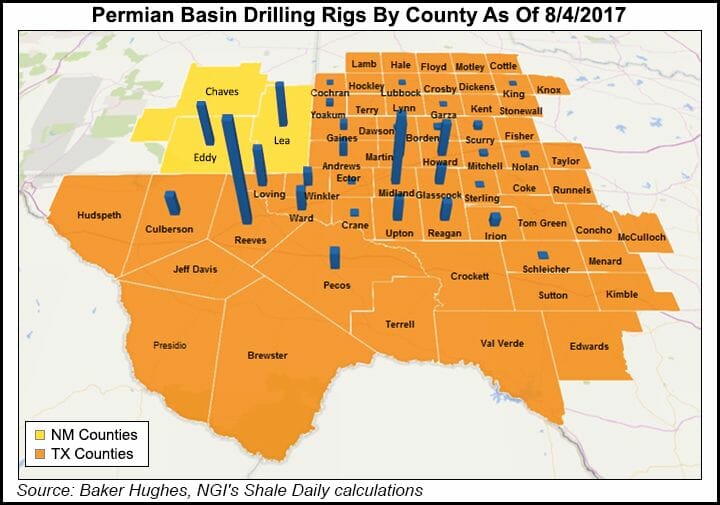 LOEs declined by almost 15% sequentially, from $7.01/boe to $6.01/boe in 2Q2017. The company attributed the decrease to the increase in production volumes, as well as early-day benefits from infrastructure projects materializing throughout the three-month period.

In the Midland sub-basin, Callon during the quarter placed a combined 14 gross (9.7 net) wells into production in three operating areas — Monarch, Ranger and WildHorse — and is on pace to complete about 42 net wells in 2017. Last month, the company deployed a fourth rig in the Delaware sub-basin to drill its Spur prospect, and it still plans to deploy a fifth rig in the play in early 2018.

Second-half 2017 activity “will be well-balanced across our four operating areas, as an ongoing development of Monarch and Wildhorse are supplemented by our first operated wells at Ranger since 2015, and we take off on our development in the Delaware basin,” Callon COO Gary Newberry said during the quarterly earnings call. “Our Spur program will start with two single well pads in the lower Wolfcamp A, as we get our feet wet before transitioning to our typical multi-well pad development during the fourth quarter.”

Newberry also touched on higher GORs in the Permian. He said while the company had seen increased GOR in its legacy assets — such as the East Bloxom Field, in Upton County, TX — it would not impact the drilling for oil. Pioneer Natural Resources Co., during its quarterly conference call earlier this month, caused some consternation about rising GORs in the Permian.

“Over time you may well see an upward mobility or movement toward gas,” Newberry said, adding that all of the new well activity “is really highly oil concentrated. And it will stay that way for several years, before it really gets to steady-state flow and you start to have more and more gas break out in the formation.

“We are very confident about the oil type curve itself. But we are not surprised by a slow increase in GOR. It just does not impact the oil rig.”

Callon is keeping its production guidance for the full-year 2017 unchanged at 22,500-25,500 boe/d. It also affirmed spending $350 million on capital expenditures (capex) for operations during the year.

Diamondback averaged eight operated rigs — three in the southern Delaware, five in the Midland — during the quarter, drilling 34 gross horizontal wells and turning 35 wells into production. It deployed a ninth operated rig in the Midland last May. CEO Travis Stice said the company plans to operate eight or nine rigs for the rest of the year.

“We’re still trying to understand exactly what the return profile is going to look like for the southern Delaware wells,” Stice said during a conference call to discuss results. “As we underwrote acquisitions, we demonstrated, based on the data we had at hand, that the Wolfcamp A competed for capital from some of our better investment opportunities on the Midland Basin side. If that holds true, and we expect it will, then you’ll see us migrate more toward an equal allocation of activity on the Midland Basin side and the Delaware Basin side.

“A key driver of our success in reducing operating expenses is our prior investments in field infrastructure and our production corridors, with water-handling infrastructure providing significant benefits,” operations chief Dan Schooley said in an earnings call Tuesday.

“Maintaining a four-rig program going forward, we would expect to be a little bit better match between the capital and the cash flow,” Foutch said. However, “we’re not going to speculate on any type of transaction, the proceeds from that or the use of that.”

Regarding GORs, Foutch said Laredo hasn’t “always drilled for the best productivity. What we’ve done is really try to drill and make sure we could understand the value creation” by drilling for the best net asset value.

“If the reservoir fluids [are] the same up and down the section, or basically the same or a lot alike, then anywhere you penetrate that and successfully complete any kind of a stimulation, you’re going to have about the same fluid content.”

Laredo’s capex for the full year is unchanged at $530 million, which includes $450 million for drilling and completions.

Like Diamondback, production more than doubled for RSP during the second quarter. The Dallas-based company reported 4.9 million boe (54,341 boe/d) of production in 2Q2017, up from 2.4 million boe (26,407 boe/d) in the year-ago quarter. Oil accounted for 72% of output.

RSP deployed six operated horizontal rigs — four in the Midland, two in the Delaware — during the second quarter, and added a third rig to the Delaware in May. The company drilled 22 wells and completed 18 wells during the quarter. Broken down by play, 10 of the 18 completed wells were in the Midland sub-basin — with five wells targeting the Wolfcamp A, three wells in the Wolfcamp B and two wells in the Lower Spraberry. The remaining eight wells were in the Delaware sub-basin, of which six targeted Wolfcamp A, one was drilled into the emerging Wolfcamp XY horizon, and one targeted the Second Bone Spring formation.

“As we consider our operating strategy and plans going into next year, we will look to closely balance our capital spending with our cash flow generation while remaining flexible to adjust our activity levels to market conditions,” CEO Steve Gray said. “Because of our strong well performance and operating efficiency, we have the capability to continue to grow our annual production volumes on a double-digit basis within cash flow at oil prices below $50/bbl.”