Diamondback Energy Inc. is expanding its leasehold in the Permian Basin with two separate cash and stock deals valued at a combined roughly $3 billion that are seen boosting cash flow and shareholder returns. 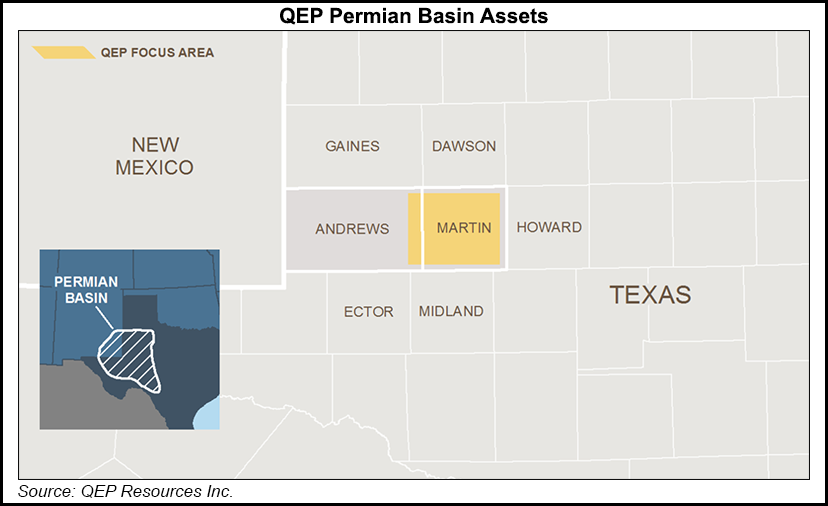 The Midland, TX-based independent agreed to acquire QEP Resources in an all-stock transaction valued at around $2.2 billion, including QEP’s net debt of $1.6 billion. Under the deal, already approved by each company’s board, QEP shareholders would receive 0.05 shares of Diamondback common stock for each share of QEP common stock, representing an implied value to each QEP stockholder of $2.29 per share based on the closing price of Diamondback common stock on Dec. 18.

Diamondback would gain about 49,000 net acres in the Midland Basin, most of which is held by production (HBP), along with midstream infrastructure. The QEP assets also include 48 drilled but uncompleted (DUC) wells, which are expected to be worked down along with Diamondback’s DUC balance in 2021.

The addition of the “Tier-1 resource” competes for capital “right away” in Diamondback’s current portfolio, according to the company chief. He expects to be able to allocate “most capital to the high-returning Midland Basin for the foreseeable future.”

QEP’s Williston assets are to be considered non-core and will likely be used to harvest cash flow or be divested, pending market conditions. Any potential sale proceeds would be used to pay down debt, according to Diamondback.

Enverus analyst Andrew Dittmar said the midstream portion of the QEP transaction likely creates additional dropdown opportunities for Diamondback to its midstream affiliate Rattler Midstream LP. As for QEP, the company found itself in a “tough portion of the market” where it is hard to compete given a lack of scale, despite bringing significant economic assets and supporting midstream infrastructure to the table.

“Shareholders, like the other targets of 2020, have to swallow a no-premium buyout, but they should ultimately benefit from ownership by a larger, top-tier operator like Diamondback,” he said.

Stice in November told investors the company does not need to participate in industry consolidation to simply get bigger. “We participate in corporate development opportunities that we firmly believe will increase the long-term value of our stockholders’ investment.”

To that end, Diamondback also agreed to acquire the leasehold interests and related assets of Guidon Operating LLC in exchange for 10.63 million shares of Diamondback common stock and $375 million in cash.

The Guidon acreage includes about 32,500 net acres in the Northern Midland, which also is primarily HBP. The independent producer, formed in 2016 with funds managed by private equity (PE) Blackstone Energy Partners and CEO Jay Still, has an estimated 395 gross (324 net) horizontal locations with an average lateral length of over 10,500 feet. The asset package also includes eight DUCs. Guidon achieved average production of 17,900 boe/d in the third quarter.

Dittmar noted that the asset valuations have been reworked with a higher percentage of the total value targeting proved developed producing reserves and less being paid for undeveloped land in a lower rig rate environment.

Diamondback expects to fund the cash portion of the acquisition through a combination of cash on hand and existing borrowing capacity under its revolving credit facility. The transaction is expected to close at the end of February.

“As a result of this deal, Diamondback is expected to reduce capital spend on our existing assets and reallocate a portion of that capital to high return projects on the Guidon acreage. Diamondback will not only get bigger through this transaction, but most importantly better,” Stice said.

The QEP transaction is expected to close in the first quarter or early second quarter of 2021.

Upon closing, Diamondback’s board and executive team are to remain unchanged, and the company would continue to be headquartered in Midland.

The tie-ups are the latest in a slew of consolidations that have taken place this year in the exploration and production (E&P) sector amid the historic oil market downturn and Covid-19 pandemic. Dittmar noted that during recent years, pure plays Concho Resources Inc., Pioneer Natural Resources Co. and Diamondback have often been grouped together as the “most significant public pure-plays” in the Permian in terms of scale, fiscal health and operational achievements. “Now, all have been major participants in 2020’s hyperactive upstream corporate mergers and acquisitions market with one — Concho — choosing to exit while both Pioneer and Diamondback have played roles as consolidators.”

The remaining PE-backed E&Ps in the Permian are on the table as potential targets, according to Dittmar. The analyst said while many of these companies were built with plans for an eventual exit via sale to a public E&P, plans have been challenged by the current market.

“In order to get a deal across the finish line, would-be sellers may have to temper expectations on the ratio of cash received versus equity, and the overall valuation on their assets,” he said. “In these situations, finding a buyer like Diamondback whose equity the sponsor is comfortable holding is likely critical.”