Although nearly three-quarters of EnLink Midstream LLC’s 2020 capital expenditures (capex) budget is earmarked for projects in the Permian Basin, a significant portion of projected earnings is expected from Oklahoma, a supply basin often called into question for its returns on investment. 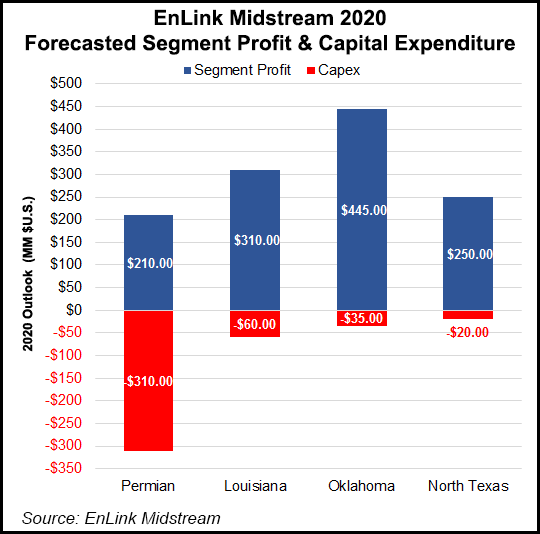 Management for the Dallas-based midstream company last Thursday said during 4Q2019, Oklahoma was the “biggest factor” in terms of operational cost savings, one of the key components of its plan to enhance profitability and drive organizational efficiency.

“That’s part of why we’re guiding to a little bit stronger Oklahoma segment profit than I think people expected us to,” COO Ben Lamb said during a call to discuss the 2020 financial outlook.

The midstreamer is guiding the Oklahoma business segment profit to $435-455 million, nearly unchanged from guidance for 2019. The figure is roughly 35% of EnLink’s aggregate segment profit for the year, with about 10% of total capex expected to be allocated to the segment.

“Given the current commodity environment, Oklahoma is transitioning from a growth area to one that will contribute significant segment free cash flow for us,” Lamb said.

Although the company expects to see a “high single-digit” volumetric decline across its Oklahoma assets, its relatively flat projected profit in the segment is because of a minimum volume commitment with Devon Energy Corp. in the STACK, aka the Sooner Trend of the Anadarko Basin, mostly in Canadian and Kingfisher counties. Devon in 2018 sold its ownership in EnLink Midstream to an affiliate of Global Infrastructure Partners for $3.125 billion.

Devon, which contributed most of its midstream assets to form EnLink, recently announced a joint venture with Dow Inc. to develop the STACK, with 18 wells expected to be drilled this year. However, given the timing of the drilling activity, volumes are not forecast to benefit EnLink’s system until 2021, according to Lamb.

CEO Barry Davis said the distribution analysis was “very targeted” on fully funding the capital projects to sustain and grow earnings with no external funding. “That was No. 1.” Generating excess free cash flow (FCF) also was “an absolute target” for management, with FCF allocated, to high-return projects in core areas. The company has set a target of $10-70 million for excess FCF.

Finally, the company aimed to provide a clear path to its target level of leverage. “Those were our primary objectives, and we believe this is the right level of distributions to achieve those objectives,” Davis said.

EnLink guided net income for 2020 between $160 and $230 million. Projected capex remains unchanged from previously announced guidance of $275-375 million, the midpoint of which is about 50% lower than expected 2019 growth capex. In discussing the $100 million spread between the low and high ends of that range, Lamb said the range is driven primarily by producer activity levels.

“So if we see higher levels, then we’ll expect to spend a bit more, and that will bode well for 2021 and forward. If we see lower activity, then we’ll adjust the spending accordingly.”

EnLink also may consider whether there are opportunities to create ongoing additional cost savings or system efficiencies by making “very efficient expenditures of capital,” including enhancements to its natural gas liquids (NGL) system and low-cost expansions to processing facilities.

Up to one-quarter of EnLink’s budgeted capex is earmarked for an expansion of the Tiger natural gas processing plant in the Delaware sub-basin of the Permian, which is scheduled to enter service in the second half of the year. The company also is planning some debottlenecking and capacity enhancement projects at natural gas processing plants in the Midland sub-basin.

Altogether, the Permian projects make up about 70% of total capex for 2020 and would bring natural gas processing capacity in the basin to more than 1.1 Bcf/d by the end of the year.

Profits from the Permian segment, which was EnLink’s “biggest commercial success” in 4Q2019, are expected to be $200-220 million in 2020, representing about 20% of aggregate segment profit. Growth is expected to be driven primarily by strong producer activity in the Delaware and Midland.

“We see a long runway of growth ahead for our assets in the Permian underpinned by strong producer activity,” Lamb said.

EnLink’s Louisiana assets, especially its NGL business, are expected to turn a profit of $300-320 million in 2020, which would be 25% of the total projected profit. With a full year of contribution from the Cajun-Sibon expansion, which went online in 2Q2019, as well as other enhancements and system upgrades, the company expects to see seasonally stronger results in the first and fourth quarters and lower results in the second and third quarters.

Following the sale of Devon’s position to Thailand’s Banpu Kalnin Ventures (BKV), EnLink expects to amend existing commercial arrangements to enhance the company’s NGL value chain in exchange for a “modest” processing fee reduction on North Texas volumes, management said. The company expects about 15% of total capex to be allocated to Louisiana.

In its North Texas segment, profit is expected to be $240-260 million, down from the expected 2019 results because of a natural volumetric decline in the “mature” Barnett Shale, and because of changes related to the BKV deal, according to management. The figure is expected to represent about 20% of total projected profit, with less than 5% of apex allocated to the segment.

“When you look at the four core areas, we have very different dynamics in each of those areas,” Davis said of EnLink’s operating areas. “I think what we’re seeing as a result of our projections of modest growth is really a testament to the diversity and the difference in the way that those operate: Louisiana being a very stable, demand-facing business; Permian being a high-growth area; and then today, North Texas and Oklahoma being more of a flattish and really pretty easy to project because of the level of activity that we’re seeing there.”

Despite the hefty distribution cut, which is about 34% lower quarter/quarter and 27% lower year/year, it was not as deep as Raymond James & Associates Inc. analysts had projected. The firm had been modeling a cut to 12.5 cents/share, a 50% reduction quarter/quarter. “That said, investors may speculate that Enlink did not cut enough to rapidly improve its leverage ratio if a lower-than-expected” earnings generation scenario were to materialize, analysts said.