Enterprise Products Partners LP said Wednesday it intends to convert one of its natural gas liquids (NGL) pipelines in the Permian Basin to move crude oil to the Texas Gulf Coast by 2020. 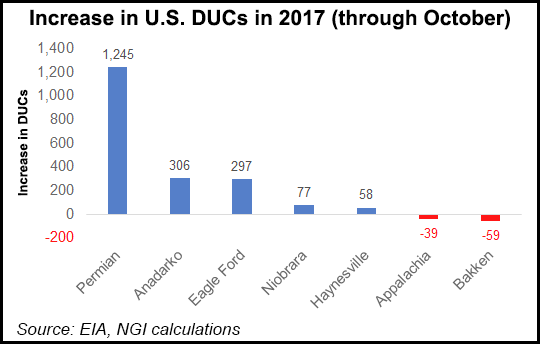 Enterprise already has three existing Permian NGL pipelines that serve producers in West Texas and southeastern New Mexico. The 571-mile Shin Oak NGL pipeline under construction would deliver volumes from the Hobbs fractionation and storage facility in Gaines County, TX, to its complex in Mont Belvieu. The pipeline is expected to be in service by 2Q2019, allowing the company to divert NGLs onto the new pipeline and repurpose an existing liquids pipe for oil.

Enterprise now is evaluating which of the three existing systems, the Seminole Blue, Seminole Red and Chaparral lines, to convert. CEO Jim Teague said the company has seen strong demand for crude oil transportation, storage and marine terminal services in the Permian. The conversion would boost the company’s crude oil capacity to more than 650,000 b/d.

Oil-directed drilling in the play has been red-hot, consistently leading the nation’s rig count by a wide margin and pushing up associated natural gas production. While crude oil takeaway capacity isn’t expected to be an issue in the foreseeable future, midstream operators are working to stay ahead of the curve to address each stream of production.

Wolf Midstream Partners, which was formed in June to take advantage of growth in the Permian, also announced one of its first deals in the play on Wednesday. The company said it has executed a crude oil gathering and transportation agreement with an unnamed independent producer that’s dedicated 25,000 gross acres in West Texas.

To support the agreement, Wolf said it is currently building a 50-mile crude gathering pipeline with a capacity of 55,000 b/d. The system is expected to enter service in 2Q2019.

Wolf said it has also established a delivery point near Colorado City, TX, to construct terminal facilities with interconnects to multiple downstream pipelines. The new system, CEO Curtis Ewers said, will “solidify our position in the Permian region, where we remain very focused on deploying the necessary capital and developing the infrastructure needed to address our customers’ long-term and immediate needs.”