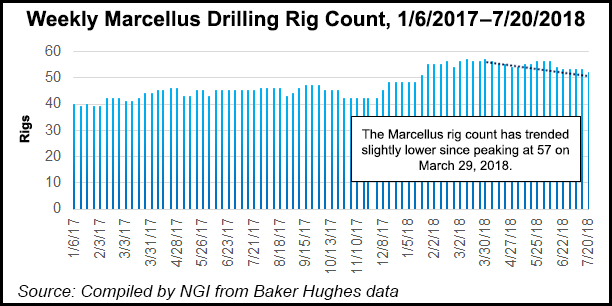 “Despite pricing levels that have yet to fully rebound from the recent downcycle, we are achieving outstanding margins. North America had a strong performance this quarter. This is the largest and fastest growing energy market in the world. On a year-to-date basis, we have grown revenues 47% year/year, while the U.S. land rig count has increased 16%. U.S. land achieved margins that are closing in on what we achieved during the previous peak in 2014.”

A lot of industry chatter of late has been around the coming lack of offtake capacity from the Permian Basin. However, a slowdown is not in sight, Miller said.

“During the last few weeks I visited with customers in the Permian, and they don’t look like a group that’s backing down,” he said. “I can see it in their eyes. They feel good about where they are and how they’re positioned for the long run. Don’t underestimate this group. They are competitive. We’ll figure out how to deal with constraints, and we’ll adapt.”

Miller said he was not “naÃ¯ve to the math around the offtake issue, but as we’ve seen so far, our customers will not all react in the same manner. There are customers that have moved their focus from one basin to another, and we’re there pursuing that work. Other customers plan to reduce activity over the short term or are adding fewer rigs than expected, and we’ll find new work to replace them.”

Compared to what Halliburton has seen in the past regarding offtake constraints, “tightness is an indicator of a great resource, and what is occurring in the Permian today is not new,” said the CEO. Similar challenges were managed in the Williston Basin during the last upcycle and are being handled in the Denver-Julesburg (DJ) Basin today.

“The DJ has suffered constraints on gas takeaway all year, but our customers have managed their businesses and remain productive as have we,” Miller said. “This work may not be as efficient as it could have been, but we’ve taken action to maximize our revenue and control our costs.”

Constraints in the DJ should alleviate in early 2019 as additional offtake capacity comes online.

“The same will be true in the Permian, which is best suited to handle this type of challenge and will do so as quickly as possible,” Miller said. “In the interim, we’re going to keep equipment working, control our costs and outperform our competitors.”

Meanwhile, in the Marcellus Shale, Miller disclosed “some softening in activity, as our customers hit the production targets earlier than planned. In some ways, we’re a victim of our own success, as we develop longer laterals with better production. As a result, we expect this area to have temporary softness in the back half of 2018, but it’s poised to regain activity as the calendar turns to 2019 and additional pipeline capacity is available. We will manage through the year-end and be ready for the increased activity next year.”

These “temporary efficiency drags will create headwinds for additional upward pricing in the third quarter,” Miller warned. “Our competitors’ new and uncontracted equipment is also creating pricing pressure in some areas.”

While fast-growing markets “present tremendous opportunities,” they often result in “temporary challenges,” Miller said. “With the expected activity in the second half of this year, we’re mindful of the impact of cost inflation from trucking and increased maintenance expense. The use of trucking for sand, water and crude oil is generating intense demand for trucks and truck drivers, thus creating cost inflation.”

To offset inflation, Halliburton is managing the trucking costs by using containerized sand and integrated logistics, and “our equipment has never worked harder than it’s working today,” he said. “Increased pumping time and sand loading continues to cause more wear and tear.”

Regarding basin dynamics, Miller attempted to justify why the company is not reacting as swiftly as some analysts have said it should as the market dynamics change.

“We will stay focused on our strategy, maintain our market share and not sacrifice either to achieve our margin goals in the near term. We built market share during the downturn on our strong belief in the long-term potential of the North American market. We are a returns-focused company. To deliver returns, market share and scale matter, we intend to maintain this expanded market position as our scale delivers outsized operating income, cash flow and returns.”

Halliburton’s third quarter earnings are expected to be similar to the second quarter because of the “temporary issues facing North America. That’s a great outcome. I like where we are, and it will serve as an excellent bridge to a strong 2019…The temporary challenges will soon abate, and I believe global supply and demand dynamics will support continued industry growth, which I expect will accelerate in 2019.”

North America revenue came in 9% higher sequentially to $3.8 billion on improvements in the U.S. onshore across most of the product service lines, primarily pressure pumping, drilling and artificial lift activity. Partially offsetting the uptick were lower pressure pumping activity in Canada from the spring thaw and reduced drilling fluid activity in the Gulf of Mexico.

Latin America revenue climbed 5% sequentially to $479 million, mostly because of stronger software sales and project management activity in Mexico, as well as stimulation activity in Argentina.