The decision to plunk down $9.5 billion to purchase Royal Dutch Shell plc’s Permian Basin assets is going to give ConocoPhillips a bountiful and low-cost supply that will be necessary as the world evolves toward a low-carbon future, CEO Ryan Lance said. 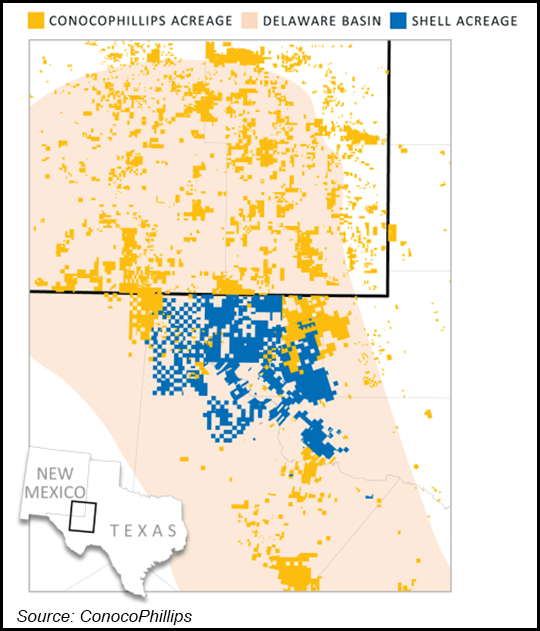 The mega deal announced late Monday is for Shell’s West Texas portfolio within the Delaware sub-basin. It extends across 225,000 net acres. The deal comes only months after ConocoPhillips completed its $9.7 billion takeover of Permian pure-play Concho Resources Inc.

Combined, the two transactions will make “a stronger company, with a powerful 10-year plan that has been positively received by the market,” Lance said during a conference call on Tuesday.

The company in June announced a 10-year strategy plan keyed around an average West Texas intermediate oil price of $50/bbl. At recent strip pricing and estimated 2022 production, ConocoPhillips stands to make hay, Lance said. Next year’s cash from operations from the Shell assets alone could be $2.6 billion, with free cash flow of $1.9 billion, based on a preliminary estimate of 2022 capital.

“The world is going through an energy transition,” but oil and gas demand is going to increase in the medium-term,” Lance said during an interview on Bloomberg TV. “We want to be in the best basins, the lowest-cost of supply basins around the world. And that’s what the Permian Basin represents.”

Rumors about Shell selling the Permian leasehold had been swirling for a few months. ConocoPhillips, the No. 1 exploration and production (E&P) company in the world, was invited by Shell, one of the world’s top integrated producers, to participate in the sales process earlier this year, Lance told investors.

“The bar is very high” for buying assets, he said. When all was said and done, though, the prospect to take over a massive and well-run asset proved irresistible.

Another attraction is the location. The leasehold is “100% on nonfederal land on the Texas side” of the Permian, i.e. private land, he said. That means there would be no threat of any potential federal drilling ban that has been suggested by the Biden administration.

“We were presented with a unique opportunity to add premium assets at a value that meets our strict cost of supply framework and brings financial and operational metrics that are highly accretive to our multi-year plan,” Lance said. “Our financial strength allowed us to structure a competitive offer for this transaction and we are very excited to enhance our position in one of the best basins in the world with the addition of Shell’s high-quality assets and talented workforce.”

The transaction, to be funded with cash on hand, does much more than expand control over the biggest oil and gas field in the country, Lance said. It also “enhances our ability as an E&P company to have a valued role in energy transition by accelerating progress” via its “triple mandate.”

The mandate’s objectives “are to responsibly produce energy to meet transition demand, generate compelling returns on and of capital,” he said.

“This deal hits on all the objectives of our mandate…Most of all, any deal must make the company better…This acquisition handily meets all three criteria.”

ConocoPhillips has laid out environmental, social and governance (ESG) goals that include becoming a net-zero emissions producer by 2050, an ambition advanced with the Shell purchase, according to Lance.

ConocoPhillips initial greenhouse gas intensity goal target for 2030 was to reduce emissions by 35-45%. Incorporating the Shell assets, which basically enlarges the portfolio, would allow it to increase the reduction target to 40-50% from the 2016 baseline, on both a net equity and gross operated basis.

Along with the acreage, the Shell assets have more than 600 miles of operated crude, natural gas and water pipelines, as well as infrastructure. Estimated 2022 production is 200,000 boe/d, roughly half of which is operated. Occidental Petroleum Corp. (Oxy) has partnered with Shell in the Permian.

With the purchase, more assets are going to be sold, Lance said. The targeted level of dispositions has been increased to $4-5 billion by 2023 from $2-3 billion. Around half of the projected sales “are expected to be sourced primarily from the Permian Basin as part of the company’s ongoing portfolio high-grading efforts,” he said.

The company should thrive through a combination of “resilience, returns and ESG excellence. That’s the combination it will take to adapt, thrive and win in the new energy future.”

To sweeten shareholder enthusiasm, ConocoPhillips has bumped up its quarterly dividend by 3 cents to 46 cents/share.

The decision to increase shareholder returns and strengthen the 10-year plan makes the deal a positive, energy analysts said Tuesday.

“On a valuation basis, the $15,600/acre net purchase price (after backing out production value) amounts to an impressively low” 2022 earnings multiple, said Raymond James & Associates Inc. analyst John Freeman. BMO Capital Markets analyst Phillip Jungwirth called the purchase “compelling in many ways.” It is “highly accretive on all metrics,” including shareholder distributions and return on capital employed. In addition, ConocoPhillips is maintaining its “balance sheet strength.”

The Shell portfolio, said Jungwirth, “is top-tier within the Delaware and competes for capital.” In addition, ConocoPhillips’ track record of returning capital (8% in 2021) is unmatched.”

The BMO analyst said investors may push back on the size of the nonoperated position, controlled in part by Houston-based Oxy. However, ConocoPhillips would operate 50% of 2022 volumes, “above our expectations.” Oxy also is a “top-tier operator in the basin” and would prioritize capital in the joint venture.

Enverus senior merger and acquisition analyst Andrew Dittmar noted that ConocoPhillips had “waited patiently” for opportunities “through the land-rush years of the shale boom.” It’s now “been able to pick up prime Permian real estate at what looks to be attractive price points.”