Down, down West Texas spot prices go. Where they stop, nobody knows. 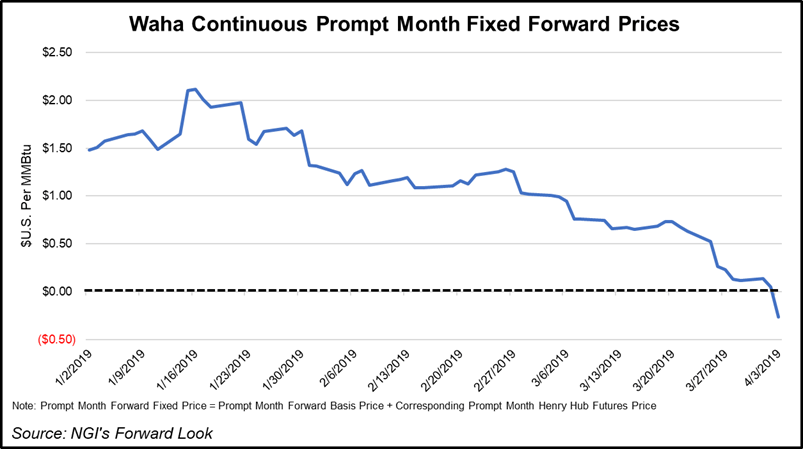 In a clear illustration of the potential inverse relationship between crude oil and natural gas prices amid supply growth in the U.S. onshore, a glut of associated gas output continued to crush spot prices in the Permian Basin on Tuesday.

Day-ahead deals at the Waha hub were priced as low as negative $6.600/MMBtu Tuesday, dropping well below the previous record-setting nadir of $2.500 observed only last week. Waha finished Tuesday’s trading averaging a jaw-dropping negative $3.610, according to Daily GPI.

“To fall from this already unheard-of negative average by more than an additional $3 highlights the uniqueness of the current price environment in the highly constrained Permian. Permian hubs in addition to Waha — such as El Paso Permian and Transwestern — have moved similarly into completely uncharted territory.

“Our Permian production estimate has been down somewhat over the last several days compared to March’s monthly average, but as is typical for the beginning of the month, we have also seen upward revisions to these numbers,” Bernardi said.

Implying that market participants don’t expect the outlook for West Texas gas prices to improve anytime soon, the recent unprecedented price weakness in the Permian has spilled into forwards trading.

“Following a trajectory that resembles a jet airliner that has lost engine power, Waha prompt month forward prices have finally broken into negative territory in fixed price terms,” NGI’s Nate Harrison, markets analyst, said Wednesday. In Tuesday’s trading, “Waha forward basis prices for May reached a new low of minus $2.945, which translates to a fixed price of minus 26.1 cents.

“While prices remain in positive territory so far for June, the second month contract hangs by a thread and could also drop into the negatives as well.”

Harrison pointed to “three moving pieces” that are influencing the pricing dynamics in the Permian at the moment. The first is continued strong production and limited pipeline takeaway. At the same time, crude prices have topped $60/bbl and continue to move higher.

“Even if Waha basis remained flat, a sharp decline in futures could push/keep prices negative at least into June.”

The extreme negative gas prices in the Permian on Tuesday seemed to surprise even prognosticators like RBN Energy LLC’s Rusty Braziel, who warned in 2017 of the potential for negative prices in West Texas.

In a web presentation two years ago, Braziel noted that crude producers had gas breakeven prices that were “far lower” than gas-focused producers, ranging from negative $10/MMBtu up to a $1/MMBtu in the Permian and in Oklahoma’s SCOOP (aka, the South Central Oklahoma Oil Province) and STACK (aka, the Sooner Trend of the Anadarko Basin, mostly in Canadian and Kingfisher counties).

“What I’m saying here is that at $50/bbl crude oil prices, many producers in the Permian and SCOOP/STACK can afford to pay someone to take their gas and still break even, not that they would, mind you…but they could,” Braziel said back in 2017.

As it turns out, they would.

During a web presentation on Tuesday to RBN subscribers, Braziel was asked how much lower prices could go after dropping below negative $6.000 during trading earlier in the day.

“Gee, I don’t know. I probably wouldn’t have forecasted negative $6.50” prior to Tuesday, Braziel said. “Never before have we seen gas takeaway constrained the way it is in the Permian, where the producer economics are being primarily driven by crude oil…

“That just means that gas has become something to be disposed of, just like produced water is to be disposed of. It certainly breaks our models, so in terms of taking a guess about where this is going to go, I wouldn’t have a clue. But I guess it could get worse.”

“Relief is coming, in the form of new pipes,” Braziel said. “Unfortunately, not right away.”

“GCX is going to take a lot of pressure off Permian pipes, but it’s not going to last long,” Braziel said. “We expect that the pipe is probably going to fill up within the next nine months, maybe sooner. At that point, there’s a pretty good chance the Permian’s going to be right back in the same fix that it is now.” After GCX, “there’s another pipe that is expected to come to the rescue.”

That would be the 2 Bcf/d Permian Highway Pipeline (PHP), a project of Kinder Morgan Texas Pipeline LLC and EagleClaw Midstream Ventures LLC that is set to come online in the second half of 2020.

EagleClaw on Wednesday also pulled the trigger on Delaware Link, a pipeline with at least 1.2 Bcf/d of capacity that would transport residue gas from the Permian to the Waha hub, with access to downstream takeaway connections. Interconnections would include direct access to PHP.

Once online, PHP could take the pressure off of Permian gas constraints for another one to two years, according to Braziel. Eventually another pipe likely would be required, and there’s a list of potential projects in the works.

“Who gets built and when that gets built is going to have a big impact on the Permian market,” Braziel said. “The implication is that there’s going to be a continuing roller coaster for Permian basis, Permian prices, as far as you can see.”