A consortium of oil and natural gas firms is moving forward with plans to develop a greenfield 2.5 Bcf/d intrastate natural gas pipeline from the Permian Basin in West Texas to the Katy area, near Houston. The project still needs state approvals. 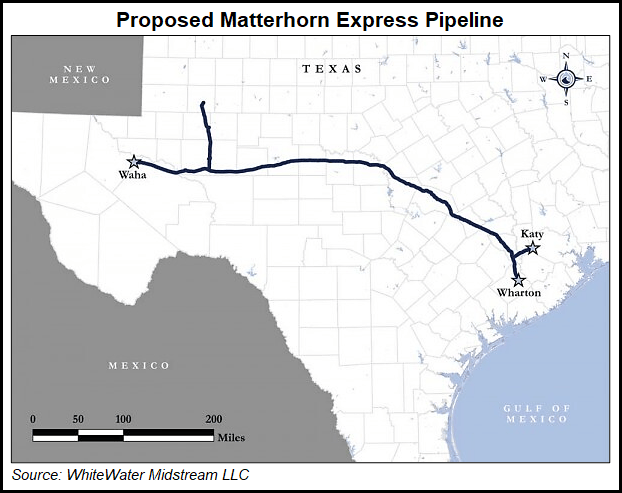 Matterhorn is expected to be in service in the second half of 2024, pending regulatory approvals.

WhiteWater CEO Christer Rundlof touted the company’s partnership with EnLink, Devon and MPLX in developing “incremental gas transportation out of the Permian Basin as production continues to grow in West Texas.” The CEO said Matterhorn would provide “premium market access with superior flexibility for Permian Basin shippers while playing a critical role in minimizing flared volumes.”

Oklahoma-based Devon, one of the Permian’s top producers, recently said it expects Permian production to reach nearly 600,000 boe/d in the second quarter.

Matterhorn joins a growing list of pipeline projects, largely expansions, aimed at capturing growing volumes of Permian supply to send to downstream markets. Constraints in existing takeaway capacity are widely expected to emerge next year, which could lead to negative pricing in the basin.

WhiteWater said earlier this month it planned to expand the Whistler Pipeline’s capacity by about 0.5 Bcf/d, to 2.5 Bcf/d, with three new compressor stations. The additional stations are scheduled to be in service by September 2023. Whistler moves gas from Waha to Agua Dulce, in South Texas, via a 450-mile, 42-inch diameter pipeline.

KMI also completed a binding open season for the Permian Highway Pipeline (PHP) earlier this month, with a foundation shipper already in place for half of the planned 650 MMcf/d expansion capacity. KMI is targeting an October 2023 in-service date.

Previously, KMI had floated the idea of building another greenfield project, to be called Permian Pass. Energy Transfer LP also has discussed the potential to construct the Warrior Pipeline, which would move 1.5-2.0 Bcf/d of gas from the Permian toward Dallas, where it would access existing pipes to the Gulf Coast.

The host of potential expansions come as the Energy Information Administration (EIA) is calling for Permian production to continue growing. In the latest Drilling Productivity Report issued earlier this month, the EIA said Permian output is set to grow by 169 MMcf/d from May to June, reaching 20 Bcf/d.