Reduced oil and gas production in the Permian Basin, combined with record-low levels of completions activity, should lead to historically low levels of gas flaring in the last half of 2020, according to Rystad Energy. 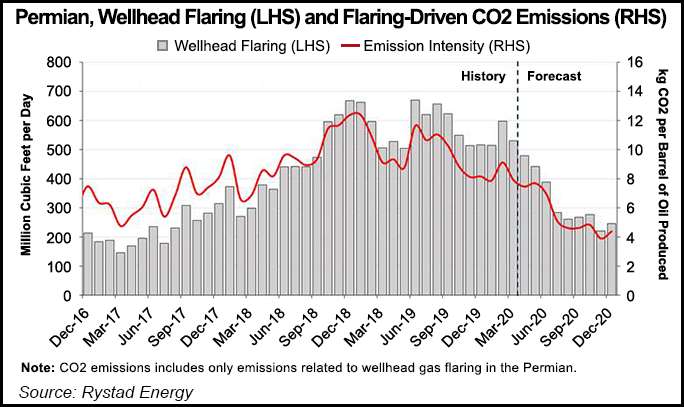 In March, the Permian saw the first signs of activity slowdown caused by the implications of coronavirus and the oil price wars, evidenced by shut-in wells and reduced activity.

According to Rystad, flaring-driven emission intensity will be at even lower levels of 3.9 kg of CO2/boe in November.

“In 2Q2020 a material part of Permian oil production is being curtailed, resulting in an abnormal oil production decline that is supporting emission intensity at a level of 7-8 kg CO2/boe, despite continuous deceleration in flaring,” said Rystad’s Artem Abramov, head of Shale Research. “However, assuming that most volumes are brought back in the second half of 2020, we anticipate a significant downward shift in flaring-driven emission intensity.”

In February, CEO Scott Sheffield of Permian pure-play Pioneer Natural Resources Co. urged exploration and production (E&P) operators to reduce gas flaring rates below 2% or risk investor ire. In 3Q2019, gas flaring and venting in the Permian reached an all-time high, averaging more than 750 MMcf/d. Rystad’s analyses showed that more than half of the Permian E&Ps have improved flaring intensity, as 10 flared less than 1% of gas produced in 1Q2020.

Now, as fracturing/completions activity in the basin has fallen to record-low levels, Rystad predicted that in the last half of this year there are likely to be few new production additions. That could mean wellhead flaring may fall by more than half of the levels seen last November, when flaring was slightly more than 500 MMcf/d. March represented the start of a decline, with gas flaring at around 460 MMcf/d, according to Rystad.