Although Gulf Coast LNG exports are expected to drive the bulk of U.S. natural gas demand growth in the coming years, Mexico and Arizona could play vital roles in easing natural gas takeaway constraints out of the Permian Basin, according to NGI’s Patrick Rau, director of strategy and research. 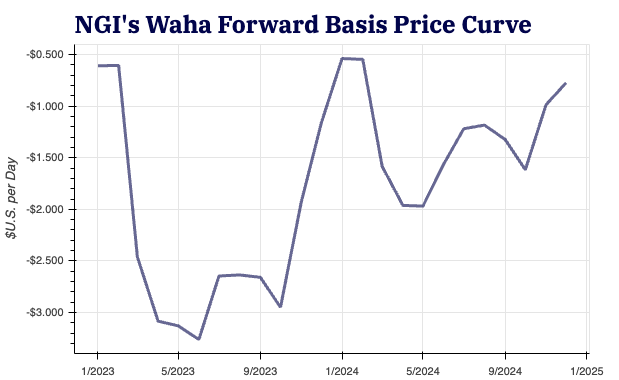 As evidenced by Waha spot prices dipping into negative territory this week, “egress is once again becoming very tight” out of the Permian, Rau said on a recent episode of the Hub and Flow Podcast.

While these projects helped to ease takeaway congestion, Permian natural gas production has grown by about 2.1 Bcf/d so far this year, Rau noted, far more than any other producing region in the Lower 48. The Energy Information Administration this week also revised upward its U.S. gas production forecast for 2023, driven largely by the Permian.

A 550 MMcf/d expansion of PHP is slated to enter service in late 2023, followed by the 2.5 Bcf/d Matterhorn Express pipeline in the second half of 2024, which would supply gas to Katy.

“It’s of little wonder that so much Permian gas has been headed east towards the Gulf of Mexico, considering 80% or more of incremental Lower 48 demand for natural gas through 2030 is expected to come from the Gulf Coast,” Rau said.

However, developments to the west and south “could have major implications on future gas flows from West Texas.”

These developments include “a renewed spirit and willingness” by Mexico’s Comisión Federal de Electricidad (CFE) “to work with foreign entities,” Rau said. The state-owned power generator is Mexico’s largest consumer and marketer of natural gas, procuring essentially all of its supplies via pipeline from the United States.

Its international fuel procurement arm, CFE International LLC (CFEi), transacted 3.8 Bcf/d during the second quarter, according to an NGI survey.

Speaking in November at the LDC US-Mexico Natural Gas Forum in San Antonio, CFEi CEO Miguel Reyes told the audience that, “We’re working together in partnerships and within the framework of Mexican law to take advantage of excess natural gas capacity…”

CFE, as the anchor shipper, has commissioned about 3 Bcf/d of pipeline capacity to be built that would connect West Texas supply with demand centers in Mexico. However, NGI estimates less than half of that capacity is currently being used, Rau said.

These projects, such as Sempra’s Energía Costa Azul Phase 1 liquefaction terminal, would be “massively in the money” if they entered service today, Rau said, because of high gas prices in Europe and Asia.

On the U.S. side of the border, Rau cited recent comments by Kinder Morgan Inc. management that it is exploring the potential for a natural gas storage project in Arizona.

“We believe that this is potentially hugely significant for a number of reasons,” Rau said. For one, it “could alleviate some of the pressure in California following the reduced capacity” at the Aliso Canyon storage facility in Los Angeles County.

It also could provide extra protection in the event of another freeze-off in West Texas similar to what happened during Winter Storm Uri in 2021.

In addition, underground storage in Arizona could facilitate intermittent service on the El Paso Natural Gas system as the share of variable output wind and solar generation continues to grow.

Storage capacity in Arizona also could serve the Mexican market, which lacks storage of its own, Rau said.

Finally, it could serve as an outlet for gas production from the Rockies region of the United States, according to Rau.

TC Energy Corp.’s Stanley Chapman III, vice president for U.S. and Mexico natural gas pipelines, also said recently that discussions have begun around a “strategic gas reserve, which would be supported by U.S. gas storage, recently commenced with various parties to ensure Mexican demand could be met without interruption, particularly on peak days.”