Houston-based EagleClaw Midstream LLC has joined its midstream peers in announcing plans to reach net-zero emissions by no later than 2050. 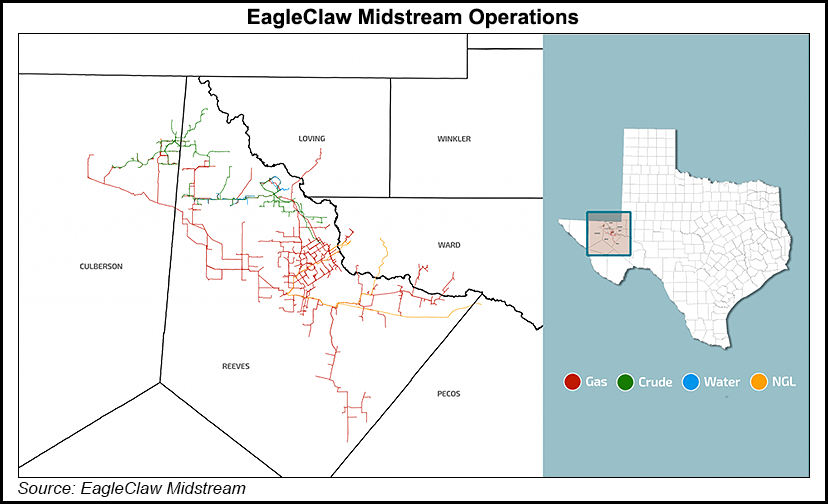 “We are grateful to have incredibly talented and committed employees, suppliers and customers who all share our vision of working together to collectively stem the impacts of climate change for future generations,” CEO Jamie Welch said.

Other midstream firms such as Tulsa-based Williams have previously announced net zero goals. In January, the Interstate Natural Gas Association of America also made a commitment to work toward achieving net zero carbon emissions from their members’ domestic gas transmission and storage assets by 2050.

EagleClaw is the largest private gas processor in the Permian Basin’s Delaware sub-basin, with 1,320 MMcf/day of capacity and more than 1,400 miles of operated pipelines. It provides gas, crude and water midstream services for about 30 producers. It also is a partner on the Permian Highway Pipeline project.

In its first environmental, social and governance (ESG) report, the company outlined plans to migrate a significant portion of its company vehicle fleet to electric over the next several years. It also plans to  invest further in emissions monitoring, control and reduction equipment. Plans also are underway to expand use of electric compression across its system where feasible, as well as explore possible funding from the Department of Energy to evaluate the potential for carbon capture technologies.

In addition, EagleClaw in the coming year has plans to implement a performance bonus structure for all its employees, tying 20% of bonuses to the achievement of ESG goals.