As the oil and natural industry pivots toward producing cleaner energy and controlling emissions, an analysis by a Texas association of independent producers and royalty owners found that methane intensity in the Permian Basin has declined from 2011-2019 even as production surged to record levels. 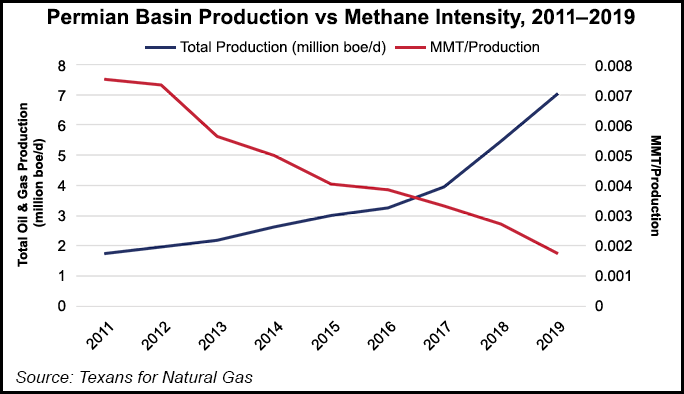 Conducted by Texans for Natural Gas, a project of the Texas Independent Producers and Royalty Owners Association (TIPRO), the analysis found that between 2011 and 2019, methane emissions intensity fell by 77% in the Permian. At the same time, oil production in the basin increased by over 300%, with the production of oil and natural gas surpassing 7 million boe/d in 2019 alone.

The analysis, “Flaring Progress in the Permian: Leading the World,” also used data from the World Bank to determine how the West Texas/southeastern New Mexico play stacked up against other major energy producing countries. It found that if the Permian were its own country, it would not rank among the 30 worst energy producers in flaring intensity and would have a lower intensity than other major producers like Algeria, Venezuela, Iran and Russia.

Flaring intensity is measured as natural gas flared/barrel of oil production, so the lower the number, the less gas is being flared.

Oil and gas exploration and production companies in the Permian have acknowledged the low methane intensity in the basin, but some have indicated that more work needs to be done.

ConocoPhillips, which following its $9.7 billion acquisition of Concho Resources Inc. is now among the biggest players in the Permian, announced its intention last year to reduce operational greenhouse gas (GHG) emissions intensity by 35-45% by 2030. This was a revision from the previous goal of 5-15%.

The Houston-based super independent also pledged to reach net zero emissions by 2050, by way of emissions offsets and carbon capture, utilization and sequestration. ConocoPhillips has said it was the first U.S. operator to unveil an emissions strategy aligned with the United Nations climate accord, aka the Paris agreement.

Another Permian giant, Pioneer Natural Resources Co., has stressed the importance of curbing routine natural gas flaring, which remains a stubborn challenge in the Permian despite progress made on reducing flaring intensity. The company, which joined forces last year with Parsley Energy Inc., has set a goal to reduce GHG emissions intensity by 25% and methane emissions intensity by 40% by 2030.

In addition, the company has adopted a goal to maintain the flaring intensity to less than 1% of natural gas produced. It plans to end routine flaring by 2025.

As the U.S. oil and gas industry continues to show “quantifiable progress” in reducing energy emissions, having data that tells the full story is critical, according to Longanecker. It helps provide a “roadmap where we can, and need, to improve.”

The executive also said the analysis on flaring provided “much-needed context to the current debate on methane emissions and flaring.” He noted the cancellation of the potential $7 billion, 20-year contract between French energy company Engie SA and NextDecade Corp. for purchasing liquefied natural gas (LNG) from the proposed Rio Grande export facility in Texas.

The French government, which had concerns about hydraulic fracturing, owns a 23.63% share in Engie. The proposed deal was slated to run until 2045, meaning that exports from the project would have started in 2026.

The TIPRO analysis did not include 2020 data and does not reflect the impact of Covid-19 on oil and gas production and emissions. However, a recent study by Rystad Energy found that although flaring and venting are forecast to climb as production recovers from last year’s pandemic-induced slump, the industry may be able to eliminate most of the routine emissions at little cost.

Meanwhile, the Texas Methane & Flaring Coalition, made up of seven trade associations and more than 40 top operators, announced plans to rid the state of natural gas flaring by 2030.