Oil-focused declines in Texas and Colorado paced a sharp 10-rig drop in the U.S. rig count for the week ended Friday (March 29), according to data from Baker Hughes, a GE Company (BHGE). 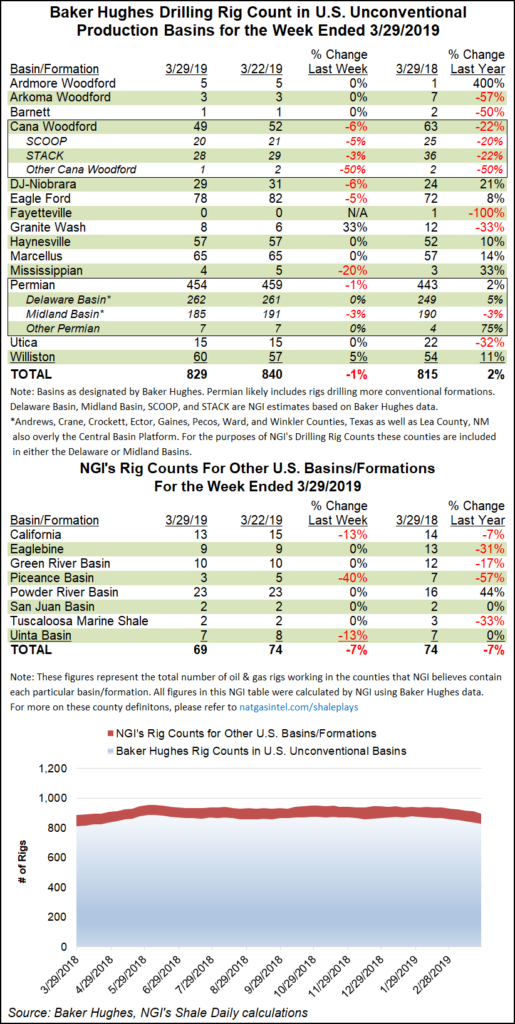 The departure of eight oil-directed rigs and two natural gas-directed units left the combined U.S. count at 1,006 as of Friday, only 13 units above its year-ago total of 993, BHGE data show.

A drop-off in onshore activity drove the week’s domestic declines, with 12 land units packing up shop. One unit exited inland waters. The Gulf of Mexico saw three rigs return to work, boosting its total to 23, up from 12 at this time last year. Nine horizontal units exited the patch, along with two vertical, while one directional unit returned.

In Canada, 17 units — 14 oil-directed and three gas-directed — departed for the week, putting the count at 88, well behind the 134 rigs running in the year-ago period. The combined North American rig count finished the week at 1,094, down from 1,127 a year ago.

Among plays, the Permian posted the largest week/week drop as five units packed up, putting its total at 454. The Permian still showed a year/year increase versus the 443 rigs active in the year-ago period.

The Eagle Ford Shale also saw a large drop for the week, according to BHGE, down four rigs to 78 but up from 72 a year ago.

Also among plays, the Cana Woodford count fell three rigs, while the Denver Julesburg-Niobrara dropped two and the Mississippian Lime fell by one. The Williston Basin added three rigs to its total for the week, while the Granite Wash added two.

Among states, amid a drop-off in both the Eagle Ford and Permian, the latest Texas tally took a hit, down six rigs week/week to 491. That’s slightly below the 496 rigs active in the Lone Star State at this time last year, according to BHGE.

Colorado saw four rigs pack up shop overall, while three units departed in Alaska. Louisiana and North Dakota each added three rigs for the week, while California dropped two. Oklahoma and Utah each dropped one from their respective tallies.

While Permian drilling activity declined for the week, production in the play has been on the rise, a trend that has helped pull the floor out from under the region’s natural gas spot market, sending prices deep into negative territory.

As analysts have pointed out, it’s largely crude economics that drive producer decision-making in West Texas and southeastern New Mexico. As of Friday, front month New York Mercantile Exchange West Texas Intermediate futures were trading back above the $60/bbl mark. And according to analysts, U.S. oil sanctions could pose significant upside price risk in 2019.

If the recent strength in crude leads to more of the kind of associated gas output observed in the Permian recently, that could be a bearish sign for West Texas natural gas prices.

Compared to dry gas basins, “the Permian is a different animal entirely, with most of the region driven by crude oil economics, a reality that suggests negatively priced gas is merely an added cost that is deducted from a well’s overall profitability,” RBN Energy LLC analyst Jason Ferguson said earlier in the week. “For most Permian oil wells, gas prices would have to fall much further than we have already seen to cause producers to shut in the well.”

This is the key reason why “we think it likely that the worst pricing may still be ahead and wouldn’t be surprised if Waha trades even further into negative territory than it did this week.”